The Delhi-Katra Vande Bharat express came back on track in July after shutting operations for month due to surge in Covid-19 pandemic. (Representative Image: Shutterstock)

Indian Railways has resumed catering services on board Vande Bharat Express between Delhi and Katra from November 28. The catering for the train is also proposed for Sattvik certification. With Sattvik certification, the Indian Railway Catering and Tourism Corporation (IRCTC) plans to introduce services that fit the requirements of vegetarians and promotes vegan travelling to holy destinations.

Earlier this month, the Indian Railway Catering and Tourism Corporation (IRCTC) has decided to resume catering services with cooked food in premium trains including Rajdhani, Shatabdi, Duronto, Vande Bharat, Tejas and Gatiman Express. The Delhi-Katra Vande Bharat express came back on track in July after shutting operations for month due to surge in Covid-19 pandemic. 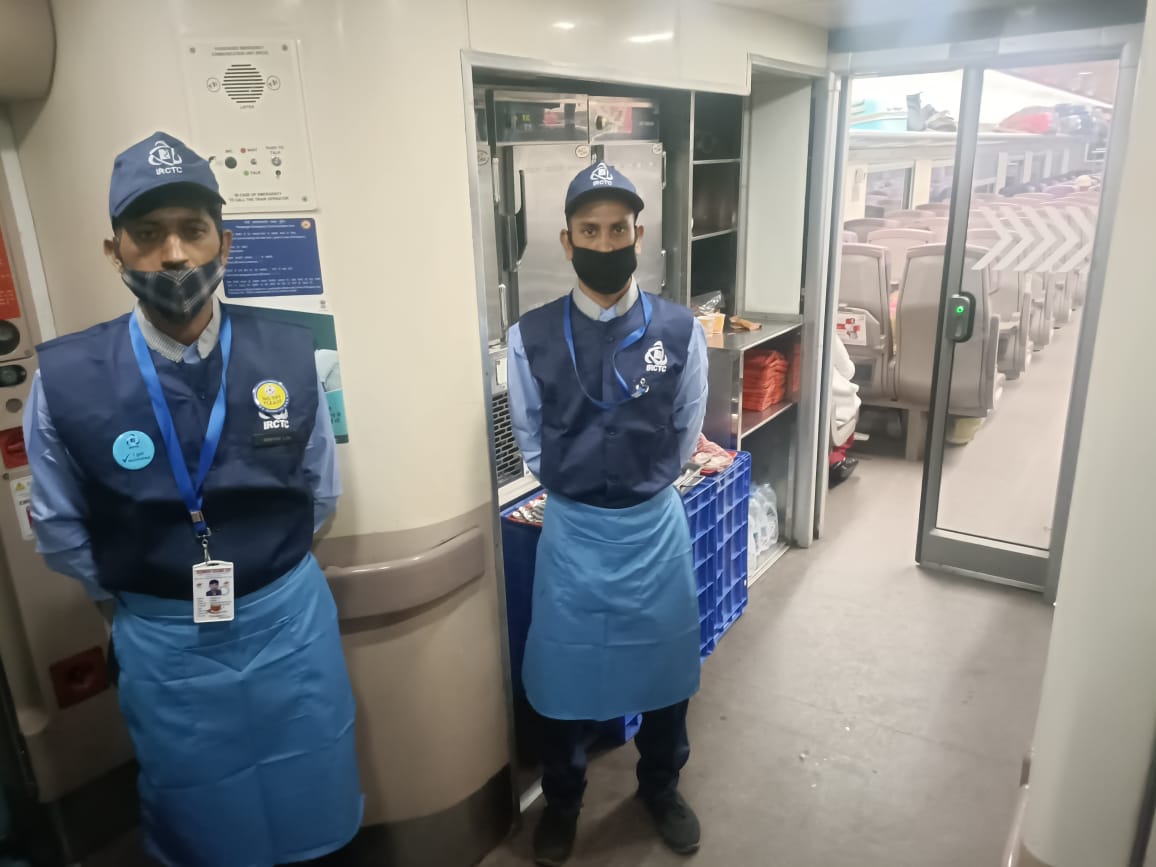 Vande Bharat is a high-speed train which was introduced on 17 February 2019. The train has 16 passenger cars, with a seating capacity of an impressive 1,128 passengers. The Vande Bharat Express train was built under the ‘Make in India’ initiative of the Central government at the Integral Coach Factory in Perambur near Chennai. Prime Minister Narendra Modi, during his address to the nation on 75th Independence Day, had announced that 75 Vande Bharat Express trains will be launched by 15 August 2023. “75 new Vande Bharat express trains will connect every corner of the country in 75 weeks of Azadi Ka Amrit Mahotsav,” the Prime Minister had said in his August 15 address from the Red Fort in Delhi.

The luxury all air-conditioned chair car service with 16 coaches is an engine-less self-propelled trainset which allows for faster acceleration and deceleration, therefore reducing travel time by 40 per cent. The train has plastic bottle crusher machines, a spacious pantry with a deep freezer, revolving seats and cattle guard among other features. The train boasts of having bottle crushing machines for disposing off plastic bottles. It also has revolving seats that can be turned around to 180 degrees, 16 air conditioned coaches, including two executive class coaches and sensor doors that connect the coaches.

The train has continuous windows and the glasses have been provided with anti-spall films. Anti-spall films are a protective coating specifically designed to protect the window panes from the elements and protect passengers from any fragmentation.

Roller blind sun screen, which significantly reduce the sun’s glare whilst still allowing light through has been provided on the look out glass to protect train pilots from glare and improved insulation has been provided to reduce noise level in the driver’s cab.

It also has windows with a special provision to protect against stone-pelting and a cattle guard in the front to prevent damage to the train or derailment in case of cattle run.

HERE’S HOW ONE CAN PLACE A FOOD ORDER THROUGH IRCTC’S OFFICIAL WEBSITE:

Step 2: Enter your ten-digit PNR number and click on the arrow to proceed further

Step 3: Select the food from the list of cafes, outlets and quick service restaurants available there.

Step 4: Place the order and select the payment mode. Either, you can choose to pay online or cash on delivery.

Step 5: Once the order is placed, the food will be delivered to your seat/berth.