India could become a 2 billion-plus country in the next 35 years, argues Manu Gaur. Photo for representation: Reuters

The population of India, however, has nearly doubled since 1980 while that of China has increased by 42%. 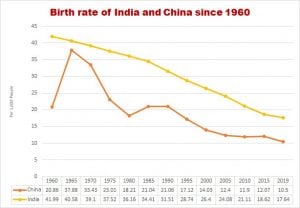 Birth rate of India and China since 1960

The drop in the birth rate in India was more consistent and steeper when compared to China. The gap between the birth rate of the two countries has also narrowed over the years.

Total fertility rate is the average number of children born to a woman in her reproductive years and birth rate is the number of individuals born in a population in a given amount of time.

China introduced the one-child policy in 1979. It switched to two-child policy in 2016. Now, the country has allowed couples to have three children after the census data showed a steep decline in birth rate.

What was China’s one-child policy and why was it introduced?

China introduced its one-child policy as the country was concerned that the growing population would impede economic progress.

The policy implementation was strict and families that violated the rules faced fines, loss of employment and even forced abortions. In rural areas, families were allowed to have two children if the first was a girl. Two or more children were allowed for ethnic minorities. 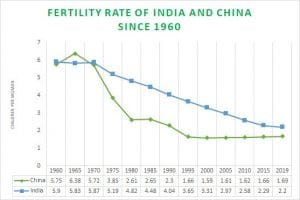 Fertility rate of India and China since 1960

Another reason for scrapping the one-child policy was the fear of China’s shrinking workforce. According to the latest census data, Chinese people aged 60 or above accounted for 18.7% of the country’s total population in 2020, 5.44 percentage points higher than that in 2010.

The country felt the increasing elderly population will reduce supply in the labour force while increasing the burden on families’ elderly care and the pressure on the supply of basic public services.

It is believed that the one-child policy led to forced abortions, female infanticide, and the under-reporting of female births. It was also implicated as a cause of China’s gender imbalance. In 1962, the number of boys born per girl was 1.07. This increased to 1.17 in 2007 – that means about 117 boys were born for every 100 girls born.

In 2019, the global male birth per female birth was 1.06. China is believed to have one of the most skewed sex ratios in the world – 1.12 boys born per girl.

This year in May, China further relaxed its family planning policy and announced it will be supporting couples who wish to have a third child after the census data showed population growth slipping to its slowest rate since the 1950s.

However, the population of India has nearly doubled since 1980 while that of China has increased by 42%. 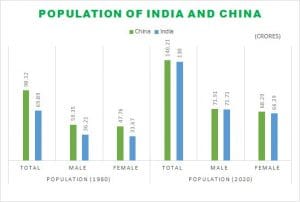 Population of India and China