It took 110 days for coronavirus infections in the country to reach one lakh, while just 44 days more to go past the six-lakh mark.

India's COVID-19 tally zoomed past six lakh on Thursday with a single-day increase of 19,148 cases, just five days after it crossed the five-lakh mark, while the death toll rose to 17,834, according to the Union Health Ministry data.

It took 110 days for coronavirus infections in the country to reach one lakh, while just 44 days more to go past the six-lakh mark.

The country's COVID-19 caseload increased to 6,04,641 on Thursday, while 434 persons have succumbed to the disease in the last 24 hours, the data updated at 8 am showed.

With a steady rise, the number of recoveries stands at 3,59, 859 while one patient has migrated. There are 2,26,947 active cases of coronavirus infection presently in the country.

"Thus, around 59.52 per cent of patients have recovered so far," an official said.

This is the sixth consecutive day when coronavirus infections increased by more than 18,000. There has been a surge of 4,14,106 COVID-19 cases from June 1 till date.

According to the ICMR, the number of tests for detection of the disease crossed the nine million-mark on Thursday.

Of the 434 deaths reported in the last 24 hours, 198 are from Maharashtra, 63 from Tamil Nadu, 61 from Delhi, 21 each from Uttar Pradesh and Gujarat, 15 from West Bengal, nine from Madhya Pradesh, eight from Rajasthan, seven each from Telangana and Karnataka, six from Andhra Pradesh, five from Punjab, four each from Haryana and Jammu and Kashmir, three from Bihar and one each from Chhattisgarh and Goa. 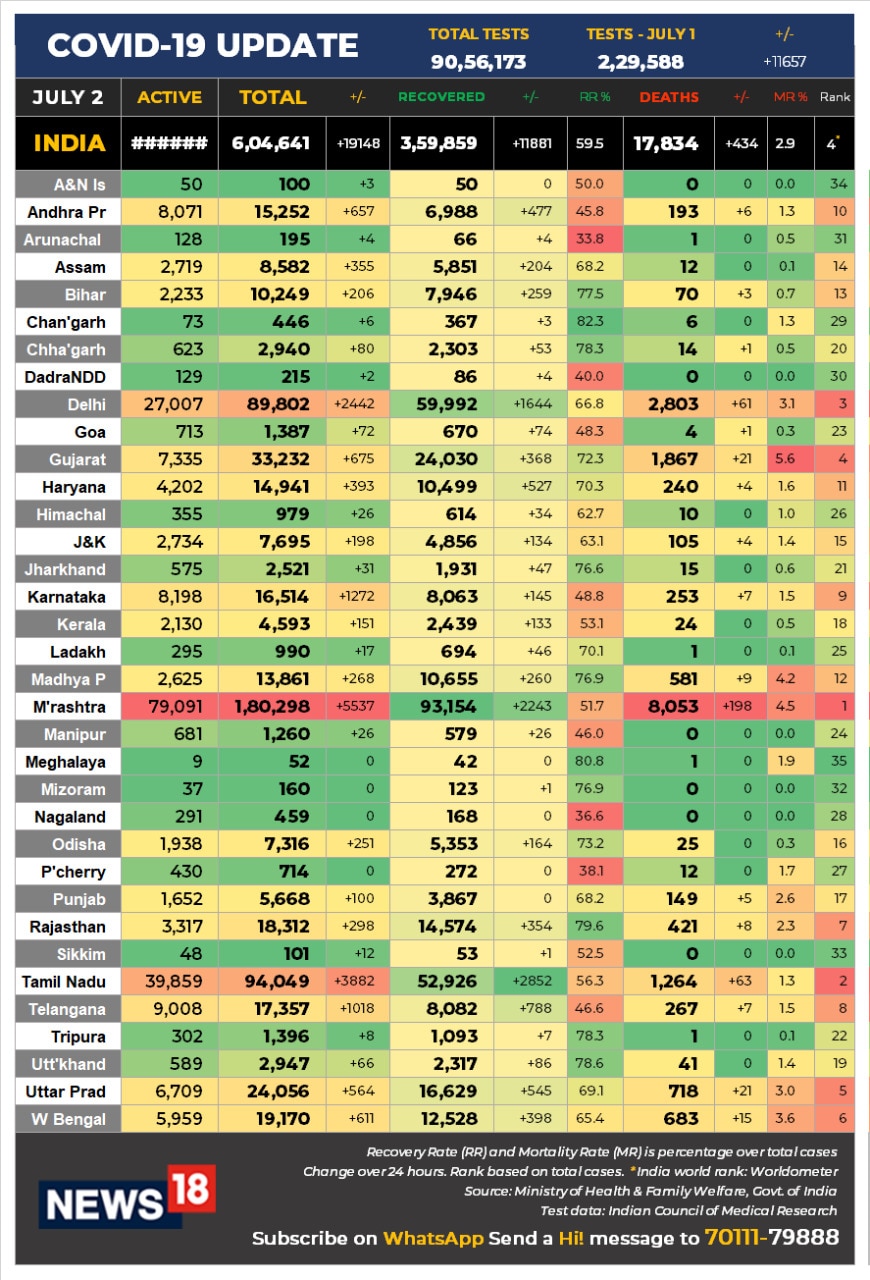 Jharkhand has registered 15 deaths, Chhattisgarh 14, Assam and Puducherry 12 each, Himachal Pradesh 10, Chandigarh six, Goa four and Meghalaya, Tripura, Ladakh and Arunachal Pradesh have reported one fatality each, according to the Health Ministry.

More than 70 per cent deaths took place due to comorbidities, it said.

Puducherry has recorded 714 COVID-19 cases, Nagaland 459, Chandigarh 446 and Dadra and Nagar Haveli and Daman and Diu together have reported 215 COVID-19 cases.

Arunachal Pradesh reported 195 cases, Mizoram has 160 cases, Sikkim has 101, Andaman and Nicobar Islands has registered 100 infections so far, while Meghalaya has recorded 52 cases.

State-wise distribution is subject to further verification and reconciliation, it added.
Tags