The South Zone of the country accounts for 37.19% of India’s total caseload. Andhra Pradesh leads the pack with 5,92,760 cases and is followed by Tamil Nadu with 5,19,860 infections.

India had recorded 51,22,846 Covid-19 cases by the afternoon of September 17, of which nearly 79% had recovered. A total of 6.1 crore had been tested and 83,257 deaths were reported. The Mortality Rate stood at 1.6% while the Test Positivity Rate at 8.5%. A zone-wise analysis of the country’s Covid-19 data throws up some interesting numbers.

We divide the country into five zones: 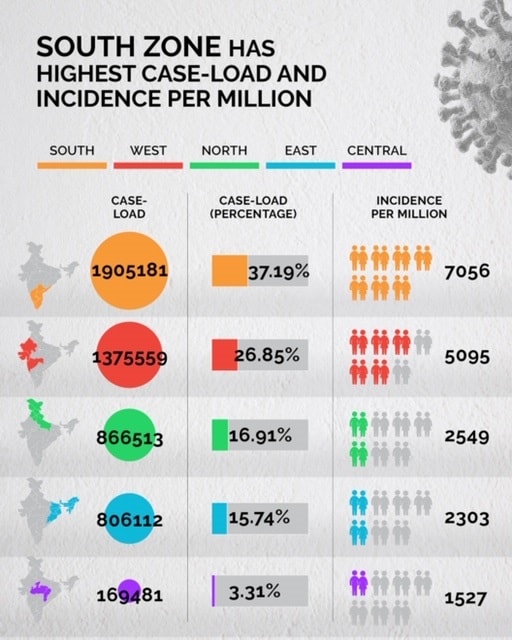 The North and East Zones have done comparatively well even with a massive population of 33.67 crore and 34.78 crore respectively. With a fourth of the population each, they have barely contributed to 17% and 16% of the total number of Covid-19 cases in the country. Meanwhile, the Central Zone comprising of the two states of Madhya Pradesh and Chhattisgarh has the lowest Incidence per million. Maharashtra accounts for more than four-fifth (82%) of the cases in the West Zone.

In terms of Recovery Rate, it is the Central Zone which has the lowest percentage of 63%. A little more than half of Chhattisgarh’s cases are still active. South and East Zones have the best Recovery Rate of 83%. Bihar (East Zone), at 91.2%, has the highest recovery percentage amongst all major states and is followed by Tamil Nadu (89.4%; South Zone) and West Bengal (86.7%; East). 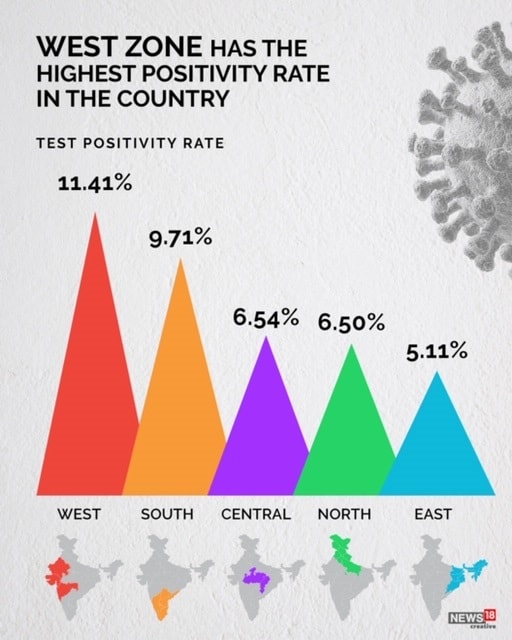 The southern Indian states have collectively carried out the maximum testing in proportion to their population. Overall, South Zone has tested 72,692 samples per 1 million population and is followed by North (45,619), East (45,090) and West (44,665) all stacked together. Madhya Pradesh (21,100) and Chhattisgarh (29,500) have amongst the lowest tests/million population ratio in the country. Thus, the Central Zone fares the worst on this count.

Maharashtra has the highest Positivity Rate in the country at 20.4%. This basically means that overall, one in every five persons tested in the state is Covid-19 positive. This is a highly alarming number and more than double the National Positivity Rate.

Thus, it is not surprising that the state pulls the entire West Zone’s Positivity Rate up to 11.41% – the maximum amongst all the five zones even though Rajasthan (3.9%) and Gujarat (3.3%) have amongst the lowest Positivity Rates in the country. Goa also has a high Positivity Rate of 11.4% which is approximately equal to the average of the zone.

South Zone also has a high Positivity Rate of 9.71% with Andhra Pradesh (12.3%) and Karnataka (12.2%) being the worst-affected on this parameter. The spread of the virus has been less prevalent in the North and East Zones. Mizoram (2.8%), Bihar and Arunachal Pradesh (3.1%) and Meghalaya (3.5%) are the least affected states in the East Zone while Uttar Pradesh (4.2%) keeps the overall Positivity Rate for North Zone low. 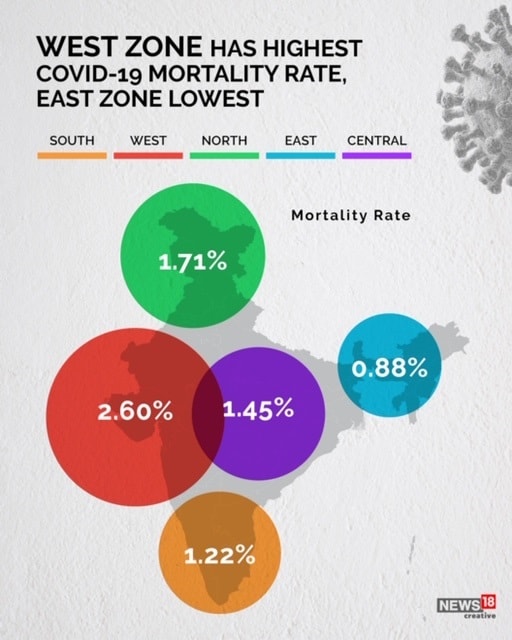 West Zone has recorded the highest number of Covid-19 deaths in the country and accounts for almost 43% of the total mortality percentage. Maharashtra has the highest toll (30,883) in India with 37% of the total deceased.

Next on the list are Tamil Nadu (8,559), Karnataka (7,536) and Andhra Pradesh (5,105) – the major contributors to South Zone’s mortality numbers. Overall, the South accounts for approximately 28% of the total Covid-19 deaths in the country.

East Zone has done a tremendous job in saving lives during the pandemic reporting just about 20 deaths per million population. Amongst major states, Bihar deserves a special mention with just seven fatalities per one million people.