The veteran lawyer said the bill to grant 10% quota to economically weaker among general category will be struck down by the courts because it will take the reservation ceiling to 60% and deserving candidates in the open category will be left out.

New Delhi: Indra Sawhney became a household name in 1992 after her challenge to Narasimha Rao’s forward quota move led the Supreme Court to impose a 50% cap on caste-based reservations.

History may now repeat itself with the senior advocate mulling a challenge to the Narendra Modi government’s pre-poll move to grant 10% reservation to ‘economically weaker’ sections in the general category. A Constitution Amendment Bill to the effect was passed by the Lok Sabha on Tuesday, and has been tabled in the Rajya Sabha on Wednesday.

Speaking to News18, Sawhney said the move will only result in “deserving candidates in general category losing out on opportunities.”

“This bill will be challenged in court. Let me think it over if I want to file a petition challenging this constitutional amendment. But this bill will take the ceiling to 60% and deserving candidates in the open category will be left out. Hence, the amendment will be struck down,” she said.

Recalling her landmark challenge to the Narasimha Rao government’s 1992 decision on reservation in government jobs for ‘poor’ sections in upper castes, Sawhney said her decision was prompted by a protest rally she witnessed in Delhi’s Jhandewala Extension. Indra Sawhney argued that the bill would reduce the share of deserving candidates to just 40%.

“A rally was going on. I saw young children, school and college students on the road. I filed the case within two days. But I never thought it would go on for so long,” she said, adding that the case went through a number of bench compositions before it was decided by the Justice Venkatachaliah-led bench.

“The media was vigorously reporting all the proceedings in the court and the arguments went on for a long time. The hearing began with a two-judge bench, then went through a three-judge bench, five-judge bench, seven-judge bench and then a nine-judge bench,” Sawhney told News18.

It was the nine-judge bench that decided the Indra Sawhney vs Union of India case, wherein it upheld that the Mandal Commission’s 27 percent quota for Backward classes, as well as the quota for Scheduled Castes, Scheduled Tribes and Backward Classes should not exceed the 50% mark.

The bench had also struck down the Narasimha Rao government’s notification reserving 10% government jobs for ‘economically backward classes’ among the Upper Castes.

One of the most important parts of the 1992 verdict was that ‘backward classes’ mentioned in Article 16(4) of the Constitution can be identified only on the basis of caste and not economic conditions. According to Sawhney, the Modi government’s move to amend Article 15 and 16 would be challenged as it was in 1992. 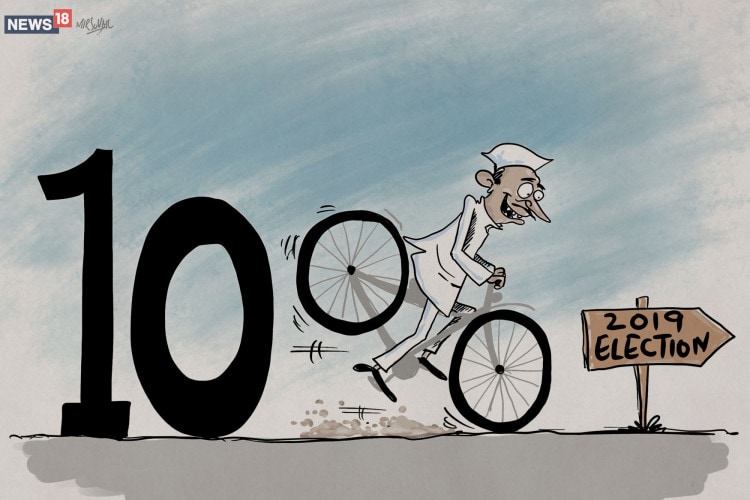 “The economic criterion laid down would cover majority of the population of India, thereby depriving substantial minority of their right to equality and recognition of the right to be selected on merits in open competition. Therefore, it will be against the basic structure of the Constitution,” she said.

The Indra Sawhney vs Union of India verdict was also referred to by opposition parties when the 124th Constitutional Amendment Bill was introduced in the Lok Sabha on Tuesday.

Sawhney agreed that the bill would reduce the share of deserving candidates to just 40%.

“This reservation for EWS in Upper Caste is not correct. Now, candidates who should qualify on merit, will have more difficulty in securing an opportunity because only 40% seats would remain after 10% quota is given to EWS. At present, it’s 50% seats for merit and 50% reservation,” the veteran lawyer said.

In Parliament, Union Minister of Social Justice Thawar Chand Gehlot has attempted to allay such concerns, saying previous attempts to grant similar quotas had failed as there was no constitutional provision to back it.

The Union Minister also said that he was “fully confident” that the bill would not attract the ire of the Supreme Court because a constitutional amendment was being brought in before bringing a bill on the reservation itself.

However, Sawhney said the 1992 verdict would still play a big role in shaping the future course. She added that she has never received any backlash for challenging the reservation.