Home » News » India » 'It Did Not Recurve': Why Did Cyclone Asani Deviate from Its Path And Storm The Andhra Coast?
4-MIN READ

'It Did Not Recurve': Why Did Cyclone Asani Deviate from Its Path And Storm The Andhra Coast?

The cyclone weakened, but contrary to IMD’s forecast, the system hit the Andhra Pradesh coast near Machilipatnam on Wednesday evening

It was all going well until the penultimate day. Severe cyclonic storm Asani intensified rapidly over the Bay of Bengal and advanced towards India’s east coast till Tuesday evening as predicted. The India Meteorological Department (IMD) was positive that the storm, in all likelihood, would recurve towards the sea when it reached near the north Andhra Pradesh coast, and eventually fizzle out.

But the plan went awry. The cyclone did not turn.

Instead, it slowly moved towards Andhra Pradesh on Wednesday evening and crossed the coast between Machilipatnam and Narsapur between 5.30 pm and 7.30 pm while weakening into a deep depression. Winds with speeds of 55-75 km per hour gusting up to 75 km per hour lashed the coastal districts, coupled with extremely heavy rains.

In its earlier forecast on May 9, IMD had indicated that the storm was unlikely to make landfall over the east coast, and recurve and move towards northwest Bay of Bengal off Odisha coast. On May 10, it revised its forecast, suggesting that the cyclone was likely to move along the Narsapur, Yanam, Kakinada, Tuni, and Visakhapatnam coasts and emerge into west-central Bay of Bengal off north Andhra Pradesh coasts by Wednesday night. But early on May 11, the day it made its landfall, the IMD issued a cyclone warning for Andhra Pradesh. The weather department also swiftly added a storm surge warning of 0.5 m, expecting inundation of low-lying areas of Krishna, East and West Godavari districts of Andhra Pradesh, and Yanam of Puducherry. But it maintained that evacuation would not be necessary. “It was 50:50,” said Dr M Mohapatra, director-general at IMD, New Delhi, while talking about the cyclone path. “A mid-latitude westerly trough was approaching, and the forecast models suggested that it would counter the cyclone in the sea and steer it north-northeastwards. But that did not happen because the height of the cyclone had decreased as it weakened into a deep depression near the coast. By the time, the cyclone had already moved a little ahead and crossed the coast. However, even then, it remained half over the land, and half over the sea.”

The mid-latitude trough is basically a low-pressure weather system that is an indicator of a shift in the wind, and meteorologists expected that it would push the cyclone towards the sea.

The IMD, however, exuded confidence that it was able to forecast the intensity right from the start, and that ensured the damage was minimised. “The re-curvature did not happen. But either way, we were certain that by the time it would reach near the coast, it would lose its intensity, and the damage would be minimised. There were timely warnings of inundation of low-lying areas, heavy rains, wind gusts, and tidal wave warnings for fishermen,” said the IMD chief. “What reached the coast were remnants of the cyclone which caused heavy rains. So, our intensity forecast was perfect.”

Stalled in the sea

Another challenge that Cyclone Asani threw at meteorologists was its tendency to stagnate for longer durations, as it moved closer to the coast. One of the factors was the relatively cooler sea waters near the coast that calmed the raging storm.

According to senior scientist Dr KJ Ramesh, former head at IMD, the cyclone not only intensified rapidly, but it also weakened relatively faster which was well-predicted by IMD. It grew from a low-pressure system into a Severe Cyclone within three days, as it advanced from the South Andaman Sea towards the west-central Bay of Bengal at a speed of about 25kmph. But just when it was reaching closer to the coast, it began to slow down and remained practically stationary for long hours. The speed dropped to 6km/hour just while it was barely 40 km southeast of Machilipatnam against the normal speed of 13 km/hour. This led to further cooling of the waters near the coast. There was also cold and dry incursion from the land, that weakened the storm further. Even after it made its landfall over the coast, it remained almost stagnant for several hours, while gradually becoming weaker.

“Ocean conditions have also been changing the shape and characteristics of the cyclones," said Ramesh. “Ultimately, it is a seesaw effect between the transient systems like a cyclone and the larger atmospheric circulation. The ocean heat content that powers these storms was low over the west-central Bay of Bengal, so it was certain that it would weaken. But it is the concurrent conditions of land and sea that decide which way a cyclone will eventually go. In either case, the storm was expected to weaken which it did, and not cause major damage. So, adequate warning was in place." 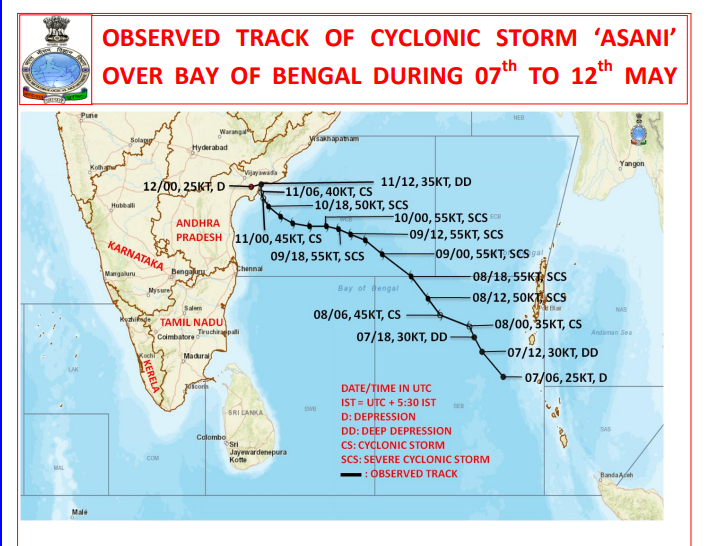 The latest updates show that the system slowly moved south-southwestwards and remained practically stationary over the same region in coastal Andhra Pradesh for over several hours, and continued to dissipate. By Thursday evening, it had already become a well-marked low-pressure area, bringing heavy rains over Rayalaseema, north coastal districts of Andhra Pradesh, and eastern parts of Karnataka.