The skewed sex ratio of 834 girls per 1,000 boys and the patriarchal system in Haryana have led to a practice where women are easily bought from poor states like West Bengal, Assam, Bihar, Odisha, and Jharkhand. And sometimes, from even across the border

Haryana: In the last 12 years, Shabnam has had four husbands. But she has never been married.

Shabnam was barely 13 years old when a ‘Didi’ visited her home in Assam’s Nagaon district. The ‘Didi’ convinced Shabnam to go to Haryana with her. “Is Haryana beautiful? What kind of food do they eat? Does it rain there?” a 13-year-old Shabnam had asked then. She was told that it’s a ‘magical’ place from where she could see the Taj Mahal, Red Fort, Qutub Minar and many other monuments.

Shabnam is now pregnant with her ninth child. She lives in her fourth husband’s house. “He won’t keep me for very long. As soon as I give birth to a boy, he will sell me off,” she said, nonchalantly.

In the world of Haryana, where the female population is dwindling, Shabnam is known as 'Paro'. She was bought from Assam for Rs 30,000 to ensure 40-year-old Rahim's 'dynasty' doesn't end. After she gave birth to a girl, Rahim decided he didn't want her. So he sold her off to another villager. Shabnam has been sold four times. She has never seen the Taj Mahal or any of the monuments. She has, in fact, never stepped out of Mewat.

The skewed sex ratio of 834 girls per 1,000 boys and the patriarchal system in Haryana have led to a practice where women are easily bought from poor states like West Bengal, Assam, Bihar, Odisha, and Jharkhand. And sometimes, from even across the border. 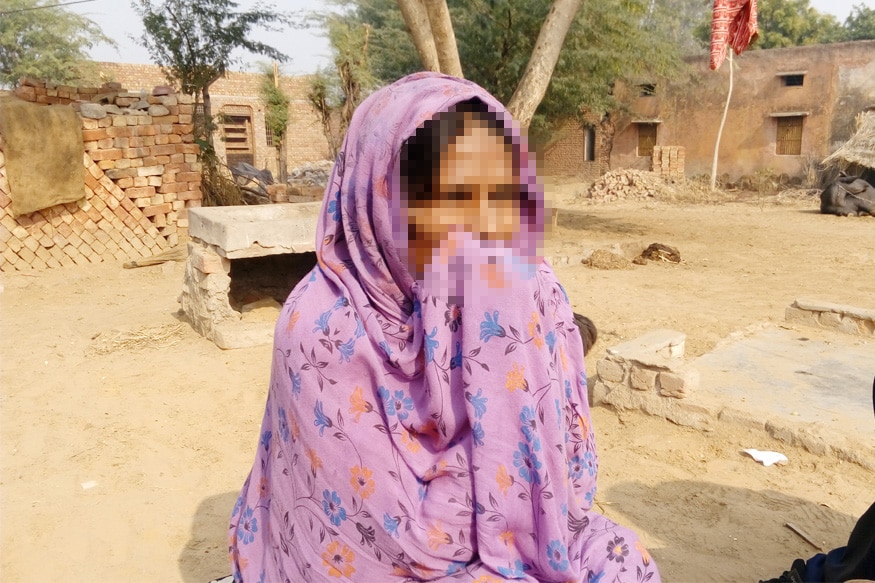 In trying to adopt to a completely different lifestyle in Haryana, Bihida has let her memories of home disappear.

A recent Reuters report that named India as world's most 'unsafe place for women' noted that the country that adds 'Maata' (Mother) as suffix to its name is also the place where the most number of women are exploited by human traffickers and forced to wed, work and turn into sex slaves.

While there is no official government data on the numbers, it's believed that hundreds of women are duped every year and forced to become 'Paros'. This has been happening for so many years that it has become a very common practice.

"You are looking for Paros? You will find them in all the houses in the next lane," a villager told me, pointing towards the lane that leads to Miththan village in Mewat district. The shocking part is that everyone here is aware that 'Paros' are bought from different parts of the country because of the lack of women in their state, that they are often shared among the brothers in a family, and that they are sold to other villagers. But no one bats an eyelid.

Khan, 59, who is originally from Hyderabad, doesn't call herself a 'Paro'. "My husband went to Hyderabad and married me," she said. However, after just moments of chatting, she revealed that her brother-in-law had tried to sell her several times. She managed to escape all of those attempts. "Women are not safe here. We have to be very strong to protect ourselves," Khan said as if almost talking to herself.

Years after she moved from Hyderabad and learned to speak Haryanvi, Khan is now the woman she had dreamt to be—strong. She is a member of the district legal authority and has become the sole rescuer of women who are trapped in forceful, violent marriages. "I feel like a police officer," Khan declared.

Khan travels across villages to help women in distress and provide them with legal assistance. Her house in Ferozepur Namak village often turns into a rescue shelter. "There have been times when about 20-25 women gathered here because their husbands were violent, or their family members tried selling or raping them," Khan said.

The 59-year-old activist may be the only light in all of Mewat district, but she has not been able to stop the practice. "I have tried, but I can't do this alone. Men who are old, alcoholic, violent, or widowed don't find wives in Haryana. So they go to other states to find wives," she said. 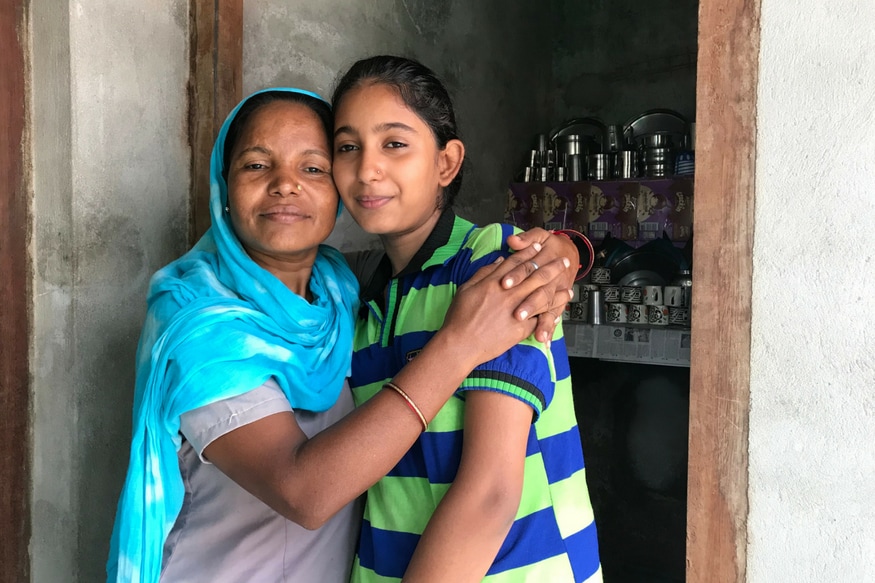 Reena was brought from Tripura as a teenager. This is a photograph of her with her daughter.

In 2016, according to the National Crime Records Bureau (NCRB) report, there were a total of 8,132 cases of human trafficking reported from across the country. There were 6,877 cases reported in 2015. Of the total 15,379 victims in these cases, 9,034 (58%) were below the age of 18 years. Meanwhile, West Bengal had topped the list, ranking only second to Assam, accounting for 44% of total cases in the country.

While the government is hoping to fight all aggravated forms of trafficking through its recently approved Anti-trafficking Bill that is soon to be debated in the Parliament, it will not quite help Shabnam and the hundreds of 'Paros' in Haryana who have been living here for decades. "After living there for years they don't know where their family is. They are not aware of the outside world and hence, they are scared of asking for help. They feel this is their life and continue with it," said Rishi Kant, the founder of Shakti Vahini, an organisation that has been trying to rescue and rehabilitate trafficked victims since 2001.

In Kiranj village of Mewat district, Bihida lives with her 11 children and her second husband. She hasn’t been home in the last 25 years. She doesn’t know if her parents are alive. She doesn’t even remember their names.

A 12-year-old Bihida had travelled to Kolkata from her home in Bangladesh’s Khulna district for her brother’s treatment. That was the last time she saw her parents. “I had seen the Howrah bridge," she said remembering the last memory she has of her family. Bihida's Haryanvi accent is so impeccable that there's no way to tell that she once just spoke the dhakaiya dialect of Bengali.

After years of living with an abusive husband, Bihida had tried to run away. The locals, then, got 19-year-old Bihida married to 32-year-old Muaz who had recently been widowed. "He got married to me, I signed a document," Bihida said, while her eyes glowed with a sense of pride for being 'married'. Bihida said she's happy with her husband and her children now. But when I asked her about her family, she held my hand and said, “Khub dekhte iccha kore. Amake niye jaba? (I really wish to see them. Will you take me?)”.

In trying to adopt a completely different lifestyle in Haryana, Bihida has let her memories of home disappear.

Later, Ghausia Khan told me that Bihida's younger sister, who was also brought to Haryana, had disappeared. "No one knows what happened to her," she said. For years, Bihida would cry calling out for her sister. She no longer remembers her sister. "Only if someone mentions her name, she remembers. She's happy here," said Khan. Happiness, for Bihida, just meant erasing the unhappy memories.

Though the practice of buying wives is common in the northern part of India, it's especially popular in Haryana. "Women mostly from Bengal and Assam are forced into marriages with men from Panipat, Sonipat and other Jaat areas," said Rishi Kant. The practice is not limited to any particular faith.

Kant said that after living for a few years most of the women give up hope and just accept life in what seemed like an alien place earlier. “A lot of times they manage to escape,” Kant said. The activist said that ‘Paros’ have no rights over properties or otherwise. “Their job is to just run a family and produce kids, that’s the only reason they are brought to Haryana,” he added.

He said that these trafficked brides are made to milk cows, learn a different language, wear a ghoonghat at all times and practically change their lifestyle for absolutely nothing in return—no love, respect, or rights. “They even force them to change their religion,” he said. Kant remembered a particular incident where a Muslim girl was given a Hindu name by the family who brought her to Haryana. “They wouldn’t even let her do namaaz. She finally ran away,” he said.

The reason, for bringing women from particularly Bengal and Assam, as Kant said, is because they usually have a lighter complexion. “They are willing to shell out up to Rs 1 lakh for fair brides. The valuation depends on the skin colour,” he said. 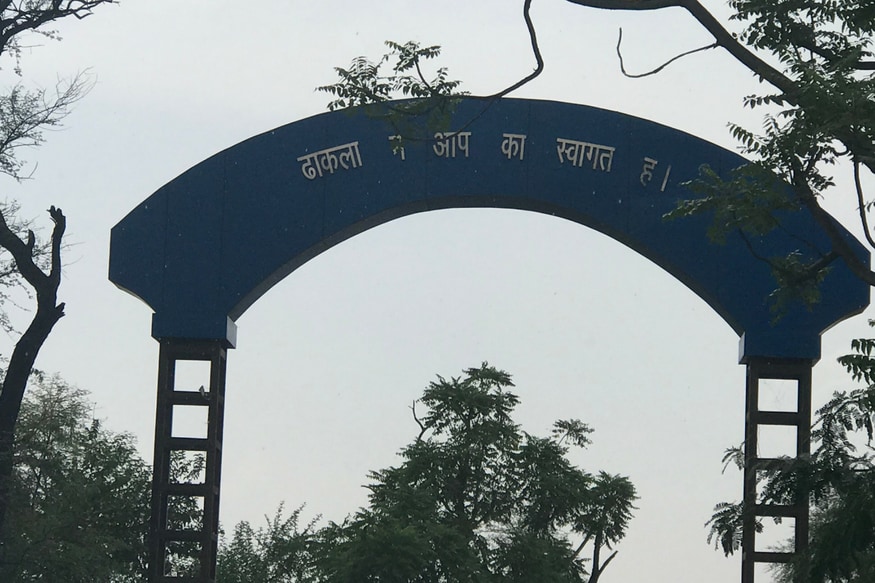 But, Dhakla village's khap panchayat leader Om Prakash Dhankar believes that getting brides from outside of Haryana is not surprising. In fact, he is of the opinion that there's nothing wrong with these women often being sold to brothers in the same family. "Even Draupadi had five husbands," he said, justifying the common practice. In the khap panchayat leader's village, he said, every third house has a 'Paro'.

Reena, who was brought from Tripura as a teenager, has no complains anymore. Thirteen years ago, she hated eating rotis, not being able to speak in her language, covering her face in a way where only her eyes would be visible, and being in a land nearly 3,000 kilometres away from her home. "The first couple of years were painful, I used to keep wondering where have I ended up in," she said. After her husband died, Reena's in-laws tried to get her married to her brother-in-law, but the attempts failed. "Yes, it's a common practice to get married to brothers here. But they couldn't force me," she said while caressing her daughter's hair. Reena's fondness for her daughter is unmissable.

She lives in a one-roomed pucca house with her twin children. The room has two cots, one stool and a visibly big photograph of her husband, hanging from the wall.

When I ask why she didn't go back to Tripura, she said it would have been 'shameful'. "No one treats women well. If I went back after becoming a widow, I would be shamed back at home and here," she said. "When my children were born, laddoos were distributed to celebrate my son. There was nothing for my daughter," she said with a faint smile, while her lips quivered perhaps in an attempt to stop herself from shedding a tear.

While Reena has kept her dreams tucked in a box to ensure they don't get in the way of her children, Shabnam, who lives about 100 kilometres away, has not forgotten about the promises she was made before being brought to Haryana. "Do you know where's the Taj Mahal?" Shabnam asked before I left her village. Perhaps, she still dreams of visiting it once.