When Modi meets Trump for their first one-on-one interaction in Washington on Monday, body language experts across the world will be watching closely.

When PM Modi meets Donald Trump for their first one-on-one interaction in Washington on Monday, body language experts across the world will be watching closely.

A firm handshake is a universal sign of strength and confidence. It is said that it began as a symbol of truce, to show your opponent that you are unarmed. But in the right hands, it can definitely be a weapon to send a message that you have the upper hand, both literally and figuratively.

US President Donald Trump definitely thinks so. He has transformed the simple diplomatic greeting into an armed race. All his handshakes follow a template – a sort of grab, squeeze and yank move done to assert his dominance. The handshakes resemble more a round of arm wrestling, and world leaders across the world have felt it.

Prime Minister Narendra Modi, too, is not far behind when it comes to power moves though. What he lacks in terms of a signature move, he makes up with sheer strength. UK’s Prince William can testify to that.

So when Modi meets Trump for their first one-on-one interaction in Washington on Monday, body language experts across the world will be watching closely. Maybe, Modi will completely turn the tables and pull out his classic hug, or he may go for a Namaste greeting.

If Trump’s last major interaction with a head of state is anything to go by, it is clear that Modi will come prepared. When Trump met French president Emmanuel Macron last month, Macron had wanted to establish himself as the alpha.

He gripped Trump’s hand so tightly, their knuckles turned white and the US President was forced to let go first. Macron had “won” the handshake battle. Trump’s series of such encounters have given rise to thousands of memes, tweets and detailed assessments.

It had all started with the 18-second handshake with Japanese PM Shinzo Abe, as he continuously pumped, shook and patted his hand. While Abe was left visibly disconcerted, Trump thought that he had shown he was in charge.

The next in line, Canada’s Justin Trudeau, was quick to learn. He came armed. He was quick to grab Trump’s arm in a pre-emptive move, neutralizing the yank move and fighting fire with fire in the ensuing squeezing duel.

On the other hand, Modi too has had his fair shake of awkward physical contacts. He is known for his vigorous hugs and handshakes. A notable example was his meeting with Prince William in Hyderabad. The PM’s iron grip had left a lasting imprint on the royal’s hand and a pained expression on his face. 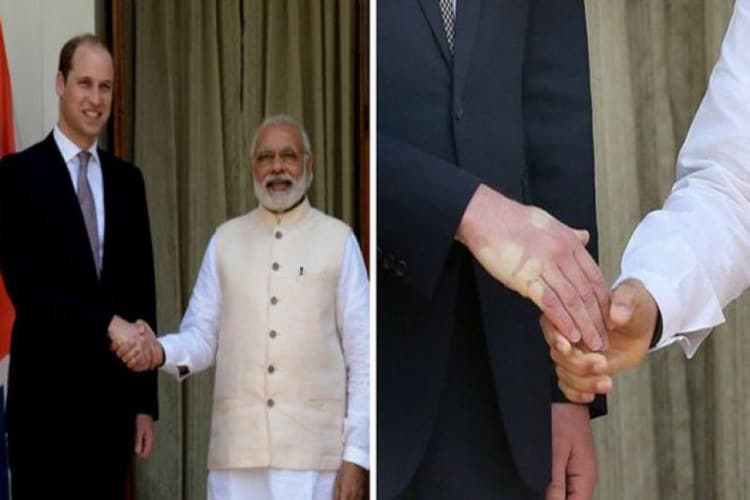 Social media users were quick to take notice and hilarity ensued. Another awkward encounter was with former French president Francois Hollande, as Modi was captured trying to move Hollande with his hands on his hips. Netizens wondered whether this was the way forward for two world leaders to meet.

After the Awkward Hug, Holande turned back to escape Modi but... pic.twitter.com/VyIcjbnTqa

More strained moments have come in Modi’s meetings with German Chancellor Angela Merkel. Twice now, in 2015 and this year, Merkel has apparently snubbed Modi’s offer of a handshake. But it was only her wanting to shake hands in front of the flags of the two nations.

So looking at the track record of the two leaders, the Modi-Trump meeting does promise at least some degree of awkwardness. Grab a popcorn and let the battle begin.