Umer Farooq (L) assembling the bomb with other accused. The photo is part of the NIA chargesheet.

The National Investigation Agency (NIA) has claimed that the 2019 Pulwama terror attack conspiracy was planned by Jaish-e-Mohammed (JeM) with an eye on the Financial Action Task Force (FATF) scrutiny. NIA officials have told CNN-News18 that money was transferred into Umer Farooq’s account in small packets to avoid scrutiny by international forums.

The FATF is an inter-governmental body established in 1989 to combat money laundering, terrorist financing, and other related threats to the integrity of the international financial system.

“Money was transferred in five different installments from Jaish handlers to Farooq’s accounts. The entire transaction didn’t happen at a go, like earlier,” said a senior officer supervising the NIA probe.

The NIA has attached to the chargesheet a copy of the pay in slip and Farooq’s cheque books of Allied Bank of Pakistan and Meenaz Bank of Pakistan where the money was received. A total of PKR 10.36 lakh was transferred in five installments between January 27 and February 4. The initial plan was to carry out the blast on February 6, but snowfall ensured it was postponed. In the chat, Farooq tells his handlers that Rs 1.85 lakh was spent to buy the Maruti Eco car used in the blast; Rs 50,000 to modify it for the purpose of bombing; Rs 2.5 lakh to buy explosives like aluminium powder, calcium nitrate, ammonium nitrate and gelatin sticks; Rs 30,000 on buying fertilisers used to extract nitrate compounds for the IED. 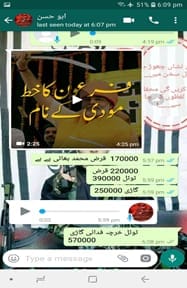 A screenshot of Farooq’s chat with Jaish handlers (News18)

The FATF has demanded that Pakistan show verifiable evidence to prove that proscribed terror organisations like the JeM have been stopped from using banking channels. Pakistan has been on the FATF grey list for its failure to do so.