An inspection team was formed after SBM (Rural) director, Dr Bramhadev Ram Tiwari, sent a letter to district magistrates on September 20 to highlight the number of toilet-less households in UP despite the state being declared ‘Open Defecation Free’ in October 2018.

New Delhi: A six-member team formed by the Centre’s Jal Shakti Ministry was sent to “test and assess” the status of the Swachh Bharat Mission in Uttar Pradesh after a survey found that there are still more than 14.62 lakh households without a toilet in the state.

According to a letter that News18 has exclusively accessed, the team did a field visit on October 18 and 19 to ascertain the number toilets constructed, and check the status of geo-tagging of toilets, the execution of ‘Left Out Beneficiaries’ (LOB) process, the construction of community toilets and the establishment of the Open Defecation Free Board in 26 districts of the state.

The inspection team was formed after SBM (Rural) director, Dr Bramhadev Ram Tiwari, sent a letter to district magistrates on September 20 to highlight the number of toilet-less households in UP despite the state being declared ‘Open Defecation Free’ in October 2018. 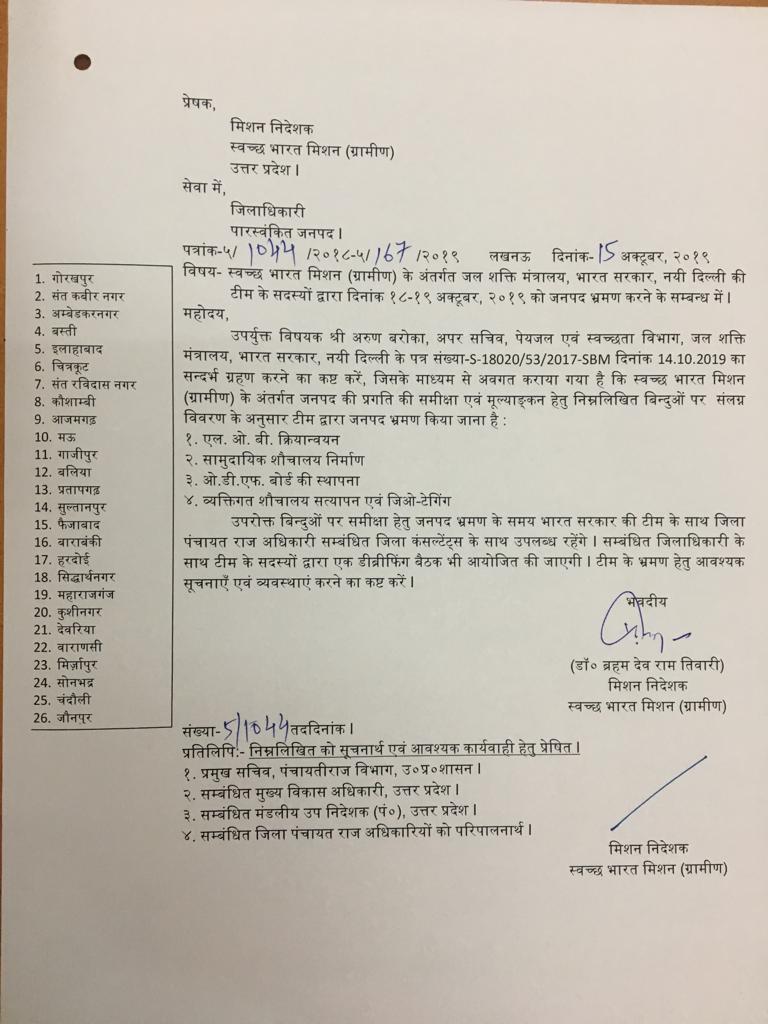 The 14.62 lakh figure surfaced after the Jal Shakti ministry’s Universal Sanitation Coverage (USG) survey was conducted in the state from August 15 to August 25.

“Following the Universal Sanitation Coverage survey, all 74 district magistrates – except of Pratapgarh – submitted their respective reports, and according to the given estimates 14,62, 152 households have been identified as not having a toilet in the state,” state SBM (Rural) Director had stated in his letter.

The letter asked the district magistrates to verify the figure of toilet-less households in their jurisdiction. They were later also asked to debrief the Centre’s six-member inspection team, comprising senior officials of the Jal Shakti ministry.

The discrepancy in figures, Tiwari explained to News18, was because the SBM mission target for construction of more toilets was based on a baseline survey conducted in 2012. But since then, the number of beneficiaries left out of the process increased.

A ‘Left Out of Baseline’ database was created after October 2, 2018, to cover households in excess of the baseline survey in which over 44 lakh households were identified. But over 14 lakh households have still been left out, Tiwari said.

He said the Universal Sanitation Coverage survey was conducted this August to counter verify the estimates of left out households. “The 44 lakh figure was the increase from the baseline survey. The 14 lakh figure surfaced in the counter-verification of that,” he told News18.

The emerging figures from India’s most populated state raise question marks over the extent of the success of the Centre’s flagship scheme, especially after earlier this month, the government declared India open defecation free.

Tiwari in his letter had clearly spelled out the numbers: “Earlier, after two phases of the Left Out of Baseline Survey (LOB) process, left out beneficiaries of the scheme totaling 44,32,689 were identified. Their data and description was uploaded on mission website. That 14.62 lakh households are still toilet-less, after the coverage of left out beneficiaries, is worrisome.”

However, state and central government functionaries emphatically denied toilet-less households were an issue.

Arun Baroka, additional secretary (water) at the Jal Shakti ministry, also echoed a similar response the same day. “We have checked with the UP government. The information that there are 14 lakh households without toilets is incorrect. State governments are fully committed to ensure that any household that may have been left behind gets access to sanitation on priority,” he told News18.

The SBM’s baseline survey, on the basis of which the scheme calculates sanitation coverage, was done by the erstwhile Ministry of Drinking Water and Sanitation in 2012 ahead of the Nirmal Bharat Abhiyan – a community-led sanitation programme that preceded the Swachh Bharat Mission.

In the letter in September, Tiwari had asked DMs to submit their verification of the counter-verified estimates in a report by September 25.

News18 had reached out to him September 26, to seek the final figure of toilet-less households in the state. At that time, he said: “It takes time to spread the message and get the work done. I am not in a position to say anything on the final figure yet.”

On September 24, the department of drinking water and sanitation’s dashboard, which reflects daily progress of SBM rural, turned the map of India green. On the basis of the same 2012 baseline survey, it claimed that 5,99,963 villages in the country are now Open Defecation Free.​