File photo of the shooter brandishing his gun during a protest against CAA outside the Jamia Millia Islamia in New Delhi on Jan 30, 2020. (REUTERS)

The injured student, Shadab, was hit by the bullet in his arm and has been taken to AIIMS. The attacker is in police custody.

New Delhi: A gun-wielding man opened fire on protesters demonstrating against the contentious Citizenship Amendment Act and National Register of Citizens near the Jamia Millia Islamia in south Delhi on Thursday, injuring a student.

The assailant has been identified as a resident of Uttar Pradesh's Gautam Buddha district and police are verifying whether he is a minor. He has been taken into custody and is being questioned, police said.

"Brandishing the gun, he shouted 'yeh lo azadi (take your freedom), come I'll shoot you' and then fired on the protesters," a student who was part of the protests told News18. Delhi Police personnel were present on the spot when the attack took place.

A video of the attack that is being shared widely on social media also showed the shooter shouting the 'Jai Shri Ram' slogan and warning protesters to chant 'Vande Mataram' if they want to stay in India.

The injured student, Shadab Farooq from Jammu and Kashmir's Doda district, was hit by the bullet in his left arm and was rushed to Holy Family hospital in Jamia Nagar. He was later shifted to AIIMS and is stated to be out of danger. 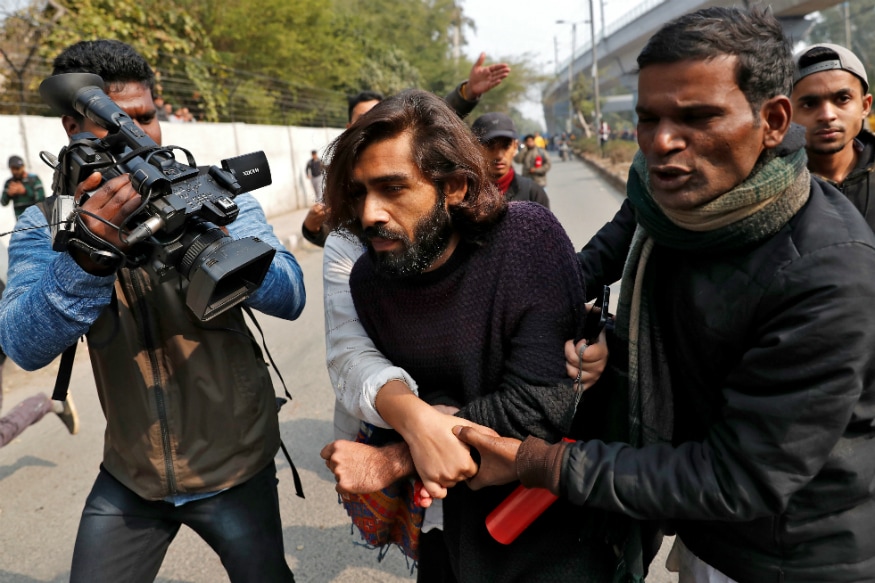 The wounded student is helped after a man opened fire during a protest against CAA outside the Jamia Millia Islamia in New Delhi. (REUTERS)

The incident took place when a protest march was being taken out from the university campus to Jantar Mantar in central Delhi. Students told News18 that the attacker tried to hijack the peaceful protest and threatened the anti-CAA agitators, while the cops stood as mute spectators.

After the shooting, the entry and exit gates of three Metro stations - Jama Masjid, ITO and Delhi Gate - have been closed by authorities fearing more protests.

The Facebook profile of the gunman, shared by police sources, showed the extent to which he had been radicalised. Just hours before the shooting, he had posted that his actions were revenge for Chandan, referring to the killing of Abhishek Gupta in clashes on Republic Day in UP's Kasganj in 2018.

Other posts on the social media account, in which Gopal had prefixed his name by 'Rambhakt', said 'game over, Shaheen Bagh' and "wrap me in saffron on my last journey". He had also posted several videos from the rally before the shooting.

The shooting comes in the aftermath of communally charged and violence provoking rhetoric by several BJP leaders in the run-up to the assembly elections in Delhi.

Junior finance minister Anurag Thakur had on Monday led chants of ‘shoot the traitors’ at a poll rally in north Delhi’s Rithala. The minister prompted "desh ke gaddaron ko..." to which the crowd responded "...goli maaro sa***n ko". The chant translates to "shoot down the traitors who betray the country".

Protesters against the CAA and the NRC have often been dubbed anti-national by members of the ruling BJP.

After Thakur’s hate speech, a man carrying a gun was also caught at Delhi's Shaheen Bagh, the venue of mega protests. The man had walked into the protest ground and allegedly brandished the weapon till he was overpowered by the surrounding protesters, eyewitnesses said.

After learning from the Delhi Police’s preliminary investigation that the shooter in today's incident outside Jamia University is a minor, Network18 has decided not to carry his photograph or name as per the law.

We will continue to report on the police investigation and keep our audience informed about the latest developments.

We thank you for your patronage.