Even RIMS, the only state-run super-specialty medical institute in Jharkhand, does not have the required equipment to deal with the crisis. At present, there is one ventilator for every 70,000 people in the state.

With inadequate healthcare infrastructure in place, Jharkhand is staring at an imminent crisis with a large number of returning migrant workers testing positive for coronavirus.

Even Rajendra Institute of Medical Sciences (RIMS), the only state-run super-specialty medical institute in Jharkhand, does not have the required equipment to deal with the pandemic.

The integrated COVID-19 centre at RIMS has 30 ICU beds of which 12 are without ventilators. Most of the district hospitals in the state do not have a single ventilator. At present, there is one ventilator for every 70,000 people in the state.

State head of the National Health Mission, Shailesh Chaurasia, said most of the cases being registered here are so far asymptomatic or have mild symptoms and hence, ventilators have been rarely required. He, however, added the government has placed an order of 25 ventilators.

Garhwa, which may soon be declared a COVID-19 hotspot and is only after Hindpiri (in Ranchi) as far the number of cases are concerned, has a dearth of equipment as well as doctors.

With 23 confirmed and 15 suspected cases of coronavirus among returning migrants so far, the district has only four ventilators and 50 beds reserved for COVID-19 patients. Recently, three-four doctors were brought from Ranchi and Daltonganj after a lone doctor treated all the patients for days.

Besides, there is power disruption issues. Dr Dinesh Prasad of Garhwa Sadar Hospital said only one ventilator can be run on the available generator. “We may not be able to provide ventilators to other patients even if the situation demands,” Dr Prasad said.

The state registered its highest single-day surge in COVID-19 cases so far on Friday with 22 people testing positive, taking the total number of infections to 153, officials said.

Of the fresh cases, 21 were that of migrant labourers -- 20 from Garhwa district and one from Koderma. All of them had recently returned from Surat in Gujarat on a private bus.

On Saturday, two COVID-19 cases were registered in the state from Dhanbad and both were that of migrants who came from Maharashtra a few days ago.

While the administration has issued a standard operating procedure (SOP) to contain the spread of the virus from returning migrants, the state’s healthcare infrastructure is raising alarm among officials.

Health Secretary Nitin Madan Kulkarni said the only thing that the government can do is to increase the number of testing and home quarantine all returnees.

“Migrants testing positive is not in our hands and coronavirus cases are increasing all over the country. All that we can do is increase testing and ensure their home quarantine,” Kulkarni said. 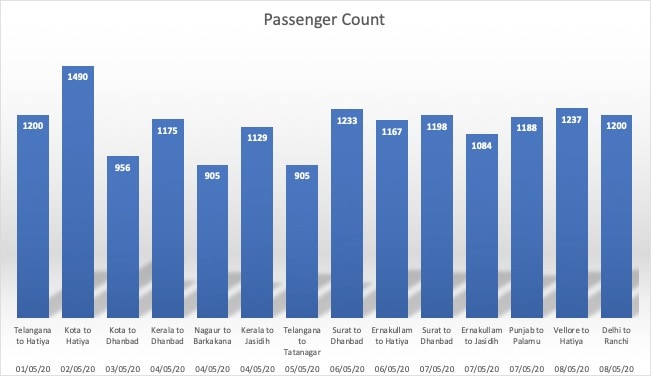 So far, 14,879 migrants have returned from different states to Jharkhand on 12 special trains, besides those coming back by buses and on foot.

Two days ago, five migrant workers who recently came back to their homes in Palamu from Chhattisgarh in an autorickshaw, tested positive for the virus.

While two of them had been quarantined for almost 30 days at two different locations on their way to Palamu from Maharashtra, three others had tested positive at Koriya in Chhattisgarh.

On their way to Palamu, the migrants were first stopped along the borders with Chhattisgarh. Sources said the migrants were dropped at Jharkhand border by officials of the neighbouring state as no administration now wants to the tally of cases to go up with patients of other states.

One of the workers said they were first quarantined at Rajnandgaon in Chhattisgarh. “After staying there for almost 15 days, they shifted us to Koriya district. There too we were quarantined for 14 days in an Adivasi hostel. During my stay there, I developed virus-like symptoms. I had fever and cold. They took my samples, but did not inform me that I had tested positive for COVID-19,” said the 28-year-old man.

There are several such reports of people being found positive for the virus after returning to the state. About 10 of the 1,175 labourers who came back from Kerala in a special train are suspected to have contracted the virus. Their test reports are awaited. Two men who returned to Dumka from Gurgaon have also been infected.

Meanwhile, a 33-year-old IT professional working in Maharashtra has reached out to the administration in Ranchi seeking help for his infection.

The man had gone for a test in Maharashtra. However, he and three of his friends were allowed to travel despite all of them showing symptoms of the virus and were only informed about the positive reports when they had already started the journey on a private vehicle.