In July, India recorded 1,241 Covid deaths and 5.67 lakh cases, as per the Union Ministry of Health and Family Welfare data

Even as India’s Covid-19 vaccination coverage has exceeded 205 crore doses, the graph of monthly cases and deaths is witnessing an upward trend, as July reported the highest deaths and cases in at least the past two months.

Further, the total cases reported in July were more than those reported collectively between March and June, official data analysed by CNN-News18 shows.

In July, India recorded 1,241 Covid deaths and 5.67 lakh cases, as per the Union Ministry of Health and Family Welfare data.

In May, India reported 827 deaths related to Covid that dropped to 486 in June.

The year started with the outbreak of the Omicron variant of the coronavirus in India. The deaths reported in the first two months – January and February – were more than 10,000. 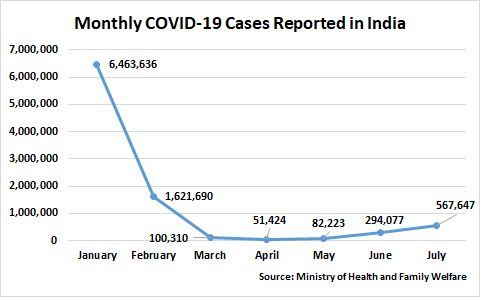 The monthly deaths started to drop in March, when nearly 7,300 deaths were recorded. In April, it further dropped to 2,674.

Similarly, the monthly cases in January were more than 64 lakh. In February, it came down to 16.21 lakh and in March it was little over one lakh.

The country reported less than one lakh cases in April and May. However, in June, the monthly cases went up to nearly three lakh. 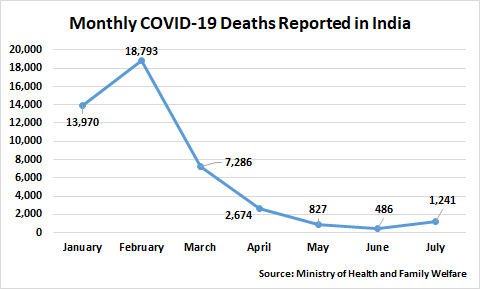 According to the ministry, India’s cumulative Covid vaccination coverage has exceeded 205.59 crore, including 10 crore precaution doses, under the nationwide vaccination drive.