The Dalits were mercilessly burnt alive by landlords in what was then unified Tanjore district for daring to demand better wages and social equality. The cops helped.

"It was dark, loud and extremely scary". A five-year-old boy staggered back home with his mother who had been stabbed. His father had 40 country bullets pumped into him before being rushed to the hospital. As many as 44 of the boy’s fellow villagers were burnt to death.

This is what Subramaniam Veenami Kumaran, now 55, remembers of the episode that erupted exactly 50 years ago, on the night of December 25, 1968.

On that Christmas night, an inconspicuous hamlet named Kilvenmani, now in the Nagapattinam district of Tamil Nadu, had to bear the brunt of the ugly side of caste and class exploitation. Forty-four Dalits — mostly women and children belonging to agricultural families — were charred to death by landlords.

Led by the CPI(M), the landless peasants in the then unified Tanjore district held demonstrations for increased wages in Kilvenmani, which led the landlords to bring labourers from other villages. This aggravated the clashes and a landlord’s agent was killed.

The carnage followed in retaliation.

"At around 10 pm, almost 100 goons of landlords came to the village in police vans, armed with arson and country guns used to kill birds," Kumaran told News18, adding that there were also a dozen policemen guarding the entry to the village.

Within minutes, they surrounded the hutments, cutting off all routes of escape. The Dalit labourers were shot at and two were fatally wounded. The villagers could only throw stones to protect themselves.

Finding no other place to flee, many of the women and children, and some old men, took refuge in one of the huts. The attackers then surrounded the hut and set it on fire, burning all those inside to death. The fire was systematically stoked with hay and dry wood.

Immediately after executing the massacre, attackers went to the local police station, demanding protection against reprisals. The cops obliged.

In the subsequent trial, the landlords were convicted of involvement in the event. Ten of them were sentenced to 10 years in jail in 1970. However, the Madras High Court acquitted the landlord in 1975, quashing the Nagapattinam district court judgment that had awarded him 10 years of imprisonment. 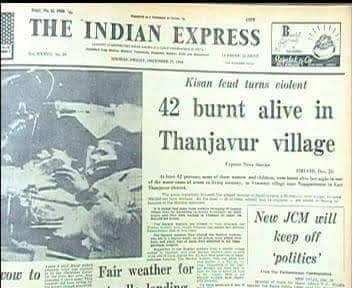 The main accused was murdered in a revenge attack in 1980. A case was filed against members of the Dalit community. The Madras High Court acquitted the agricultural labourers in 1994.

"I was one of the accused. I was only five when this happened. We had to visit the police station and court every now and then while the landlords were acquitted back in 1975. Nothing was done to give us justice. My father had 40 bullets in him and they could not take out six of them for the rest of his life. He could not walk," said Kumaran.

"We had to move out of the village. Our homes were taken away from us. Our family members were killed, but nothing happened to the landlords. It took the court almost 15 years to decide our case. Took the court only 7 years when it came to upper caste members," said a villager who moved out after the massacre.

The then AIADMK government, in order to rehabilitate the families, provided one acre of land to each in 1978, 10 years after massacre. However, this was not free. The state government loaned out the land for Rs 7,200 per acre. This stopped several families from owning land.

"It is only due to the continuous efforts of Krishnammal Jagannathan and her organisation called Land for Tillers’ Freedom (LAFTI) that more families are now owning land," said U Selvaraj, a resident of the village and one of the eye-witnesses of the incident.

“My husband and I travelled to Keezhvenmani the day after the incident. What I saw deeply disturbed me. I lived the life of Kilvenmani villagers,” said Krishnammal Jagannathan, who is now 92-years-old and lives in Chennai.

For three years after 1968, she stayed with the villagers.

In the days after the massacre, Krishnammal persuaded the landlord and negotiated 55 acres of land for the victims' kin.

Fifty years after what transpired, CPM workers have now constructed cemented hands at the spot where the massacre had occurred. This Christmas, the survivors and kin of victims of caste oppression have decided to try and leave the gory memories behind. The village is gearing up for grand celebration on the night of December 25, 2018. 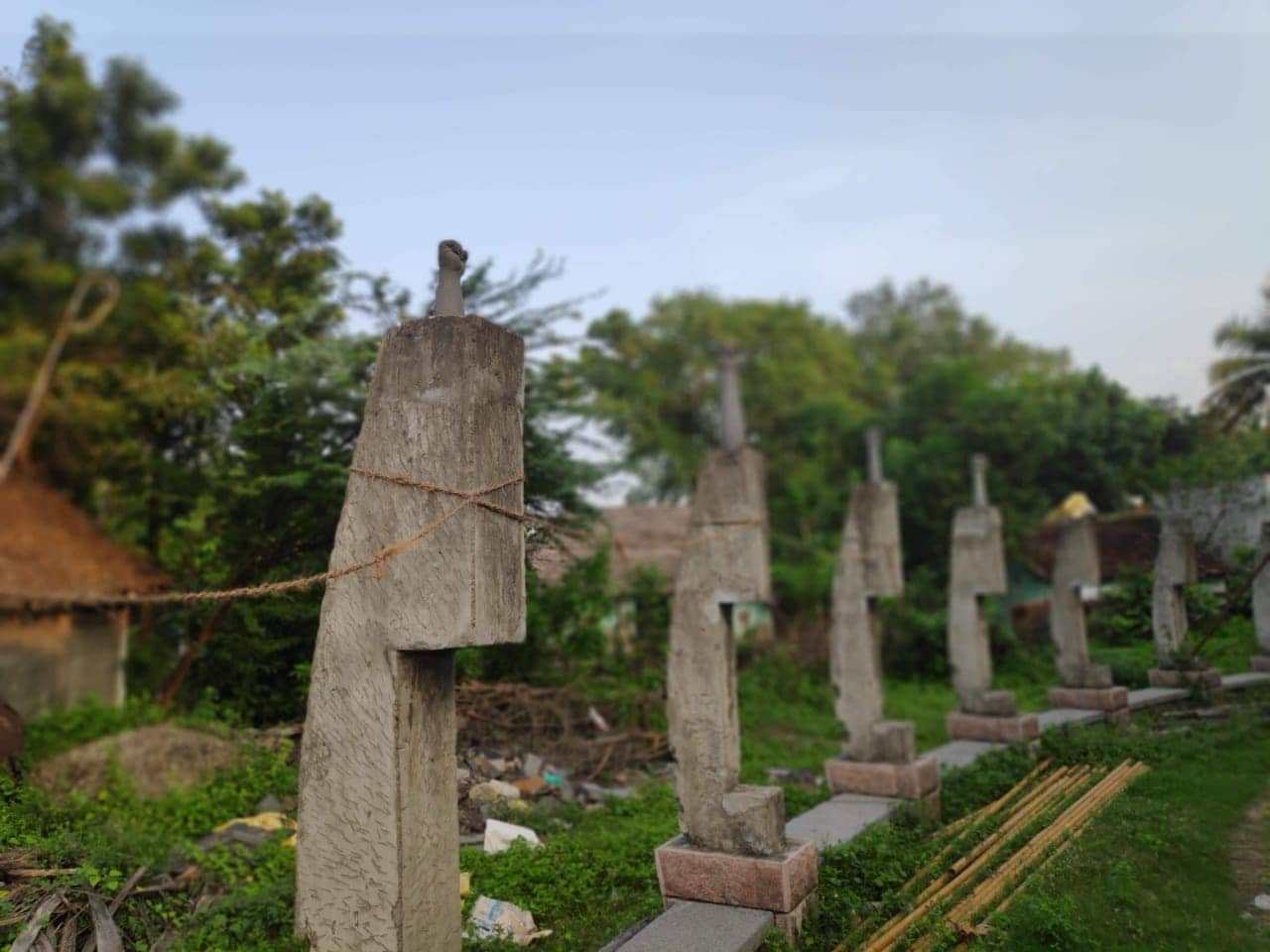 CPM workers have now constructed cemented hands at the spot where the massacre had occurred.

“We will celebrate the anniversary on a scale never seen before. For us, the victims are martyrs of Communism who fought capitalism, and not just victims of caste oppression,” said A Sivakumar, district president of DYFI, and a Venmani resident.

Meanwhile, 55-year-old Subramaniam Veenami Kumaran has been tasked with the responsibility of setting up the stage for the event.