Banners of Kamala Harris have been put up in her ancestral village in Tamil Nadu.

Chennai: “It’s our last day to get out the vote before the election. That’s why I’m in Bethlehem, PA for a drive-in rally with the voters and volunteers who are going to help win this battleground state,” tweeted Democratic vice-president candidate Kamala Harris on Monday, a few hours before the voting was to end in the US election.

But several thousand miles away in a small agriculture village in Tamil Nadu, people came together to pray for her victory. Though a majority of them may not have seen Harris, it did not matter as her family hails from the Thulasendrapuram village in Mannargudi Taluk of Tiruvarur district.

The temple with local deity Ayyanar (a form of Lord Shiva) came alive on Tuesday as villagers prayed for Harris’s victory. Due to Covid-19, voting in the US has been happening for the past few months across the world and is set to end on Tuesday.

Harris’s mother Shyamala Gopalan and her family belongs to Thulasendrapuram and the villagers, soon after learning that she is the Democratic vice-president candidate, started setting up flex boards with her pictures across the village, which is full of agriculture fields.

On Tuesday, the locals came together and placed a flex board outside the Ayyanar temple and performed a special pooja which includes abhishekam and decoration of the deity with flowers. Similar boards have been placed across the village. “The temple is the native temple of Harris’s family. It is a very small one and a few days back the villagers decided to do special pooja in the temple on Tuesday, the voting day,” said V Senthilkumaran, a native of the village.

He said the villagers were aware that majority of the voting in US has been done online but they still wanted to perform the pooja on Tuesday as it is the official election day in the US. “We all want Kamala to win the election and we hope to get the results this week,” said Senthilkumaran. 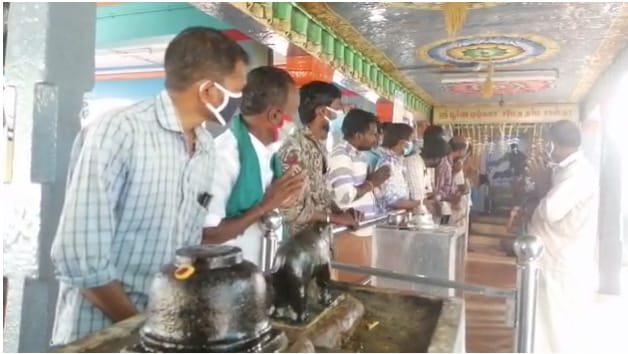 Meanwhile, in Chennai, where Harris’s relatives like her ‘chitti’ (mother’s younger sister) and her family live, it is business as usual. The word ‘chitti’ became famous after Kamala mentioned her in her speech after accepting to be the party’s candidate on August 18.

Her chitti, Dr Sarala Gopalan, and other relatives live in other parts of Chennai. Harris has recalled several times her visit to Chennai as well as walking on the Besant Nagar beach along with her grandfather P V Gopalan, a former civil servant.