The Karnataka government on Wednesday announced a farm loan waiver of Rs 8,167 crores.

New Delhi: Karnataka Chief Minister Siddaramaiah on Wednesday announced that the state will waive off farm loans up to Rs 50,000 which were taken from co-operative banks till June 20, costing the state exchequer Rs 8,165 crore.

Siddaramaiah made the surprise announcement in the Assembly, putting the Opposition on back foot, at least temporarily. The BJP, principal opposition party in the state, welcomed the move.

With this, Karnataka has become fourth state to announce partial farm loan waiver after Uttar Pradesh, Maharashtra and Punjab. 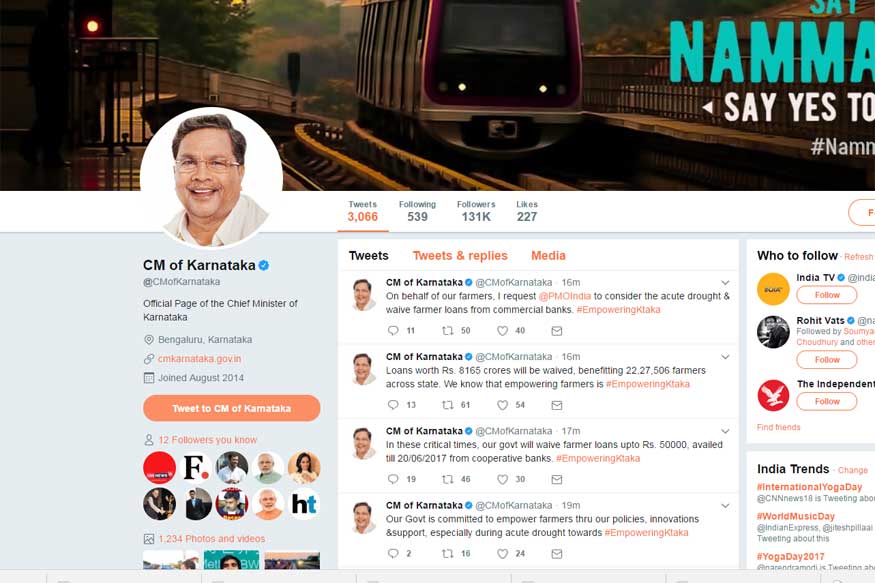 This waiver would benefit about 22 lakh farmers across Karnataka. Karnataka was under severe drought for the last three years and the burden of repayment of loans was becoming unbearable to the farmers.

The BJP claimed that it was because of their constant campaign that the state government was pressurised to go for farm loan waiver. BS Yeddyurappa was planning to sit on a fast for three days in July, seeking a farm loan waiver.

Kodihalli Chandrashekar, president of Raitha Sangha said, “We welcome the move, but the CM should have waived another Rs 3000 crore which are under nationalised banks.”

While speaking on the floor of the House, Siddaramaiah challenged the BJP to convince the Central government to waive off the remaining loans in the nationalised banks.

On Monday, Punjab Chief Minister Amarinder Singh announced a total waiver of up to Rs 2 lakh for small and marginal farmers (up to 5 acres) and a flat Rs 2 lakh relief for all other marginal farmers, irrespective of their loan amount.

Maharashtra Chief Minister Devendra Fadnavis had also announced a farm loan waiver on June 4. He said the waiver will come into force by October 31, 2017, and will be restricted to small and marginal farmers with land holdings of five acres. Around 40 lakh farmers are estimated to benefit from the step.

Earlier, the Yogi Adityanath-led government in Uttar Pradesh had also approved waiver of farm loans up to Rs 1 lakh, fulfilling a major election promise made by the BJP. According to state government, the decision will benefit 2.25 crore farmers and is likely to cost the state exchequer Rs 36,000 crore.

However, the Centre has ruled out any waiver of farm loan and said it will adhere to fiscal targets. On Tuesday, Finance Minister Arun Jaitley said the Centre is not considering any such plan.

The Centre, he said, will adhere to all fiscal targets including fiscal deficit. He said he would not comment on the loan waivers by states and had already made his position clear last week.

On June 12, Jaitley had said the Centre will not fund any of the loan waivers by states and they will have to find their own funds for doing so.