Karnataka bypoll results LIVE: The Congress-JD(S) alliance wrested a 4-1 victory over the BJP after winning the Ramanagara, Jamkhandi, Mandya and Bellary seats, as the BJP had to settle with a victory in Shimoga. Reacting to the win, chief minister HD Kumaraswamy said he was confident of a better result in the 2019 Lok Sabha polls. "There are 28 LS seats, we'll work with Congress to win all of them, that is our goal. This election was the first step. This is not an empty boast just because we have won today. This is the confidence of people in us. This win is not making us arrogant," he said.

HD Deve Gowda thanked the people of Karnataka for "supporting the development-centric administration of JDS-INC government". He added that people had given a response to "those who were trying to destabilise the state government".

The Reddy brothers were ignored till the recent Assembly elections. They staged a comeback closer to elections and managed to win a few seats. They had also played a major role in “buying” Congress-JDS MLAs during Yeddyurappa’s 56-hour rule. After Tuesday’s defeat, the Reddys and Sriramulu will find it difficult to retain their primacy in the politics of Bellary that they used to control like medieval age rulers.

The Congress troika of Siddaramaiah, Dinesh Gundurao and DK Shivakumar came out with a plan to beat the BJP in Reddys fiefdom. They deployed over 80 small and big leaders across the mineral rich district to reach out to voters. They also ironed out the differences among Congress MLAs from the Bellary. The BJP campaign was led by B Sriramulu and Reddy brothers. Even though other BJP leaders including B S Yeddyurappa also campaigned for the party, it was finally a Reddy brothers centric election.

The winning margin of the Congress seems to have shocked the saffron party which is gearing up for the general elections due early next year.  When the Election Commission of India (ECI) declared bypolls to three Lok Sabha seats — Shimoga, Bellary and Mandya — the Congress did not even have a strong candidate in Bellary. After a lot of deliberations, they finally fielded an “outsider” and MLC VS Ugrappa from there even ruffling some feathers.

In Bellary, V S Ugrappa romped home by over two lakh votes and in Jhamkhandi, Anand Nyamagouda registered an impressive win by a margin of over 39,000 votes. These two seats are in the BJP stronghold of north Karnataka and its core voters Lingayats are in a large number in both the seats.

The 4-1 win for the ruling Congress–JD(S) combine in Karnataka is expected to change the political arithmetic in the 2019 Lok Sabha elections. The “hand” and “woman with haystack” together have handed a humiliating defeat to the BJP in two Lok Sabha and two Assembly seats. The BJP managed to retain Shimoga Lok Sabha seat by a small margin, thus saving its face. 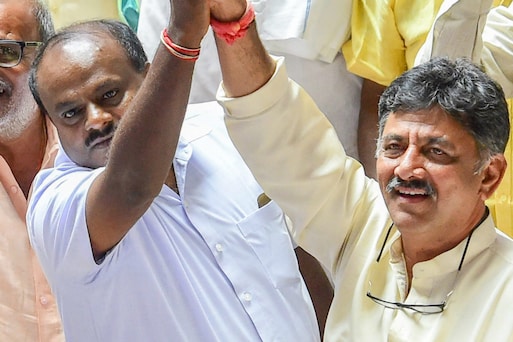 Till the last moment the BJP was hoping for a win in at least one of the two seats.

There are 28 LS seats, we'll work with Congress to win all of them, that is our goal, Karnataka chief minister HD Kumaraswamy said adding that this election was the first step."This is not an empty boast just because we have won today. This is the confidence of people in us. This win is not making us arrogant,"Kumaraswamy said.

At the end of the counting, Congress-JDS combine has taken a lead in Ramanagra, Mandya, Jankhandi and Bellary. The BJP has managed to bag only the Shimoga constituency in the Karnataka bypolls. 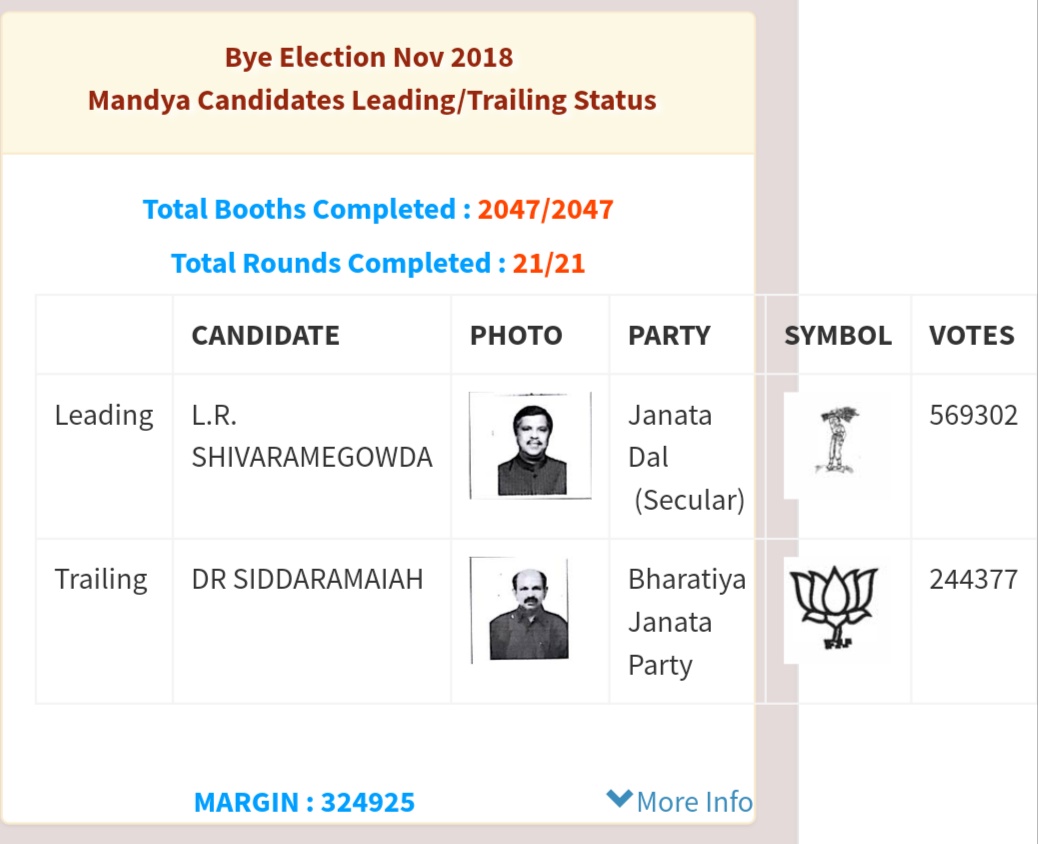 Former Karnataka chief minister Siddaramaiah made a scathing attack on the BJP after the JDS-Congress combine emerged victorious in the Karnataka bypolls today.

When @narendramodi does not answer questions of the ppl. Ppl will answer during elections.

When @BJP4Karnataka forgets the mandate given by the people & get consumed by their arrogance. Ppl will make them bite the dust. This time it was Ballari mining dust #KarnatakaRejectsBJP

The results of Karnataka by-elections is the reflection of unity of the JDS-INC front. I am grateful to the leaders and party workers of both parties for their enormous contribution.@hd_kumaraswamy @siddaramaiah @DrParameshwara @dineshgrao @DKShivakumar

Negative forces have been defeated in Karnataka, said senior Congress leader Manish Tewari after the results were announced in the Karnataka bypolls today. he also congratulated the Congress workers and the Congress-JDS alliance. "This is an indication that the mood of the nation has changed. Out of 10 ten bypolls that have taken place, Congress and like minded parties have performed exceedingly well," Tewari said. The winning margin of the Congress seems to have shocked the saffron party which is gearing up for the general elections due early next year.

People have rejected BJP, senior Congress leader Dinesh Gundu Rao said after Congress-JDS emerged victorious in the Karnataka bypoll. He called the results a  rejection of the Modi government.  "Bypoll results will send a message to the entire country that the time for change has come," the ANI quoted him as saying.

JD(S) LR Shivaramegowda leads over BJP's Dr Siddaramaiah by 196883 votes in Mandya Lok Sabha seat after counting of votes in Round 10, the ANI reported.

As Congress is sweeping most constituencies in Karnataka bypolls, the supporters started celebrating outside counting station in Bellary.

Karnataka: Congress workers celebrate outside the counting station in Bellary. Congress' candidate VS Ugrappa is leading by 184203 votes in the parliamentary seat. #KarnatakaByElection2018 pic.twitter.com/4y6l9ZqY8j

Karnataka: JD(S) workers celebrate in Ramanagaram. JDS' Anitha Kumaraswamy is leading by 1,00,246 votes in the assembly seat. Congress-JD(S) alliance is leading on 4 out of 5 seats in #KarnatakaByElection2018 pic.twitter.com/4s1RAZ6vfU

At halfway mark of counting in Bellary Lok Sabha constituency (9 out of 18 rounds), V S Ugrappa of the Congress secured3.34 lakh votes with J Shanta of the BJP trailing much behind at 1.94 lakh votes. Meanwhile, Congress leader P Chidambaram made a cricket analogy for the bypoll results in Karnataka .

4-1 result (unsure about Shimoga LS) in Karnataka looks like a Test series win under Virat Kohli. Coalition has delivered.

Congress leader DK Shivkumar has said the victory has brought more responsibility to the party and dedicated his win to the party president, Rahul Gandhi.

Resounding win for the @INCIndia & @JanataDal_S coalition in Karnataka. 4-1 thrashing to BJP.
People have rejected the negative politics of BJP in Karnataka and the abject failure of Modi govt in addressing people’s issues.
Congrats to all the winners.

I thank people of Karnataka for supporting development-centric administration of JDS-INC Government.
People of the state have given their response to those who were trying to destabilise the state Government.#ThankYouKarnataka 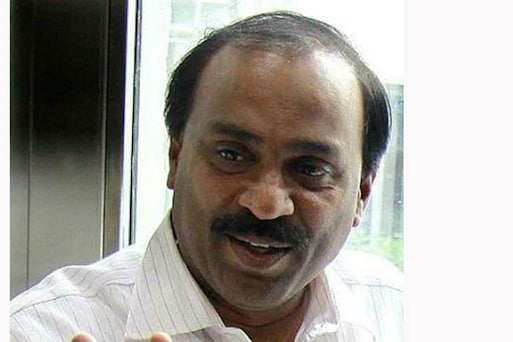 Siddaramaiah thanks people of Ballary.  He says the result is curse of Ballary people for Janardhan Reddy's inhuman talks and deeds, referring to his remark on  Siddaramaiah's son's death. He also said that the people of Bellary have moved from dark to light on this auspicious day of Naraka Chaturdashi (Diwali)

INC's AS Nyamagouda leads by 32933 votes in Jamkhandi. JDS's Anitha Kumaraswamy leads by 65990 votes in Ramanagaram,BJP's BY Raghavendra leads by 32563 votes in Shimoga, INC's VS Ugrappa leads by 151060 votes in Bellary&JDS LR Shivaramegowda leads by 76952 votes in Mandya, the ANI reported. The Karnataka bypoll, which saw a close contest between the Congress-JD(S) combine and the BJP, was held on Saturday and saw a 67% turnout.

The Karnataka bypolls, which saw an estimated 67% voter turnout, were held for three Lok Sabha and two Vidhan Sabha seats.


The by-election for three Lok Sabha and two Vidhan Sabha seats was held on Saturday. Bypolls in Bellary, Shimoga and Mandya Lok Sabha seats, and Ramanagara and Jamkhandi Assembly seats were necessitated by the resignation of three MPs and one MLA, and the death of another MLA.

The polls, which saw an estimated 67% voter turnout, are largely being viewed as a litmus test for the Congress-Janata Dal (Secular) coalition.

In all the five constituencies, the alliance partners have fielded joint candidates. While the Congress has fielded its contestants in Bellary and Jamakhandi seats, the JDS has chosen Shimoga, Mandya and Ramanagara.

Among all five constituencies, Shimoga and Bellary are considered to be crucial seats for the Congress, JD(S) and the BJP.

According to political pundits, a win for the JD(S) in Mandya, Ramanagara and Shimoga would be a temporary setback for the BJP and would harm the Congress in the long-run as party workers may switch sides to the saffron party to take on the JD(S).