We will keep track of major news events in India and across the world through this live blog. Stay tuned as Sumedha Kirti brings you latest updates:

Big news right now: Bharatiya Janata Party (BJP) MLAs have staged a walkout from Karnataka Assembly in the middle of Chief Minister HD Kumaraswamy’s speech during the vote of confidence. The floor test is being overseen by Speaker KR Ramesh Kumar, who was unanimously elected after the BJP withdrew the nomination of Suresh Kumar. HD Kumaraswamy, who was sworn in at a grand assembly of opposition leaders on Wednesday, is in a comfortable position given the strength of the JD(S)-Congress-BSP coalition. While the Congress has 78 MLAs, Kumaraswamy's JD(S) has 36, and the BSP has one. The alliance has also claimed support of the lone KPJP MLA and an Independent. The floor test comes almost a week after BJP leader BS Yeddyurappa ended his five-day run as CM without going through the motions of a trust vote. Early cracks have started appearing in the coalition with Deputy CM G Parameshwara’s remark that the coalition had not discussed full tenure to the JD(S) leader. Reacting to the statement, Congress leader Ramalinga Reddy said the decision on a “5-year or 2-year tenure” for HD Kumaraswamy will be decided by the party high command.
4:50 pm (IST)

They cannot waste public money, if a law and order problem is created it'll be because of them. They cannot force and blackmail us. We are a responsible government and cannot act according to the wishes of BJP, Says Congress' DK Shivakumar on the state-wide bandh that the BJP has called on May 28 if CM HD Kumaraswamy doesn't waive off farmer loans.

HD Kumaraswamy's Vote of Confidence has been approved unanimously by voice vote after BJP MLAs walked out of the Assembly during CM's speech.

'Gowdas Betrayed Us, They Can Do Same With You' | BS Yeddyurappa alleged that there are several charges of corruption against the Gowda family, and warned the Congress that JD(S) have betrayed BJP in the past and can do the same with them. Following this fiery speech, BJP staged a walkout from Karnataka Assembly.

BJP Walks Out of Karnataka Assembly | BJP walks out of the Karnataka Assembly as floor test is underway and chief minister HD Kumaraswamy is speaking in Vidhana Soudha. Despite the number of the house going down by 104, the JD(S) and Congress will be able to prove majority as their combined votes meet the majority mark.

Yeddyurappa Recognised As Opposition Leader in Karnataka Assembly | BJP legislature party leader B S Yeddyurappa was today recognised as the leader of the opposition in Karnataka Assembly. Newly-elected Speaker K R Ramesh Kumar made the announcement shortly after his election as the presiding officer of the House. Govind Karjol would be the deputy opposition leader, Kumar said.

HD Kumaraswamy Faces Floor Test | Chief Minister HD Kumaraswamy today sought vote of confidence in the Karnataka Assembly for the three-day old Congress-JD(S) coalition government headed by him. Kumaraswamy moved the one-line motion soon after the unanimous election of Ramesh Kumar as the speaker of the assembly. With the numbers game in favour of the coalition, the 58-year old, who took oath as chief minister on Wednesday, looks set to win the trial of strength. The Congress has 78 MLAs, Kumaraswamy's JD(S) 36, and BSP 1. The alliance has also claimed support of the lone KPJP MLA and an independent. Kumaraswamy had won two seats. BJP strongman B S Yeddyurappa had stepped down on May 19, two days after he assumed office as the chief minister, without going through the motions of a floor test.

Yeddyurappa Warns of Stir If Farm Loans Not Waived in 24 Hours | Striking an aggressive note, Karnataka BJP chief B S Yeddyurappa today warned of a state wide stir if the Congress-JD(S) coalition government led by H D Kumaraswamy did not waive farm loans within 24 hours. Speaking to reporters before Kumaraswamy took the floor test to prove his majority in the assembly, Yeddyurappa said the JD(S) leader had promised to waive farm loans worth Rs 53,000 crore, including those borrowed from nationalised banks. "It was you who had promised waiving farm loans within 24 hours (after assuming office). The farmers will not be ready to buy your stories that you head a coalition government and it has its own compulsions. You have to announce it in this special session itself. Else, we will prepare an action plan to launch our agitation across the state," he said. Yeddyurappa said he would not comment on the Congress as it is already out to "finish" the JD(S). However, he said, the BJP's struggle was mainly against the "anti-farmer, anti-people and corrupt government of Kumaraswamy." To support his claim that the Kumaraswamy government would be corrupt, he quoted JD(S) supremo H D Deve Gowda's grandson Prajwal's recent reported remark that no work happens without "suitcase" in the party.

#Karnataka Chief Minister HD Kumaraswamy has moved the moved the motion of confidence in the state assembly. pic.twitter.com/IMRTXwCR7q

BJP Likely to Walk Out After Trust Vote is Moved | As we await for the Karnataka floor test, sources say that BJP is likely to walk out after the trust vote is moved. The JDS-Congress combine has 118 MLAs (JDS 37, Congress 78 and three others) in the 222-member House, while the BJP has 104 seats following the Karnataka elections.

Chief Minister Kumaraswamy and BJP leader B S Yeddyurappa escorted Ramesh Kumar to the chair. The move by the BJP, which is the single largest party with 104 MLAs, apparently came because it failed to muster support of additional lawmakers required for the victory of its candidate. The Congress-JD(S) combine has claimed support of 117 members. The Congress has 78 MLAs, Kumaraswamy's JD(S) 36, and BSP 1. The alliance has also claimed support of the lone KPJP MLA and an independent. Kumaraswamy had won from two seats.

Suresh Kumar, a 5th term MLA from the city, had filed his papers yesterday, in an apparent indication by the BJP that it wanted to give the JD(S)-Congress coalition a run for its money in the race for speakership before Chief Minister HD Kumaraswamy faced the floor test. As the House met and pro-tem speaker K G Bopaiah took up the matter, BJP's Sunil Kumar stood up and said he was not moving the motion proposing Suresh Kumar for the Speaker's post. Suresh Kumar then said, "I accept it." Ramesh Kumar's name was then proposed by former chief minister and Congress Legislature Party leader Siddaramaiah and seconded by Deputy Chief Minister G Parameshwara. The motion was unanimously adopted by the House.

Ramesh Kumar Elected As Karnataka Speaker | Congress' K R Ramesh Kumar was today unanimously elected the Speaker of the Karnataka Assembly, after BJP candidate S Suresh Kumar pulled out of the race, in a major victory for the JD(S)-Congress coalition before Chief Minister H D Kumaraswamy faced the floor test. Shortly before the start of the proceedings, Suresh Kumar said he was withdrawing his nomination following a direction from the BJP leadership. "On the directions of our party, I had filed the nomination for the post of Speaker of Karnataka Legislative Assembly. Now, after discussion in the party, it is felt that the Speaker has to be elected unanimously following the parliamentary traditions. I'm withdrawing my nomination," Suresh Kumar tweeted.

Siddaramaiah Congratulates Ramesh Kumar | On Ramesh Kumar's election as speaker, former chief minister Siddaramaiah says, "As the legislature party head of the Congress and all the legislators, let me congratulate you. In a democratic set up, the role of a speaker is a very important one. If democracy has to succeed, legislative assmebly, council and parliament has to work effectively. I have over 40 years of experience, and have been a part of disussions in all these years. It's only when quality discussuions are held in the house, that the democracy is upheld."

G Parameshwara Says New Speaker Ramesh Kumar is an Inspiration for All | Karnataka Deputy Chief Minister G Parameshwara says, "You are a role model and inspiration to all of us. Your experience as a earlier speakers and the way you enured the decorum in the house is also a model for all of us. On behalf of all the legislators, I congratulate you on becoming the speaker. I express my gratitude to to the house."

BS Yeddyurappa Hopes Opposition Will Get to Keep Their View in House More Often | Opposition leader B S Yeddyurappa says, "The people of the entire state have watched as you conducted the proceedings of the house in five years without any bias. We discussed in our legislatture meeting that we should ensure unanimous election of the speaker. I hope you will be giving more opportunities to the opposition members to present their view in the house. You have been fair in your previous stint also, and opposition members will cooperate with you."

HD Kumarswamy's First Speech in Karnataka Assembly After Becoming CM | "I want to express my gratitude to all the leaders of the house to have made it a unanimous decision. It is rather rare that all members of the Assembly elect a speaker together. You (Ramesh) had conducted the proceedings of the house in 1994 and 1999. The way you conducted the house is already in history, and I am hopeful that you will continue giving your best and upholding the post," says Kumarawamy.

Election for Karnataka Speaker to be Held Today | The election for Karnataka Assembly speaker will also be held today. While Congress-JD(S) coalition, which claims to enjoy the support of 117 MLAs, has plumped for Congress's Ramesh Kumar, a former Speaker, as its candidate for the post, BJP fielded senior leader S Suresh Kumar as its candidate. Kumar, a fifth term MLA from the city, filed his nomination papers before Assembly Secretary S Murthy at Vidhana Soudha, the seat of the state legislature.

Before arriving at Karnataka Assembly, HD Kumaraswamy held a meeting with JD(S) members at his residence in Bengaluru. 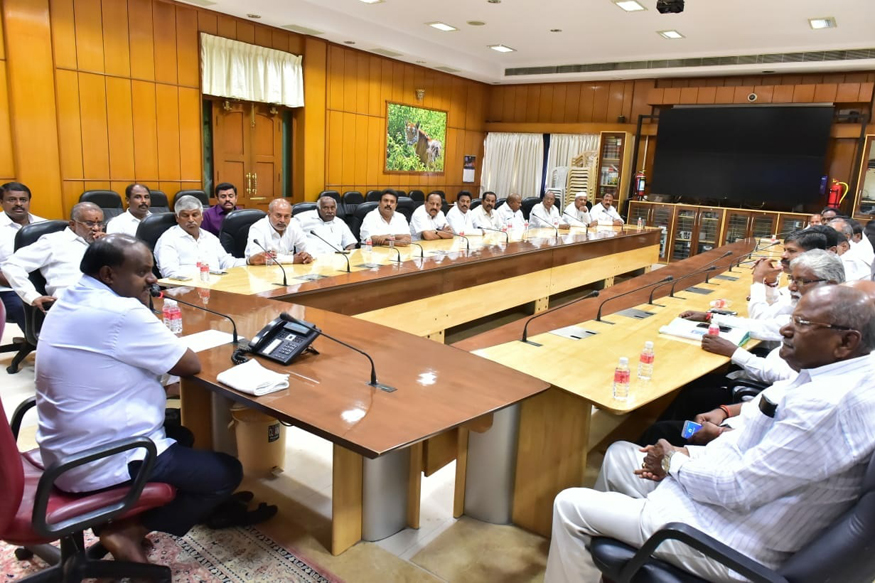 HD Kumaraswamy Arrives in Karnataka for Trust Vote | Karnataka chief minister HD Kumaraswamy arrives at Vidhana Soudha in Bengaluru along with JD(S) MLAs for the floor test, which is set to begin in a few minutes from now. 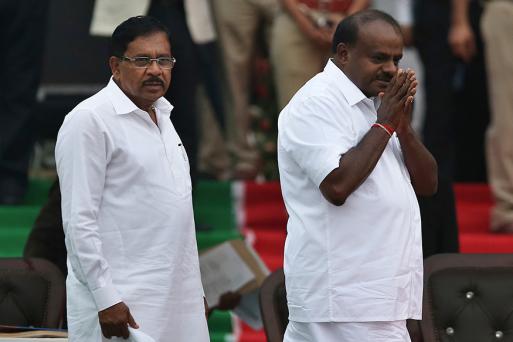 Kumaraswamy has dismissed reports about his party working out a power sharing formula of heading the government for 30 months each but Parameshwara said the Congress is still weighing options.

'Tenure of HD Kumarswamy as CM Will Be Decided by Cong High Command' | “We have to give a stable government and there are small issues in coalition government which will be solved as and when the time come. The main purpose is to keep BJP out of government. The decisions on the CM will be taken by our high command," says senior Congress leader Ramalinga Reddy.

Karnataka DGP Neelamani Raju, who ‘irked’ Mamata Banerjee Transferred? | After West Bengal chief minister Mamata Banerjee expressed her displeasure to the state's top police chief regarding the traffic outside Vidhana Soudha, Karnataka Director General of Police (DGP) Neelamani Raju was reportedly transferred, Financial Express reported. However, a state Home Ministry official said the transfer was nothing to do with the Mamata Banerjee issue but a regular police department affairs. Neelamani, who hails from Uttarakhand, is a 1983 batch Indian Police Service (IPS) officer. In 2017, she was posted as the Karnataka DGP.

Election for Karnataka Speaker on Friday Afternoon | Besides the floor test, the election for the Speaker’s post is also scheduled for Friday afternoon. Congress–JD(S) nominee KR Ramesh Kumar and BJP nominee S Suresh Kumar filed their nomination papers with the Legislative Assembly Secretariat on Thursday. According to a newspaper report, while MLA for Malleswaram CN Ashwathnarayan and MLA for Karkala V Sunil Kumar accompanied Suresh Kumar for filing of nomination papers, Ramesh Kumar was accompanied by Deputy Chief Minister G Parameshwara, former Chief Minister Siddaramaiah and other senior Congress leaders. Suresh Kumar has served as Law and Parliamentary Affairs Minister in the BJP government, and Ramesh Kumar was the Speaker between 1994 and 1999.