On Eve of Burhan Death Anniversary, Forces on Sharp Watch for Trouble

Posters bearing his photograph and messages like 'Go India Go Back' and 'We want freedom' have come up at several places in the valley, especially in South Kashmir

Srinagar: Even one year after he was shot down, Burhan Wani continues to be a bigger adversary to security forces in Kashmir in his death than he ever was alive. Never before, in recent times, has death anniversary of any militant been so anxiously anticipated by security forces as is Wani’s on July 8.

Posters bearing his photograph and messages like 'Go India Go Back' and 'We want freedom' have come up at several places in the valley, especially in South Kashmir.

Forces have geared up to avoid two possibilities this weekend – militant attacks to mark Wani’s death anniversary, and a successful protest that could become an annual ritual.

As the weekend comes closer the state government is appearing to be jittery. Authorities decided to block the internet starting 10 pm Thursday night. Separatist leaders are being taken into preventive custody. Schools and colleges have been shut down. Routes to South Kashmir are being monitored to avoid public gatherings there. And the centre has decided to rush an additional 21,000 additional troops to the valley to contain the situation on the weekend. 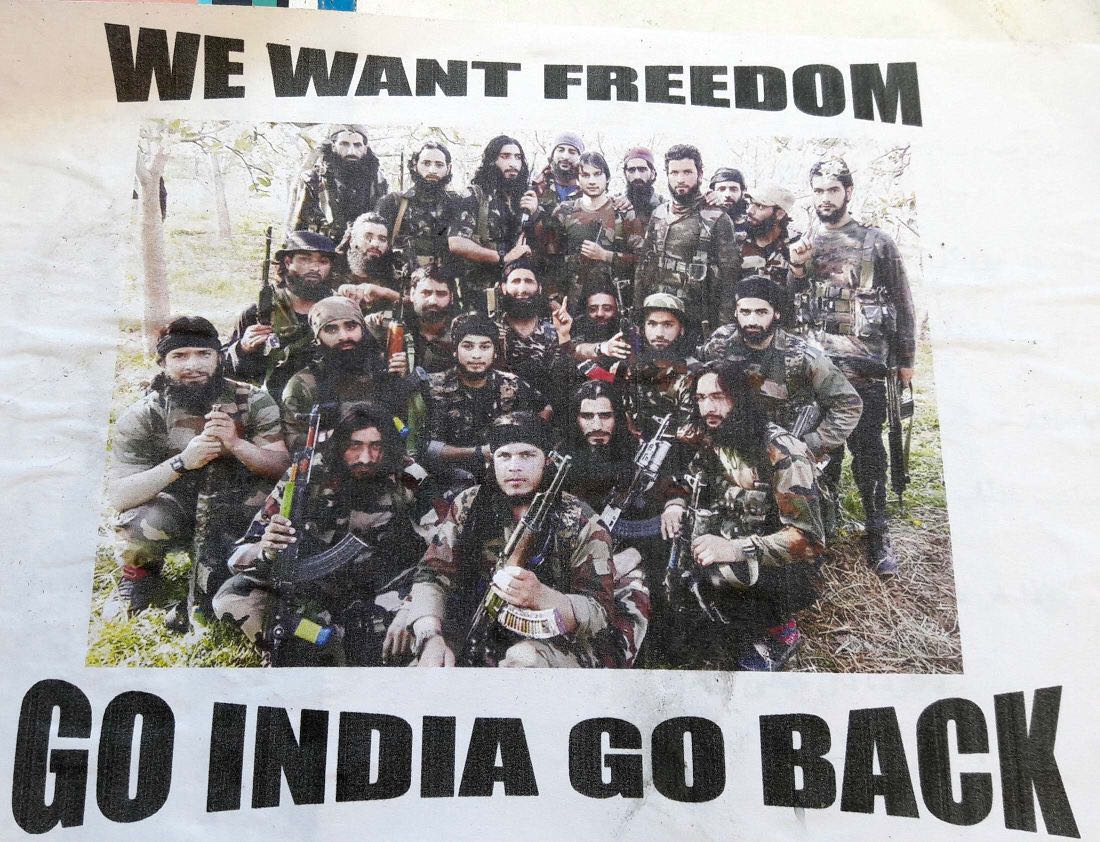 Posters bearing his photograph and messages like 'Go India Go Back' and 'We want freedom' have come up at several places in the valley. (Credit: Qayoom Khan)

The added caution being exercised in view of the ongoing Amarnath Yatra.

“We are well prepared to handle any situation in Kashmir. We have sent 214 companies of central forces to control any situation which may arise on July 8 and during Amarnath Yatra,” Union home secretary Rajiv Mehrishi told reporters in New Delhi.

At the epicentre south Kashmir, police and army are conducting sudden frisking drills to curb movement of protestors from planning rallies in Burhan's hometown of Tral and neighbouring townships and mufassil areas of Pulwama, Pampore, Kulgam, Shopian and Anantnag.

“There is no question of allowing any rally or a gathering on the eve of Burhan Wani’s anniversary,” Muneer Khan, Kashmir's Inspector General of Police told News 18. Burhan who is believed to have given militancy a new lease of life by using social media to his advantage has come to become a cult in Kashmir. (Credit: Qayoom Khan)

At various nakas in Pulwama, Tral and Shopian, commuters and pedestrians are being scanned for banners, confetti, and flags of Pakistan, Taliban and ISIS.

Cellphones of youth are being checked for militant videos and pictures and then deleted or confiscated.

“My mobile phone was smashed to pieces once police found militant clips on it. This way they need to break all phones in Kashmir,” a youth told us near Lelhar, 15 km short of Pulwama.

Many youth near Tral told News 18 that police was seizing their motorcycles, apparently to ensure no motorcycle protest rallies take place.

"If situation demands, we will not hesitate to place old Srinagar and townships under curfew or restriction. We will do everything to maintain peace," Khan said. Cellphones of youth are being checked for militant videos and pictures and then deleted or confiscated. (Credit: Qayoom Khan)

There is every possibility of breach of law and order on July 8, and if any programme is organised successfully, it can become a ‘trend’ in coming years,” the source said adding we don't want that.

Alternately, police and army have been told to be extra vigilant in Srinagar and outskirts against militant attacks. "There are credible inputs of militant commanders having visited Srinagar to strike on Hafta Shahadat (martyrs week)," said a local intelligence officer.

But despite such strict measures in place, the protestors have remained defiant. In many area of South Kashmir, the youth have been able to hoist Burhan banners scribbled with 'Go India Go Back' and 'We want freedom' slogans. At other places, banners depicting pellet victims like Insha have been hung from electric poles and tall poplar trees.

"We will make Burhan Bhai's programme a success. We hoist the banners in the night and if police comes to pull them down we will not allow them to," a teenager told us at a Rohomu roundabout where many banners and confetti have been put up.

In Tral near the graveyard of Burhan, we saw many young boys offering Fateh prayers.

"Come what may, we will carry out a rally here and we are doing it because we love Burhan," a youth said adding we are following no separatist leader's programme. In Tral near the graveyard of Burhan, many young boys were offering Fateh prayers. (Credit: Qayoom Khan)

Both the separatists and Muzaffarabad based United Jehad Council (UJC) have given the call to commemorate the death anniversary of Burhan by giving a week long protest calendar.

Separatist troika Syed Ali Geelani, Mirwaiz Umar Farooq and Muhammad Yasin Malik had earlier called for a complete shutdown on July 8 and asked people to reach Tral where they would address a freedom gathering jointly.

The government has responded by arresting Malik and scores of separatist leaders and home detaining Geelani and Mirwaiz besides announcing a 10-day summer vacation in all educational institutions from July 6. All to ensure there are no protests in the Valley. Burhan who is believed to have given militancy a new lease of life by using social media to his advantage has come to become a cult in Kashmir. He has inspired a new breed of young militants to take centre stage and fight against what Wani termed was "India's illegal occupation of Kashmir".

Former chief minister Omar Abdullah had last year said: "A dead Burhan can prove more dangerous than a living one." True, the cult of Burhan is finding many followers.