Praveen Swami
New Delhi: The Jammu and Kashmir Police has decided to cease handing over the bodies of slain terrorists to their families, highly-placed government sources have told Network18, after they faced growing crowds of protestors chanting Islamist slogans at the funerals.

Instead, the sources said, the burials are being conducted by local authorities, under the supervision of a magistrate. “Every effort is being made to conduct burials in a respectful manner, in the presence of their families and in full compliance with religious requirements,” a senior officer of the Jammu and Kashmir Police said. “DNA samples are also being maintained to ensure transparency”.

“There is no legal obligation to hand over bodies of terrorists killed in combat to their families”, the officer said. “Recall that even the body of Mohammad Afzal Guru, the Parliament House attacker, was buried in Tihar Jail after his hanging”.

However, the family of slain jihadist Uzair Ahmad Bhat, from the district of Baramulla in north Kashmir, could not attend the burial.

Hizbul-Mujahideen jihadists Sajad Ahmed, hailing from the village of Daramdora in Shopian and Sartaj Ahmed from Yaripora in Kulgam—both killed in an intense firefight on the Line of Control near Keran earlier this month—were also buried in a south Kashmir graveyard, along with three unidentified jihadists believed to be Pakistani nationals.

The burial of Hizbul Mujahideen’s Mohammed Ashraf Malik in Kulgam’s Arwani also drew large crowds. The gatherings—the first since Article 370 was de-operationalised in August—raised fears that jihadists were reappearing.

The phenomenon had started in 2015, when large crowds had begun assembling in Kashmir with the funeral Lashkar-e-Taiba jihadist Abdul Rehman, also known as Abu Qasim.

A senior police official warned, however, that not handing over bodies to families could become an additional propaganda tool for jihadist groups. “Burying the bodies doesn’t stop jihad sympathisers form holding funeral rites in the absence of the corpse, as has been done many times in the past,” he pointed out. “There’s also the possibility that mobs will try to dig up the corpses, and carry them back to villages”.

“The attendance at jihadist funerals is a symptom of growing resentment against the government, and a political vacuum that’s allowing Islamists to cash in on it,” the officer said. “That’s the problem we really need to be fixing”. Local authorities in Kashmir have long had responsibility for the burial unidentified terrorists—among them, the thousands of Pakistani nationals killed while attempting to cross the Line of Control, or in encounters with Indian forces inside Kashmir.

Islamabad has long refused to acknowledge that those slain are Pakistani nationals, and accept repatriation of their remains, even though jihadist groups based in that country have published lists of those killed, along with obituaries.

In 2011, allegations surfaced that those buried in these graveyards also included missing ethnic Kashmiris, alleged to have been victims of extra-judicial executions by Indian security forces. Former chief minister Omar Abdullah had responded angrily to the allegations, saying “with authority that all the disappeared persons are not buried in these graves”.

Later, the State Human Rights Commission had ordered the government to collect DNA samples for 2,156 unidentified bodies buried in 38 graveyards across five districts of north Kashmir. Few families, though, came forward to seek DNA cross-matching with the samples.

Former chief minister Mehbooba Mufti told the Jammu and Kashmir Assembly that another 4,088 persons listed as missing in government records were living in Pakistan-occupied Kashmir, many serving in jihadist groups.

The government’s willingness to risk controversy by refusing to hand over the bodies of jihadists, sources said, is driven by signs that the months-long hiatus in violence that followed the de-operationalisation of Article 370 could be coming to an end. 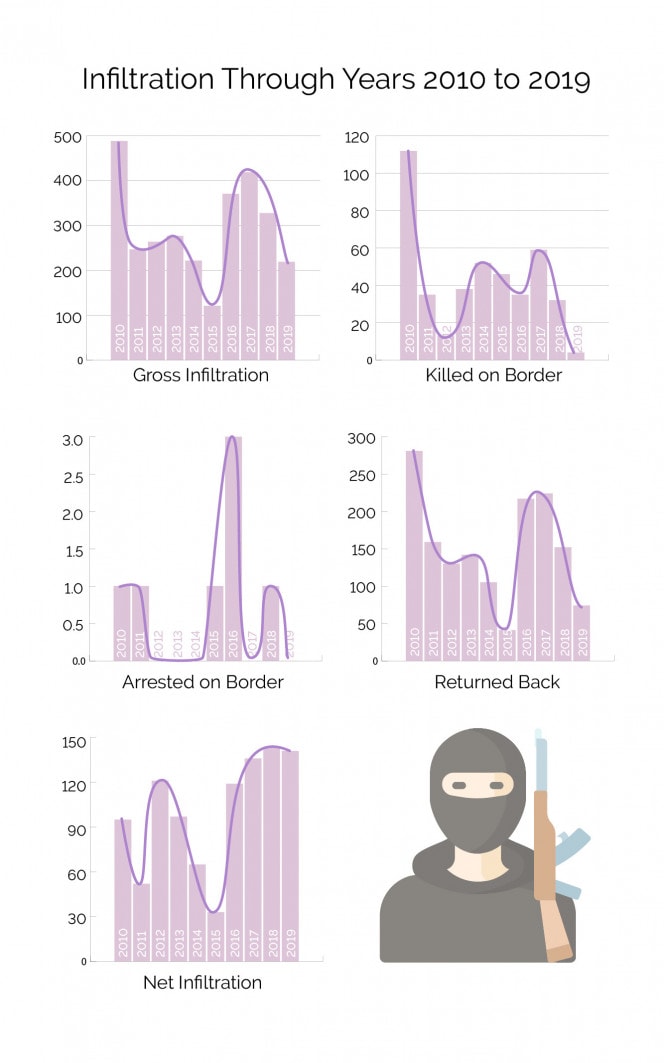 From January 1 to April 20, police records show, 34 Kashmir residents are believed to have joined jihadist groups—numbers similar to the 41 who did so in the same time period last year, and a sharp increase over the zero recruitment witnessed from August to November.

Police records also show that 46 terrorists were killed from January 1-April 20—well below the 71 killed in the same period of 2019, but again a sharp increase from the months after Article 370 was de-operationalised.

Even though security force fatalities appear to have dropped sharply for this period, to 17 from 61 during the corresponding period of last year 2019, the numbers are almost identical if a single, unusual incident—40 central police personnel killed in Pulwama—are removed from last year’s tally. “All in all”, a senior police officer observed, “we seem to be inching backwards to where we were.”
Praveen Swami