The map covers the route taken by the family after they landed at Kochi airport till they reached Ranni and various places, including a church, post office, jewellery store, hypermarket, shopping complex they had visited in the following days.

Thiruvananthapuram: The Kerala government has released a map of the route taken by the three-member family which returned to the state from COVID-19 hit Italy, on February 29, with an aim to track all those who had come in contact with them.

All the places visited by the family upon their return have been mentioned in the map so that people can voluntarily inform authorities if they had come in touch with them.

A middle-aged couple and their 24-year-old son had reached Kochi airport on February 29 and allegedly not informed airport authorities about their travel history.

The three had tested positive on Saturday along with two of their relatives staying with them in Ranni, their home town in Pathanamthitta district. 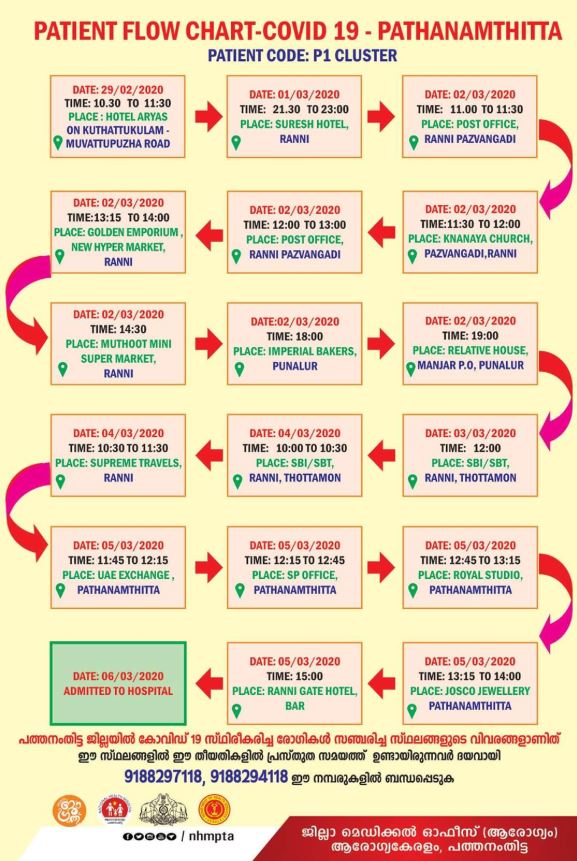 The route that the family followed as they returned from Italy.

On Tuesday, six other relatives, including aged parents, and friends of Italy returned family, had also tested positive.

The map covers the route taken by the family after they landed at Kochi airport till they reached Ranni and various places, including a church, post office, jewellery store, hypermarket, shopping complex they had visited in the following days.

There are reports the family had also travelled in a bus.

Pathanamthitta District Collector P B Nooh said there was no need to shut down the places visited by the family.

The aim was to track down the last contact of the affected people.

The contact list of three others — a three-year-old child and his parents, who have also tested positive for the deadly virus, has also been prepared, health authorities said.

"We have traced and prepared a list of persons who were in the flight with the family", they said.

So far 14 positive cases have been reported in Kerala.

India's first 3 corona positive cases from the state have been cured and discharged from hospitals.

As a precuationary measure, visitors would not be allowed at the Kerala assembly in the backdrop of the virus scare, a press release from the assembly secretary said.

Meanwhile, all those working at outlets under beverages corporation have been directed to wear masks and gloves in the wake of the spread of covid19.

Neyyar dam has been closed for 10 days as a precautionary measure.

The government has also designed a campaign involving elderly people, who would inform the authorities about anyone coming to their homes from abroad.

School children would also be engaged in this effort to learn about their relatives coming from abroad, a health official said.

A two-month old child and her mother are at the isolation ward of the hospital in Pathnamthitta.
Tags