Heidi Saadiya, who formally joined Malayalam news channel Kairali News TV on August 31, made her debut with her reportage on Chandrayaan-2 development.

Thiruvananthapuram: As India reached one step closer to historic moon mission as lander 'Vikram' separated from Chandrayaan-2 orbiter on Monday, 22-year-old Heidi Saadiya from Kerala was also making history. Saadiya, who made her debut as a reporter today, is the first transgender broadcast journalist from the state.

As her first assignment, Saadiya, who formally joined Malayalam news channel Kairali News TV on August 31, reported on the Chandrayaan-2 development. Later in the day, speaking to News18, Saadiya said she was happy that people have started to give space to the LGBTQ (Lesbian, Gay, Bisexual, Transgender and Queer) community.

“After my post-graduation course in electronic media from the Trivandrum Institute of Journalism, I was working as an intern with Kairali TV. After interning for a week, the company offered me the post of ‘News Trainee’ after evaluating my performance,” said Saadiya. 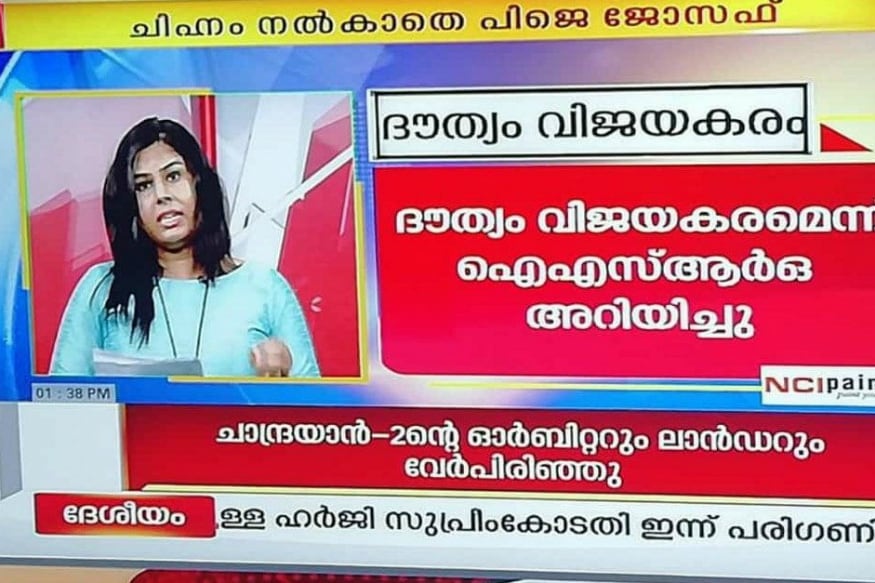 “This is a profession that I feel has no discrimination. The newsroom feels like a second home to me. I hope the LGBTQ community gets more such inclusive workspaces in future,” she said. Saadiya, who left her house at the age of 18, said she has no complaints against her parents who refused to accept her. “I just want them to see what I am doing right now,” she added.

Kerala Health minister KK Shailaja took to Facebook to congratulate Saadiya and said that it was a proud moment for all Indians. “Chavakkad native Saadiya has made a successful move at a moment when Chandrayaan 2 lander, 'Vikram', successfully separated from the orbiter. She’s the first transgender broadcast journalist from Kerala,” Shailaja said, adding that Saadiya is also an inspiration for the rest of the transgender community.