Kolkata: A metro train is set to move after the inauguration of the phase-I of the East-West Metro service, at Salt Lake near Kolkata. (PTI)

Kolkata: After 36 years of perennial wait, Kolkata got its second metro line as Union Railway Minister Piyush Goyal flagged off the first phase of the East-West corridor of the mass transport network on Thursday. The East-West corridor will be operational for commuters Friday onwards. 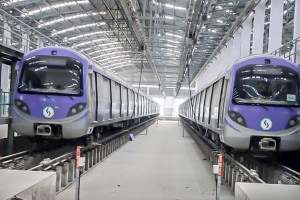 The Kolkata Metro was the first metro railway in India, opening for commercial services from 1984. It is presently the fifth-longest operational metro network in India after Delhi, Hyderabad, Chennai and Namma (Bengaluru).

For almost four decades, the sole corridor of Kolkata metro traversed through 24 stations, of which 15 are underground, covering a meagre distance of 27.3km from Noapara to Kavi Subhas. On Thursday, the inaugural train zoomed off from Sector V station to traverse a 4.88-km distance to the Stadium. Meanwhile, Goyal said that the entire 16.5-km stretch of the corridor – till Howrah Maidan - is likely to be completed in two years.

"The entire stretch of the East-West Metro corridor from Sector V to Howrah Maidan is likely to be completed in two years, provided bottlenecks affecting it are cleared through local support," Goyal said in his speech.

The East-West Metro corridor has received a grant of Rs 905 crore — the highest among the five projects currently underway in Kolkata. It is estimated to cover a 16.5 kms long stretch connecting Howrah on the West bank of River Hooghly with Salt Lake city on the East bank.

The project is being executed by Kolkata Metro Rail Corporation Limited (KMRCL). The new line of the metro will have 10.8 kms of the stretch is underground and 5.75 kms will be on an elevated viaduct.

The East-West corridor of the Kolkata Metro is India’s first-ever transportation project where metro trains will ply under river — Hooghly.

The Metro project, scheduled to be completed by June 2021, had faced an unprecedented jolt last year, when a tunnel-boring machine hit an aquifer in Bowbazar area of the city, causing severe ground subsidence and damage to several buildings.

The accident further delayed the completion of work by another year, with the authorities now eyeing a 2022 deadline.

Besides, the inauguration of the second metro corridor n Kolkata, however, was marred by political tussle between the BJP and the ruling TMC after the West Bengal Chief Minister was not invited for the event. Consequentially, the TMC gave the event a miss protesting against the absence of Banerjee's name from the invitation card for the programme.

Kolkata metro has five other ongoing railway projects, which have been allotted a budgetary grant of Rs 1,542 crore for fiscal 2020-21.

The New Garia-NSCBI Airport link, slated to be completed by June 2021, has been allotted Rs 328 crore, while the Noapara-Barasat line has received a grant of Rs 200 crore.

Another 16.6-km Joka-BBD Bag route, connecting the south-eastern suburbs of Behala with the heart of the city, has been granted Rs 99 crore, and the Barrackpore-Baranagar and Dakshineswar stretch, covering a distance of 14.5 km, allotted Rs 10 crore.