Former Indian Navy officer Kulbhushan Jadhav's wife and mother met him for the first time after his detention in March 2016, but they were seated across a glass partition at the Pakistan Foreign Office. The two women reached the Pakistan Foreign Office in Islamabad amid tight security arrangements on Monday morning. Meanwhile, the Pakistan Foreign Office has clarified in a statement that they have not granted India consular access to Kulbhushan Jadhav. The Pakistani media had earlier reported that the Pakistan government has granted consular access after denying the same for 22 times in a row. According to a report by Geo News, Pakistan Foreign Minister Khawaja Muhammad Asif had said so. In India, officials however downplayed the comments by the Pakistani minister, maintaining that an Indian diplomat was only accompanying Jadhav's family and it cannot be construed as "consular access". Jadhav's family is expected to leave Pakistan soon after the meeting. India's Deputy High Commissioner J P Singh is also accompanying the family for the meeting. Twenty-two months since Kulbhushan Jadhav was taken into illegal detention in Pakistan, his family will finally get a glimpse of him on Monday. An official from the Ministry of External Affairs is also accompanying the two to Pakistan.

Security is the reason for not allowing physical contact. Glass barrier was used for security. We had informed our Indian counterparts about it in advance. We did not want any physical contact due to important security considerations: Mohd Faisal

Security is the reason for not allowing physical contact. Glass barrier was used for security. We had informed our Indian counterparts about it in advance. We did not want any physical contact due to important security considerations: Mohd Faisal

Pakistan foreign office says the meeting has no link to and will have no bearing on the case underway in the International Court of Justice. Its spokesperson Mohd Faisal says negotiations are difficult as both sides have national interests. “We had to come at a meeting point, so we did not accept some of their (India's) conditions. There were more than 3 conditions by Indians to which we didn't agree,” he says.

It was a humanitarian meeting, it was not consular access. The Indian diplomat JP Singh was present and could see the meeting but was not allowed to meet. We extended the meeting by 10 minutes on the request of Jadhav’s family: Mohd Faisal

“Jadhav has been kept in comfort here and is in excellent health. We don’t have anything to hide. This is a positive gesture from Pakistan’s side,” says Faisal, and claims India is the one not coming clean. “India unwilling to explain Jadhav's second passport,” he says.

When asked why Jadhav’s family was not allowed to speak to media, the Pakistan foreign office said it was the family’s request. “We received Indian request for meeting of family. We uphold Islamic rule of mercy,” Faisal said.

Jadhav is the face of Indian terror in Pakistan. He has confessed to killing Aslam Chaudhary. He expressed remorse for taking Pakistani lives. Jadhav, who is a serving naval officer, has confessed to being a R&AW agent: Mohd Faisal.

He reiterated that the meeting does not mean any change in Pakistan’s stance regarding Jadhav. “Jadhav is a spy and terrorist. He has been sentenced to death by Pakistan,” he says.

Mohammad Faisal, the spokesman for the Pakistan’s ministry of foreign affairs, is addressing a press conference on Jadhav’s meeting with his family. “It was a very important day for Pakistan as it is Jinnah’s birthday. Hence, this day was chosen for the meeting,” he says.

In one sense, it is a step forward because 22 months after they arrested this poor man, finally somebody is able to see him. On the other hand, the way in which role unfolded was deeply unsatisfactory: Congress leader Shashi Tharoor on Kulbhushan Jadhav's meeting with his family.

#BringBackJadhav -- I am thankful to Pakistan and ministry for this meet. I had requested to meet my mother and wife, I am really thankful to the Government of Pakistan: #KulbhushanJadhav pic.twitter.com/sw0CqBYHw3

Pakistan is airing a statement by Kulbhushan Jadhav. “I am thankful to Pakistan and the ministry for this meet. I am really thankful. I had requested that I meet my mother and wife,” he says.

Kulbhushan's friend Sachin Kale says the meeting was a result of the international pressure put on Pakistan. “They were forced to organise this meeting,” he says, but adds that this was not a person to person meeting. The family of Jadhav met him from behind a glass partition and spoke via intercom. “We are looking forward to a statement from Kulbhushan's family.”

Kulbhushan Jadhav’s mother and wife leave from Pakistan Foreign Affairs Ministry in Islamabad as their meeting with him ended. The meeting lasted for roughly 40 minutes. The family will now head to the Indian High Commission for lunch, and will leave for the airport from there around 5pm IST.

#KulbhushanJadhav's mother and his wife at Pakistan Foreign Affairs Ministry in Islamabad after their meeting with him ended. Deputy High Commissioner JP Singh also present. pic.twitter.com/kpWP7VVUzm

The meeting between former Indian Navy officer Kulbhushan Jadhav and his wife and mother lasted a little over 30 minutes. Now they are headed for the Indian High Commission in Islamabad for lunch. The two women are expected to leave from Pakistan around 5pm.

The Pakistan Foreign Office authorities are expected to address the media soon as the meeting between Kulbhushan Jadhav and his wife and mother comes to an end. The family won't be speaking to the media that is present right outside the Foreign Office in Islamabad.

MEETING ENDS | The Pakistan Foreign Office has issued photos from inside the meeting venue even as there are reports emerging that meeting between Kulbhushan Jadhav and his wife and mother has ended.

Meeting between Commander Kulbushan Jhadev & his family in progress pic.twitter.com/THG925V1fO

More photos emerge from inside the Pakistan Foreign Office, where Kulbhushan Jadhav met his wife and mother after being kept under illegal detention.

NO PRIVATE MEETING | Denied a one-on-one meeting, former Indian Navy office Kulbhushan Jadhav met his wife and mother at the Pakistan Foreign Office in Islamabad sitting across a glass partition and speaking on a speaker phone. The phones that were provided to Jadhav and his family for the interaction were only speaker-enabled, with the receiver sealed so that they are not able to have any private conversations.

Officers of the Pakistan Foreign Office are seen closely monitoring the brief interaction that Kulbhushan Jadhav was allowed to have with his mother and wife after a 22-month wait. Jadhav was not allowed to meet his family in close proximity and was only seated in different rooms, meeting them from across a glass partition. FIRST PHOTOS OF JADHAV SINCE DETENTION | In an exclusive photo clicked at the Pakistan Foreign Office, Kulbhushan Jadhav is seen interacting with his mother and wife across a glass partition. Jadhav wearing a blue coat can be seen sitting in a separate room from his family members who he is meeting after 22 months since his illegal detention. 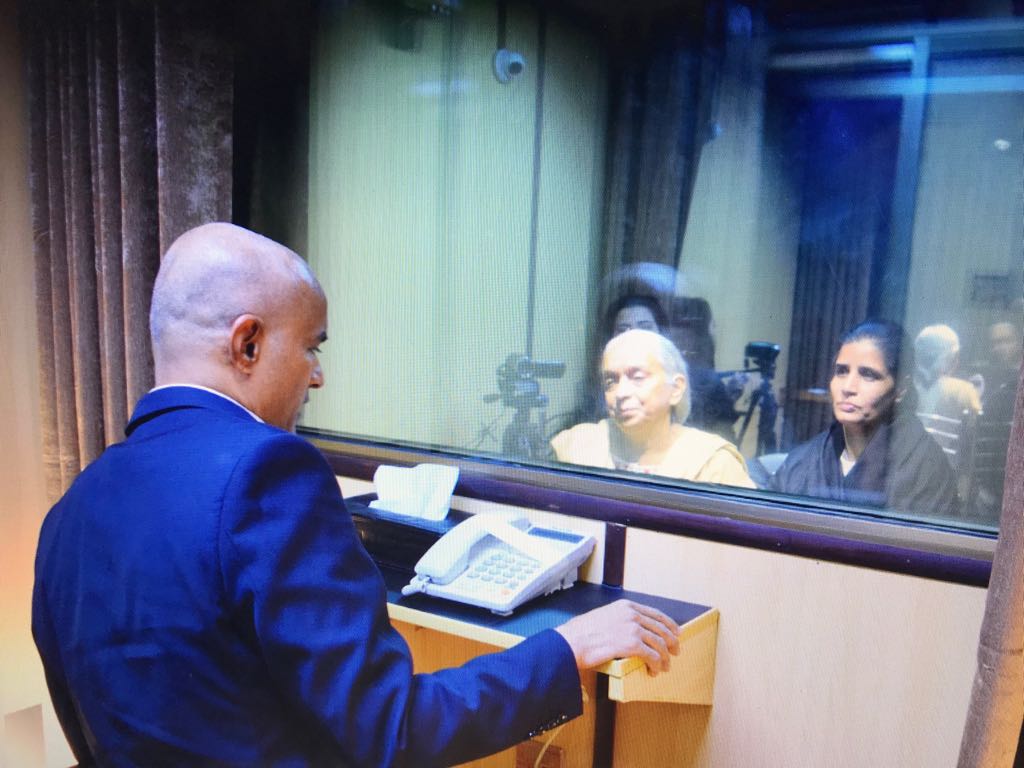 Kulbhushan Jadhav's mother and wife walk into the Pakistan Foreign Office in Islamabad.

From Pakistan's side, Foreign Office Director India Dr Fareha Bugti was present at the meeting between Kulbhushan Jadhav and his mother and wife. The two women arrived in the capital via Dubai in a commercial flight and are expected to leave soon after the meeting where they will be accompanied by Singh. Strict security measures are in place at the ministry, officials said.

The wife and mother greeted the media after arrival but refused to respond to questions. Kulbhushan Jadhav's family arrived at the Ministry of Foreign Affairs from the Indian High Commission where the wife and mother of Jadhav halted for more than half an hour. Jadhav was at the MOFA before the arrival of his family. It was not known where he had been kept before being transported to the ministry.

Accompanied by Deputy High Commissioner JP Singh and a woman Pakistani official, TV footage showed Kulbhushan Jadhav's family entering the main building of the Ministry of Foreign Affairs and the door shutting behind them. "The meeting between Jadhav and his wife and mother has started," Pakistani officials said.

The Pakistan Foreign Office tweeted the image saying: "The mother and wife of Commander Jadhav sitting comfortably in the Ministry of Foreign Affairs Pakistan . We honour our commitments." 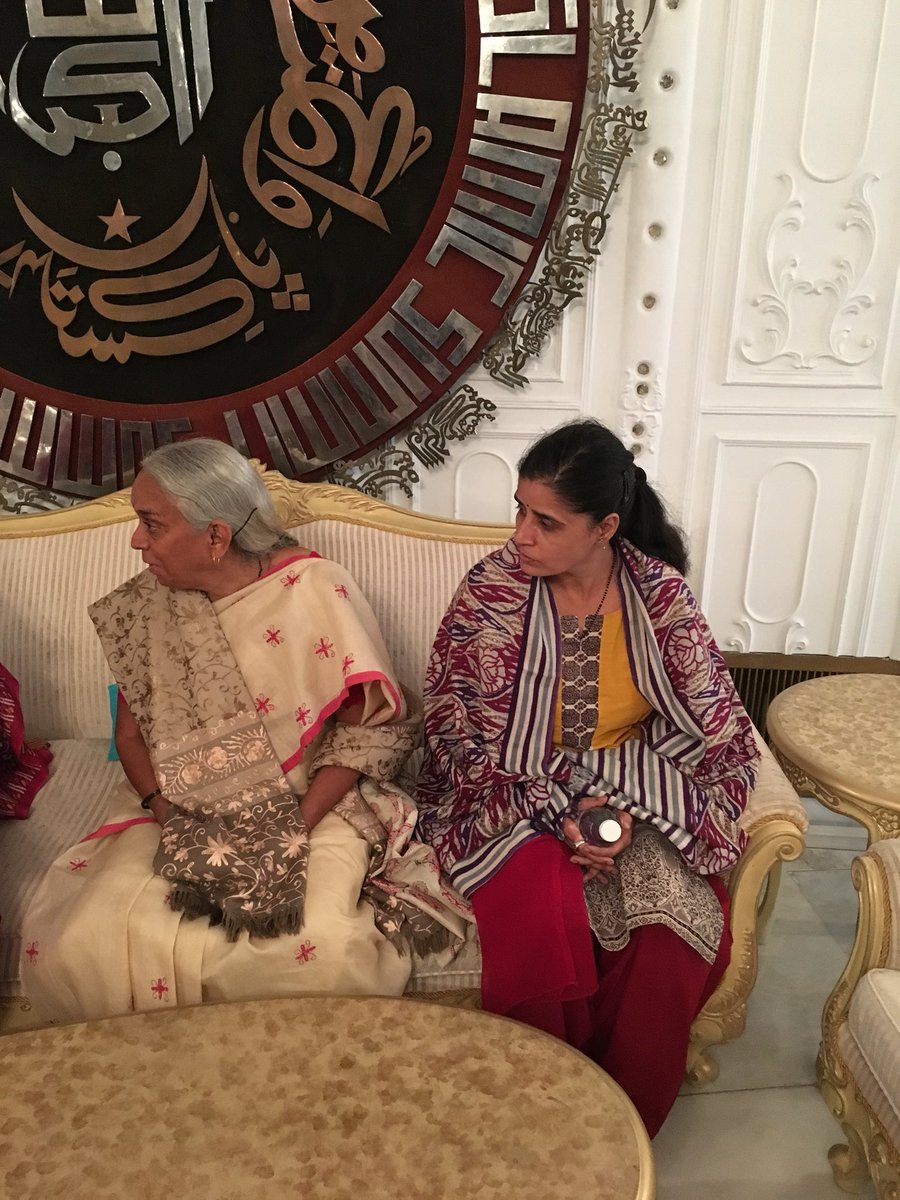 FAMILY WON'T TALK TO MEDIA | Sources say Kulbhushan Jadhav’s wife and mother will not be speakING to the media but officials of the Pakistan foreign office will brief the media persons present at the venue after the meeting.

FAMILY SEATED INSIDE OFFICE | The Pakistan Ministry of Foreign Affairs said, “The mother and wife of Kulbhushan Jadhav are sitting comfortably in the ministry of foreign affairs Pakistan. We honour our commitments.”

Kulbhushan Jadhav interacts with his mother and wife across a glass partition.