The Mahakal temple security personnel was alerted by a flower seller, who recognised Vikas Dubey when he had pulled down his mask.

From an Uttar Pradesh liquor trader's help to Mahakal temple's security guard spotting the gangster, many stories have emerged since Vikas Dubey was arrested in Madhya Pradesh's Ujjain on Thursday morning. However, official word from the UP Police is still awaited.

The security guard at the Ujjain temple told reporters that the man, who later turned out to be Dubey, was trying to seek 'darshan' at the temple from the back gate after arriving there at 7am. Some sources have claimed that the gangster himself asked the security personnel to inform the police about him, following which the officers came and took him away.

Some opposition leader from the Congress and the Samajwadi Party have also sought a clarity on his arrest. While Congress said that the act was "stage-managed", SP supremo Akhilesh Yadav asked the Uttar Pradesh government to clarify whether it was a "surrender" or an "arrest", and also demanded DR (call details record) to be made public "so that those hand in glove with him could be exposed". 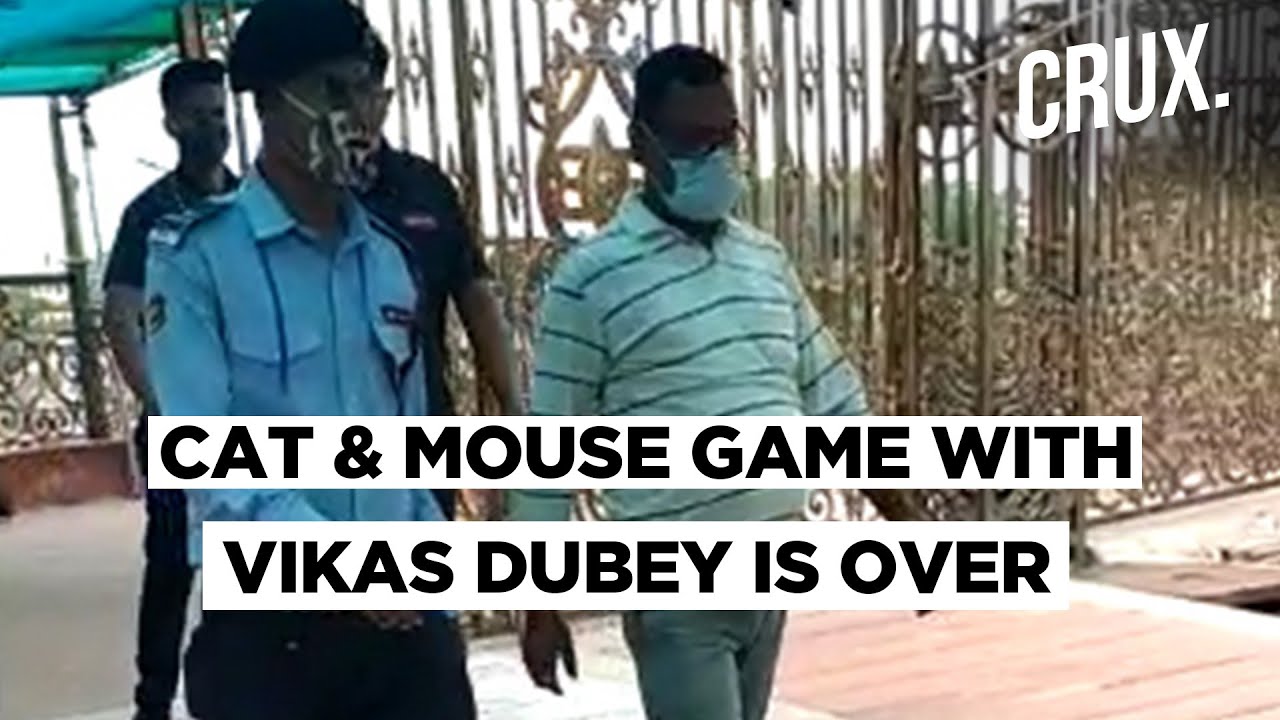 Sources in MP said that Dubey roamed inside the temple for about two hours during which the security guard kept monitoring his activities. The security personnel was alerted by a flower seller outside the temple who had first seen the gangster when he pulled down his mask.
One of the temple caretakers, Gopal Kumar, said, "I was planning for distribution of prasad, when a man came to me and asked me where he could keep his bag and shoes. I asked him to keep his belongings at the counter and he then went inside the temple. The security personnel grew suspicious about him and stopped him when he came out of the temple."

The home guards posted at the security desk at the temple claimed that initially Dubey tried to mislead them with a fake name and said that he came here from Gwalior to seek blessings. Dubey also "tried running away and manhandled the check post employees".

But the employees overpowered him and made him sit there while they called the police from the nearby chowki, sources claimed. When he was brought to the police chowki, he identified himself as Vikas Dubey.

A video later also went viral in which some policemen and others are holding Dubey close to a police van and someone asks, "Ye wahi hai kya?", to which Dubey shouts and replies: "Main hoon Vikas Dubey, Kanpurwala." The gangster's dramatic introduction of himself in Sanjay Dutt's 'Khalnayak' style seems to have stemmed out from his love for Bollywood.

Security guard Lakhan Yadav told the media that they had seen Dubey in pictures and turned suspicious after he arrived at the temple. With the help of CCTV, we monitored him for two hours and later nabbed him. Two more persons had accompanied him. We had informed our superiors and the police, added Yadav. It is said that Dubey had Rs 250 VIP darshan slip with him.

Ujjain Mahakal temple is a highly secured zone and amid coronavirus scare, devotees are restricted with online pre-booking or Rs 250 VIP slip.

Ujjain collector Ashish Singh later confirmed this incident but had claimed that the gangster was nabbed before he could seek darshan at the temple. A couple of days ago, UP STF had picked up Dubey’s brother-in-law Raju Nigam from Burhar in Shahdol. Police is also inquiring if the gangster Dubey came to Ujjain via Shahdol.

Earlier on Thursday, MP police had arrested two men, Suresh and Bittu, who are said to have travelled along with Dubey in a private car registered in the name of one Manoj Dubey from Lucknow. The car was recovered by police at local Dewas Gate area in Ujjain.

A liquor trader, identified as Anand Tiwari and said to be a distant relative of Dubey, has been arrested from the Nagjhiri area of Ujjain, sources said. Trader, who belongs to Chitrakoot in Uttar Pradesh, worked as a manager with a liquor company in Ujjain, was perhaps instrumental in helping Dubey reach Ujjain and also allegedly arranged his stay in the town, the sources added.

Sources said that UP police officers have also left for Ujjain in a special chartered plane to take Dubey along with them.

The MP police, meanwhile, is puzzled with the gangster's entry into the state after "crossing boundaries of three states and close to seven districts". To add, there is police deployment on state borders and district borders in the wake of Covid-19 outbreak, sources said.
Tags: