Congress president Rahul Gandhi marched from the Congress headquarters to India Gate in the heart of Delhi at midnight to demand justice for the Kathua and Unnao rape victims. "Like millions of Indians my heart hurts tonight. India simply cannot continue to treat its women the way it does. Join me in a silent, peaceful, candlelight vigil at India Gate at midnight tonight to protest this violence and demand justice," he said in a tweet. The midnight march comes amid nationwide horror over the chilling details of the brutal gangrape of an 8-year-old being revealed in a chargesheet filed by Jammu and Kashmir police. In Unnao, Uttar Pradesh, the BJP MLA accused of rape has still not been arrested despite a case being registered under POCSO, which mandates immediate arrest. The case has now been transferred to the CBI.

Congress President Rahul Gandhi has left the India Gate area and the police have opened the barricades, people are leaving. Severe traffic jam in the area as thousands try to leave protest venue. 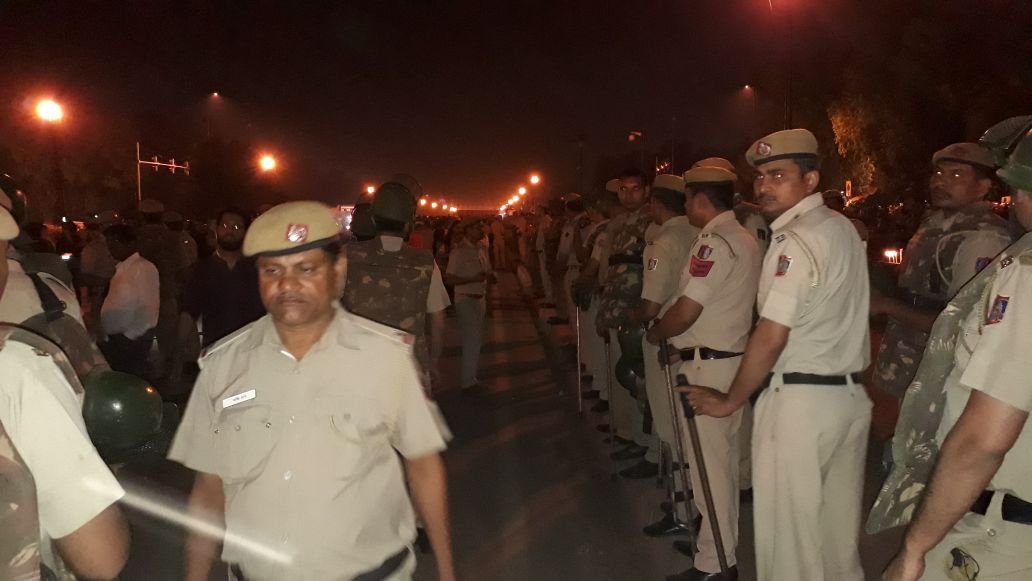 Rahul said the protest march was not a political fight but a signal to the government that it must resolve issues of women safety.

Robert Vadra tells CNN-News18, “We have to respect our women... it’s insane what’s going on. We need change. Need justice for the little girl.”

RAHUL GANDHI SPEAKS | "India's women are on this day scared to step out of the house. We want the government to resolve this issue. We want the women to live in peace and security," says Rahul Gandhi during his midnight march at the India Gate. He adds, "This is not a political issue. There are people from different political parties who have gathered here." 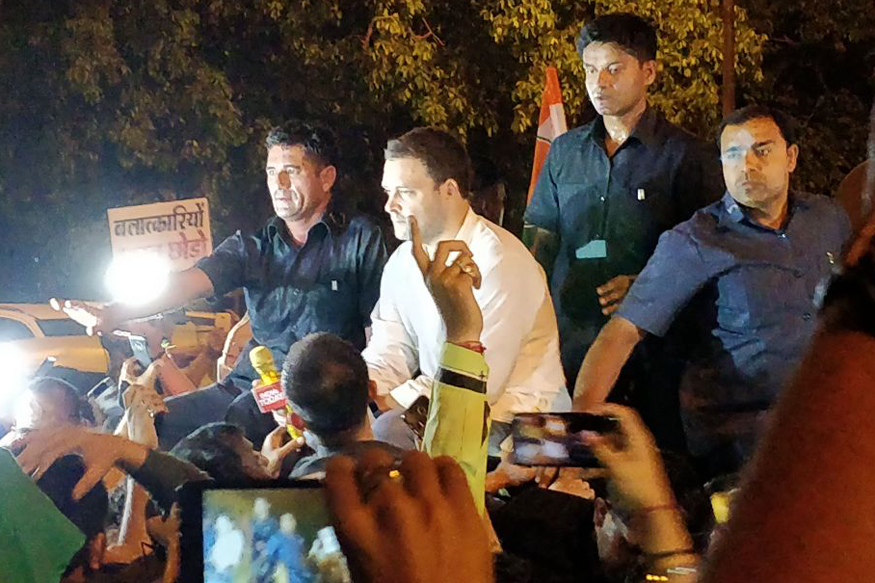 PRIYANKA GANDHI UPSET | After being heckled by fellow protesters and those who have come in support of the Congress march, Priyanka Gandhi gets upset abd says those who want to push and shove each other, they can go homes. PDP leader Muzaffar Hussain Baig said that he believes there is no question of Mufti resigning on moral grounds, instead she should ensure that justice is delivered to the little girl who was violated and murdered with pre-meditated brutality.

Several Congress leaders also poked fun at the Modi government's Beti Bachao slogan, saying the daughters were not safe in the country. Announcing the march, Rahul Gandhi had tweeted in the evening, "Like millions of Indians my heart hurts tonight. India simply cannot continue to treat its women the way it does."

PRIYANKA HECKLED AT WOMEN'S MARCH | Priyanka Gandhi Vadra heckled at the march as several protesters gathered around and some even pushed her while she was trying to talk to the media at the India Gate. In a video shot by CNN-News18's Zeba Warsi showed Priyanka and other women marchers being pushed and shoved at the march.

Congress chief Rahul Gandhi led a midnight candle light march to the India Gate here to protest the Kathua and Unnao minor rape cases with the party leaders alleging that the daughters of the country were not safe in the Modi regime. Gandhi was joined by his sister Priyanka and her husband Robert Vadra, as also scores of Congress leaders, party workers and students, who shouted slogans against the Modi government and the state governments in Uttar Pradesh and Jammu & Kashmir and demanded urgent action against the perpetrators of two heinous gangrapes -- one in Unnao (UP) and the other in Kathua (J&K).

Why is the media stopping us from reaching India Gate. Stay quiet. Remember what you've come here for. Let us march or we'll sit here all night: Priyanka Gandhi 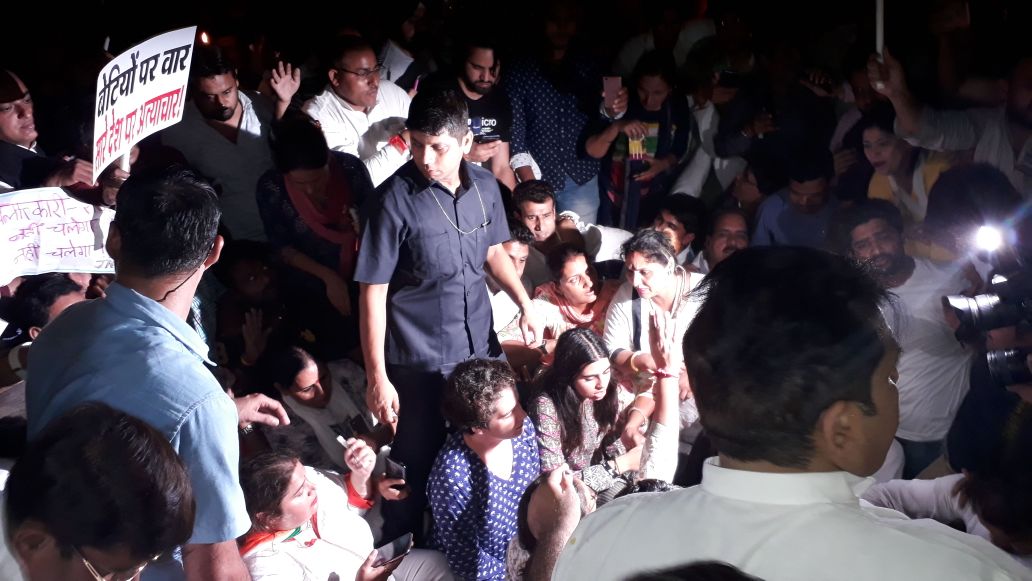 MASSIVE GATHERING | Around 3,000 people have gathered in and around India Gate while police have put up several barricades around the area, however, several hundreds jumped over the barricades and overpowered the police presence and are now marching towards the venue. Jammu: The Bar Association of Jammu (BAJ) on Thursday alleged that their agitation for a CBI probe into the Kathua rape and murder case to ensure justice for the eight-year-old-victim was being portrayed as communal by those with a "Kashmir-centric mindset".

Priyanka Gandhi and Robert Vadra have joined the protests along with their children. (TV grab) Hundreds have gathered at the India Gate protest with candles in hand. (Image: News18) 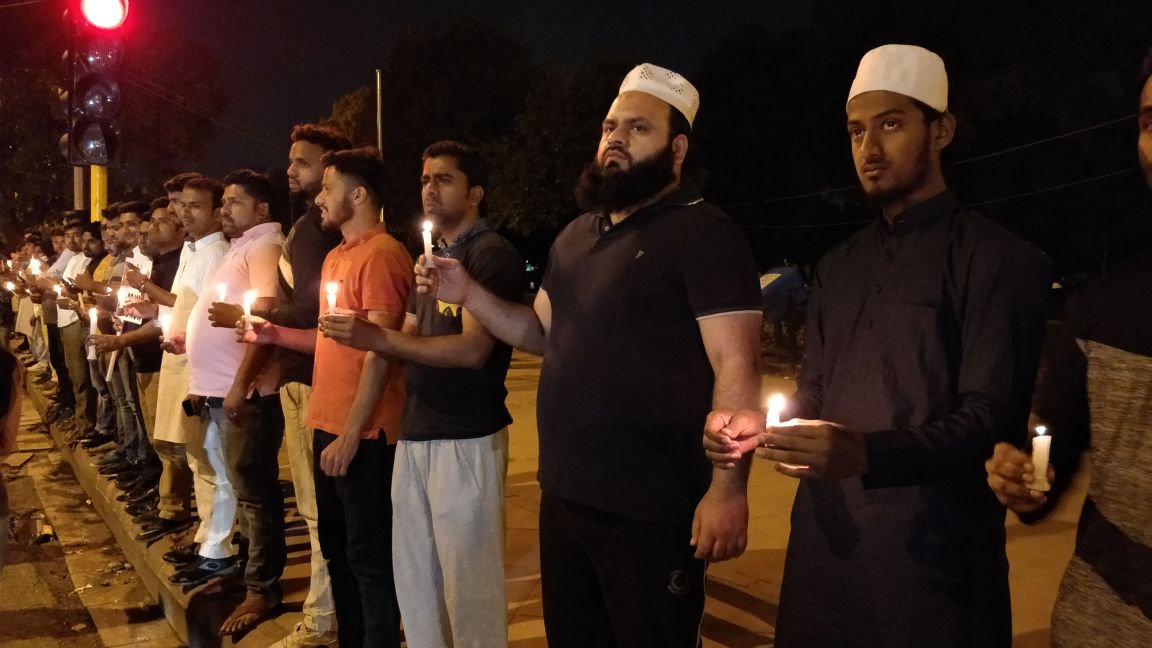 SLOGANS AGAINST MODI | Slogans being raised at India gate. “Jootey maaro saalo ko”; “Phansi do”; "Narendra Modi sharam karo, Narendra Modi doob maro". This was supposed to be a silent march with candles in hand.

MUFTI STATEMENT | Jammu and Kashmir Chief Minister Mehbooba Mufti today said her government will enact a new law to make rape of minors punishable by death and asserted that justice will be delivered in the rape and murder case of an eight-year-old Bakerwal girl in Kathua district. The rape and murder of the girl from the nomadic community has created a controversy after lawyers in Jammu called for a shutdown on Wednesday, demanding the case be handed over to the Central Bureau of Investigation (CBI). We will never ever let another child suffer in this way. We will bring a new law that will make the death penalty mandatory for those who rape minors, so that little girl's case becomes the last, Mehbooba wrote on Twitter. 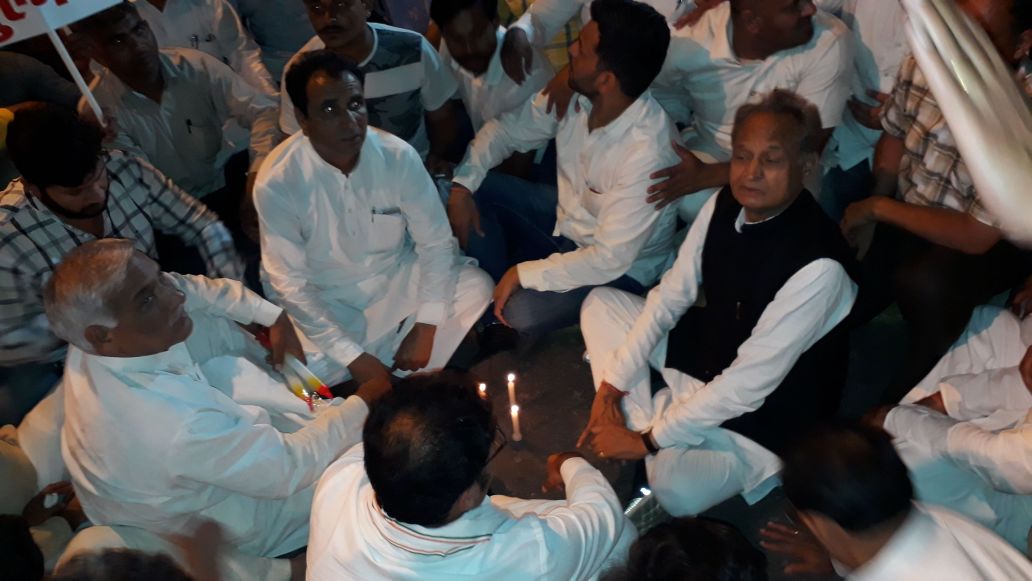 SLOGANS IN SILENT MARCH | The women and organisers constantly talking of it being a peaceful march. Slogans not allowed. Delhi Pradesh Congress Committee joins the march and many defy instructions to carry out a silent protest and shout political slogans against government. 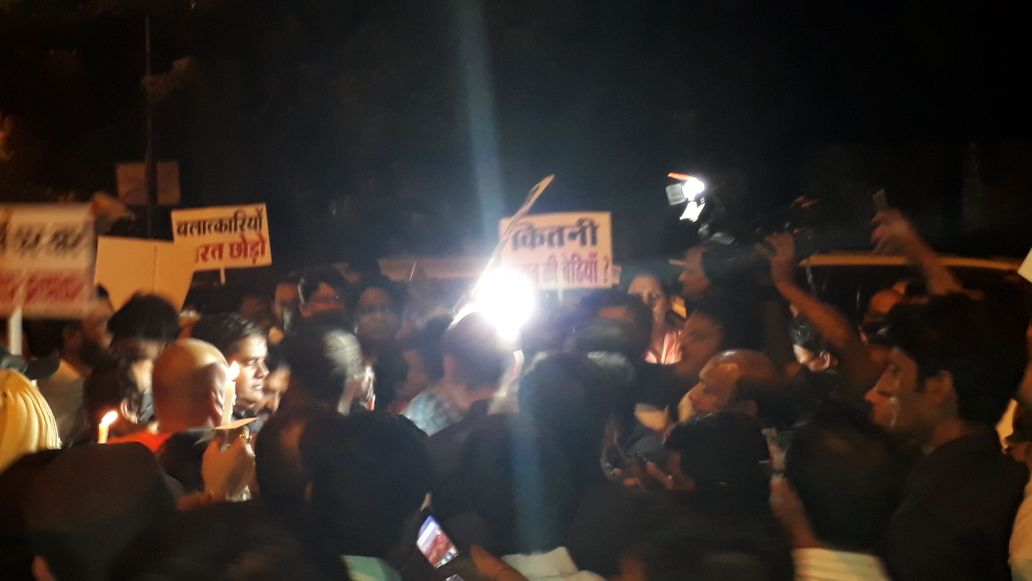 Actor Priyanka Chopra tweets: How many more children like baby ***** will be sacrificed at the intersect of religion & politics? how many more children will have to suffer unimaginable crimes before we wake up? I’m disgusted. it’s time for swift action. we owe it to asifa and to humanity. 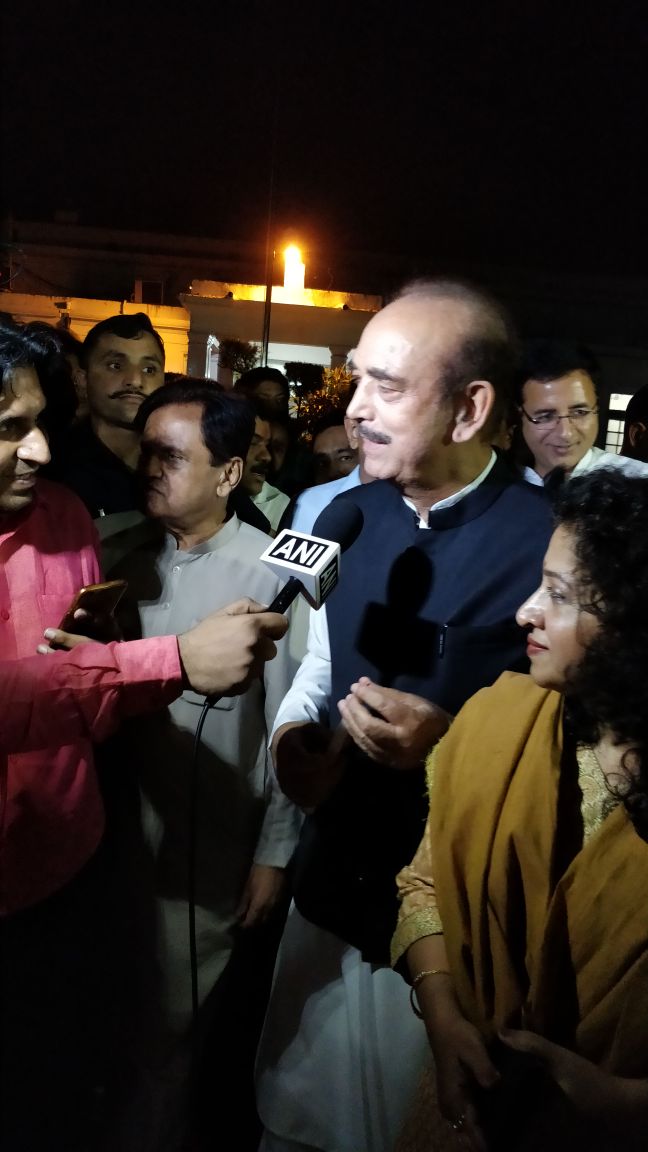 As shocking details from the chargesheet made their way to public discourse, politicians and celebrities took to social media, with Union minister VK Singh among the first to comment from the Centre.

While the Congress leaders present at the protest have been repeating each other's words saying this is not a political protest and it is "neutral" march of humanity, the gathering mostly consists of Congress workers, volunteers and supporters so far.