Home » News » India » Living Under Curfew: When Life Comes to a Halt in Kashmir
2-MIN READ

Living Under Curfew: When Life Comes to a Halt in Kashmir

Irked by the civic meltdown, the occupants of the valley say the curfew has impeded their routine. And as much as they wish the situation to revert, the numerous sieges, barbed wires, demarcations, paramilitary forces and shutters, are making it difficult for normalcy to prevail.

Twelve-year-old Ryan Ryaz recalls the exact number of days his school has been shut: “One month and 18 days, since Burhan died. We take private tuitions now”.

A resident of Khanyar in downtown Srinagar, the class VI student says life in the valley has been morose. Ryaz and many others now take private tuitions to complete their syllabus and gear up for the impending exams post curfew.

“My syllabus is incomplete, but exams will happen as per schedule, as per newspaper reports”, says Ryan.

Irked by the civic meltdown, the occupants of the valley say the curfew has impeded their routine. And as much as they wish the situation to revert, the numerous sieges, barbed wires, demarcations, paramilitary forces and shutters, are making it difficult for normalcy to prevail.

Speaking to News18, a local resident Ghulam Qadir says the shutters have been down for the last two months. “The CRPF insist they remain that way. We are making ends meet, when the shutters are up for half-an-hour or so. We keep getting reminded of the 60 people who died,” he says.

Around a kilometre from Khanyar, 40-year-old Qadir opens his automobile shop for half an hour. He used to make Rs 20,000 a month until recently; now he earns nothing.

Another local Iqbal, completed his MBA from an institute in Greater Noida. He returned to the valley three years ago, only to find looming hopelessness. “Kashmir is different from other states. It is normal to have a curfew for a day, but there is no resolution here. I lived outside (the state) for seven years. There are no government jobs; I had to return to support my family”. 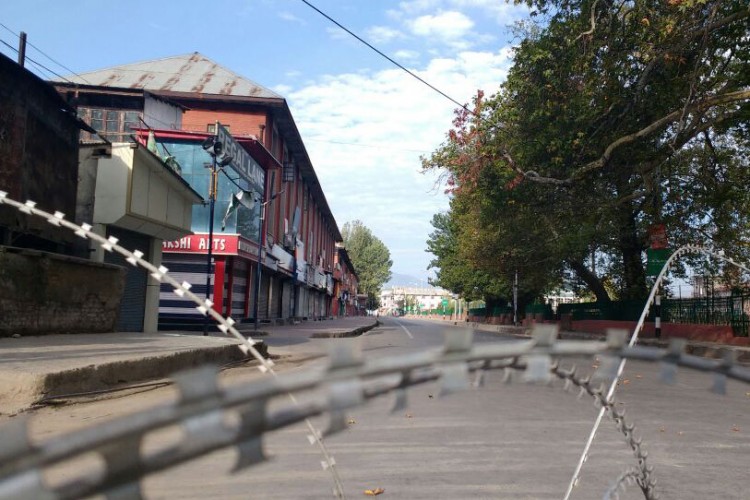 And what of the Prime Minister’s ambitious comments about Kashmir?

“He said children here should lift bat-ball and laptops instead of stones. But what about those who have been blinded and had their hands severed? It has impacted our economy. Those people were capable of achieving something,” Iqbal says.

Local Kashmiris say the unrest in the valley is palpable, and that the situation is unlikely to improve soon.

Conveniently oblivious to the tension, the children here exude hope. All they want, is to go back to their schools.

“I am studying at home — English, Urdu and Science. But I miss school, I wish to go back to studying Kashmiri and Computers,” Seven-year-old Shafiq, a local resident, says.

Living in gloom and under constant scrutiny is tough. The persistent presence of the CRPF has made Ryaz forget the life outside his home.

“When at home, I usually play games and study, as there is no internet,” he says. He longs for leisure outside his house.