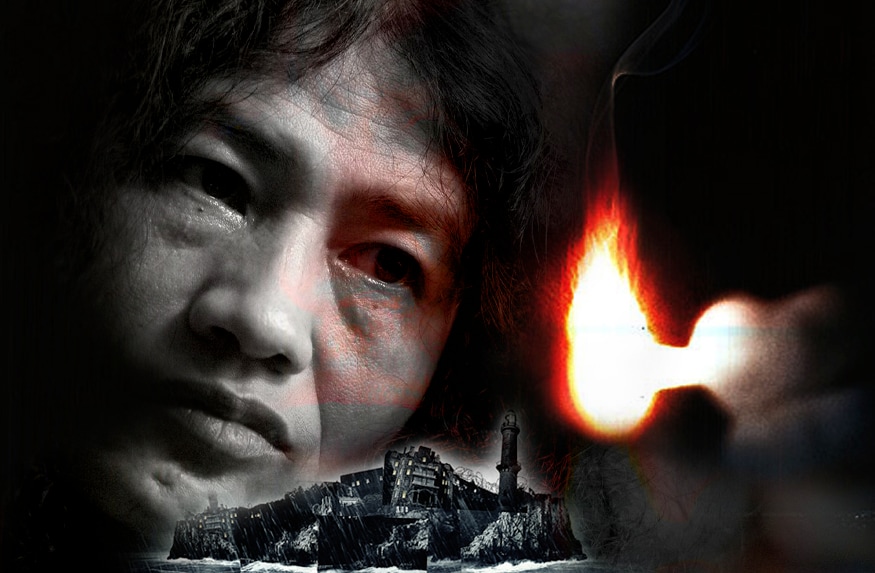 The ruling Congress finished as the single-largest party, but three short of a majority in a hung Manipur Assembly on Saturday, with the BJP, for the first time, emerging the second largest outfit in the northeastern state where smaller parties and an independent lawmaker now held the key to government formation.

This election goes far beyond the state level. Many factors played here. The credibility of PM Modi had a major role to play: Arun Jaitley

Results and trends from Manipur at 4pm 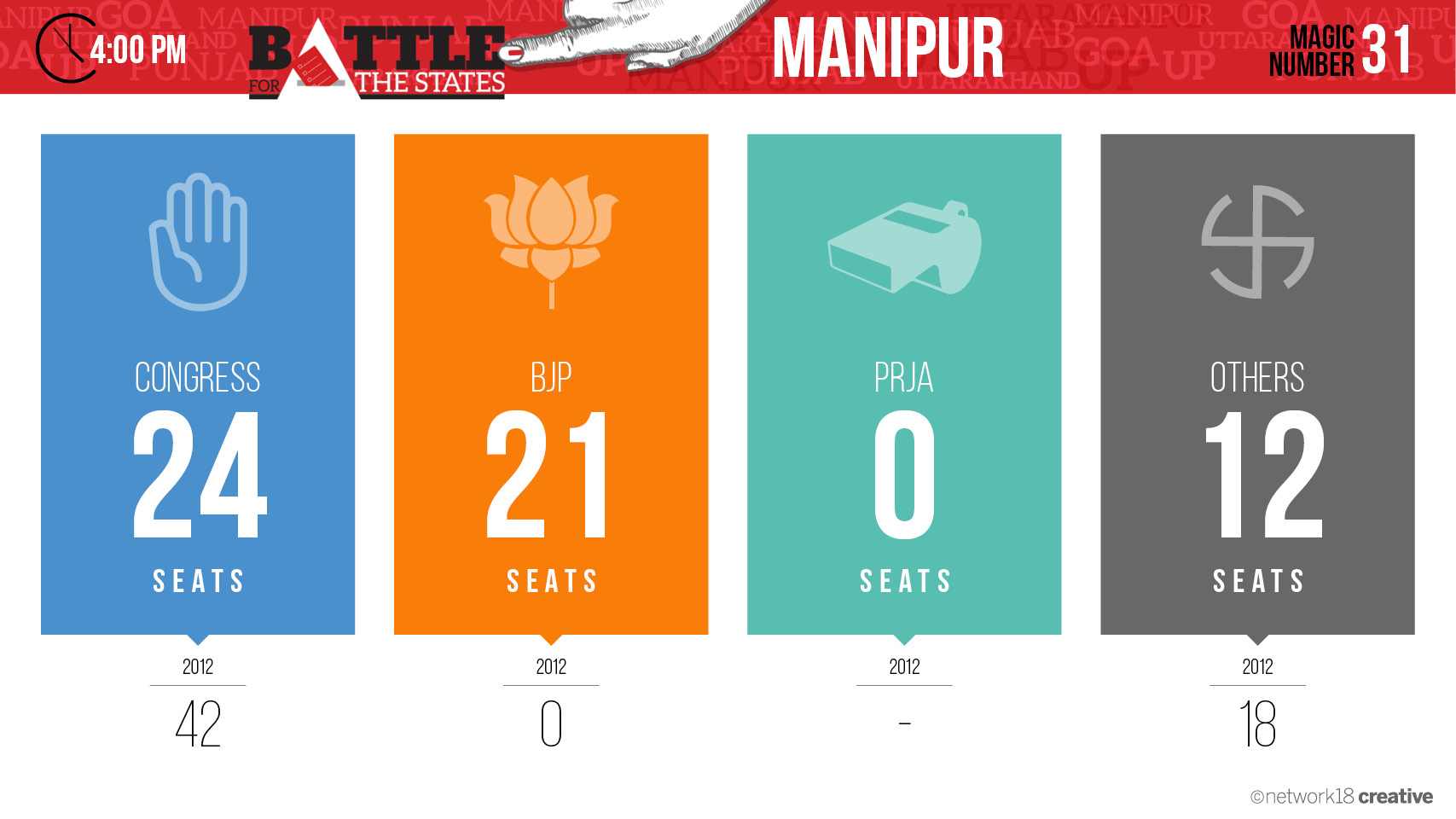 Amit Shah is now taking questions. The first and obvious one is on BSP chief Mayawati’s allegations of EVM tampering. “I can understand her situation,” he says

Amit Shah talks about Congress pocket-boroughs of Amethi and Rae Bareli, says the BJP has performed well in these Lok Sabha constituencies

I assure that we fulfil all promises we made in UP, Uttarakhand, Goa and Manipur: Amit Shah

We had maintained that India cannot reach double-digit growth till UP grows in double digits. The BJP will form government in UP, this will be possible now: Amit Shah

The result is a resounding reply to the Opposition which made personal attacks and accusations against the PM during campaigning, says Amit Shah

Amit Shah thanks party workers across the nation. In Uttar Pradesh and Uttarakhand, the BJP has secured almost three-fourth majority. In Goa and Manipur, we are comfortably placed to form the government. This is the people’s win, says Amit Shah

The results are encouraging for the BJP. Our party will form the governments in Uttar Pradesh, Goa, Uttarakhand and Manipur. We lost in Punjab but our alliance with the Akali Dal won 30% votes, says Amit Shah

Manipur results and leads at 3pm

Trends from Manipur at 2:30pm 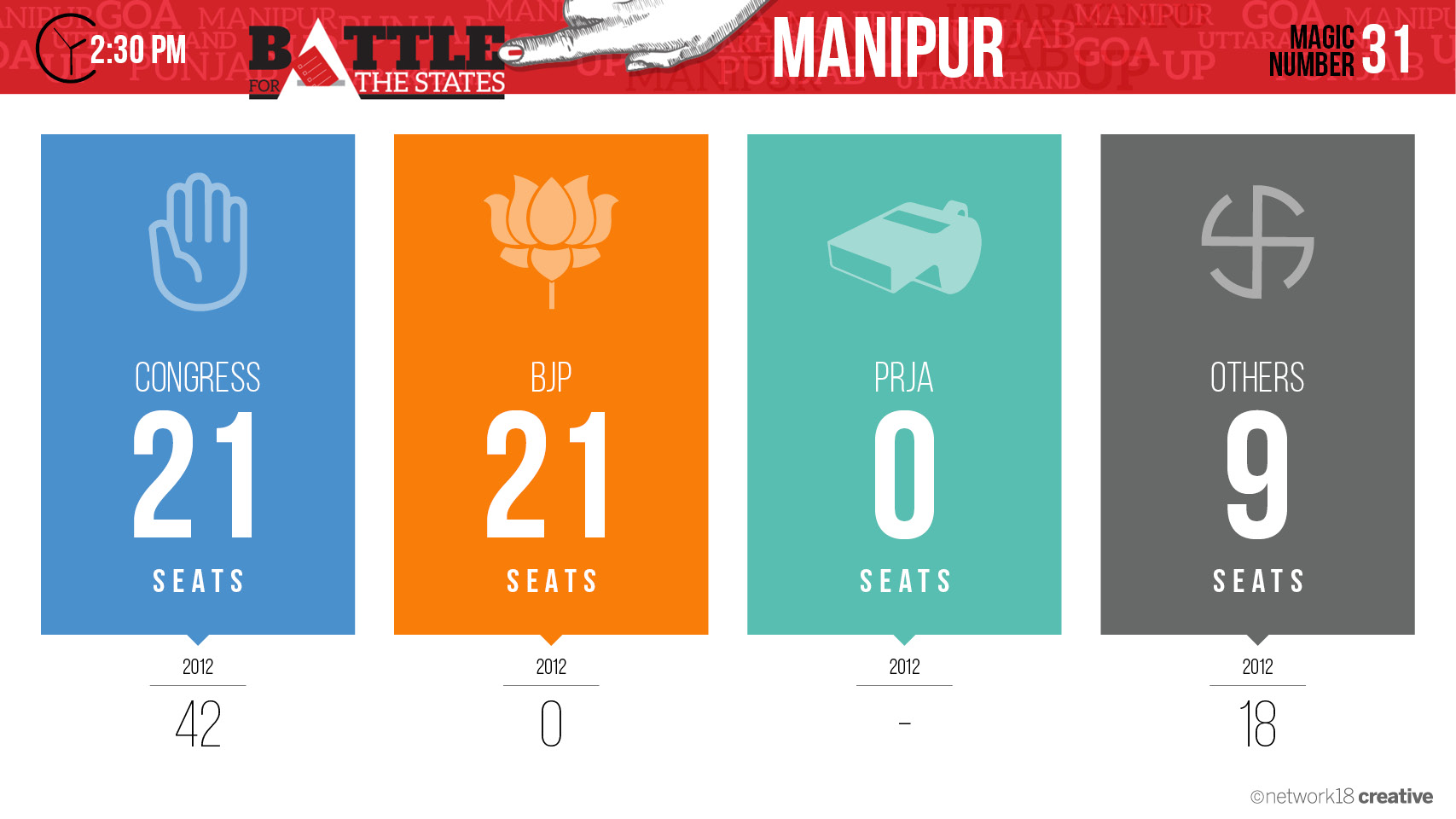 QUICK RECAP | The BJP is headed for a stunning victory in Uttar Pradesh and Uttarakhand and is locked in a close contest in Goa and Manipur with the Congress. The latter has won Punjab where it was certain to form the government. Celebrations are underway outside BJP offices in Lucknow and Dehradun. BSP chief Mayawati has accused the saffron party of tampering with EMVs. She has written to the Election Commission, demanding repolling on ballot papers

Trends from Manipur at 1pm 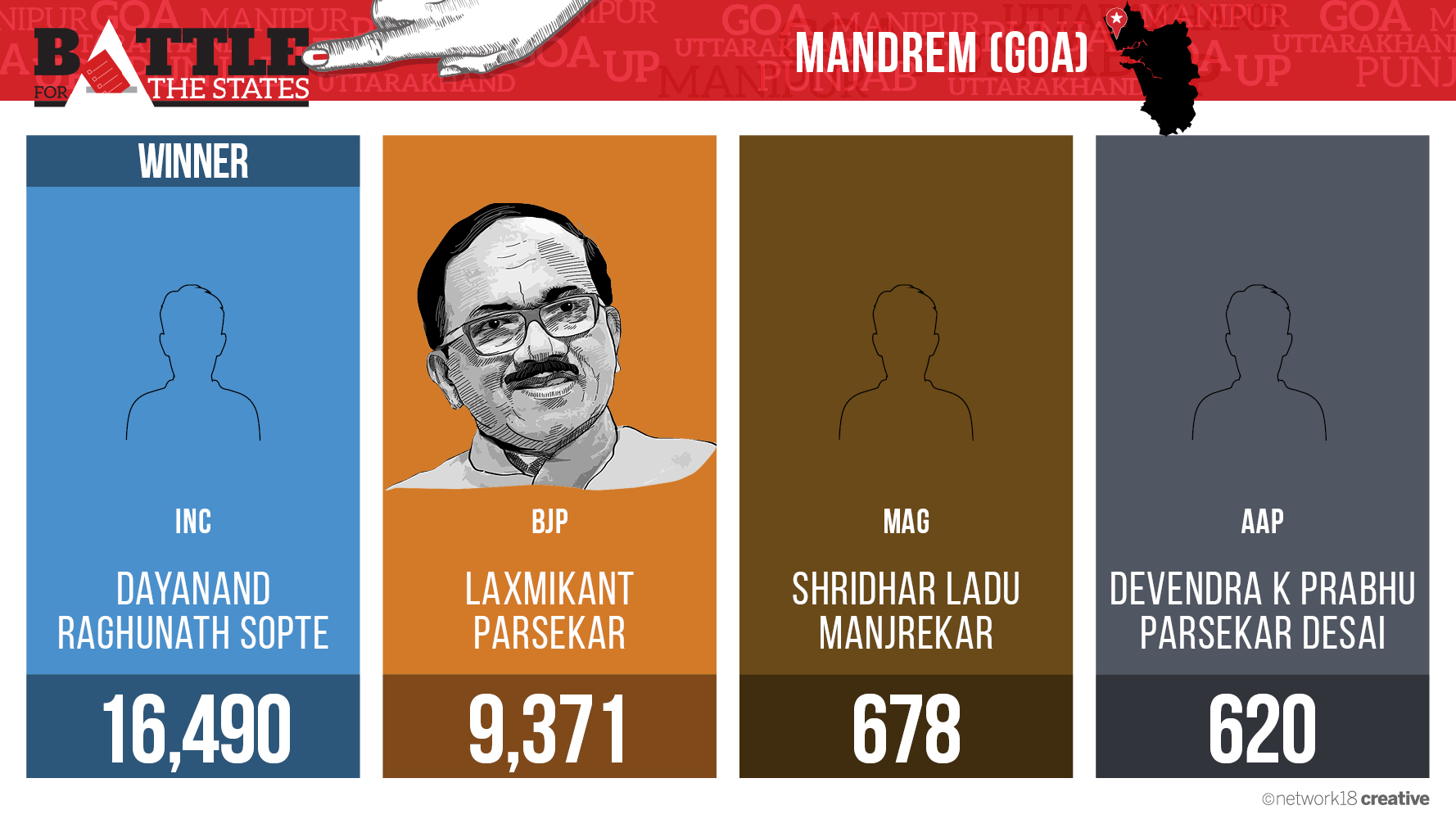 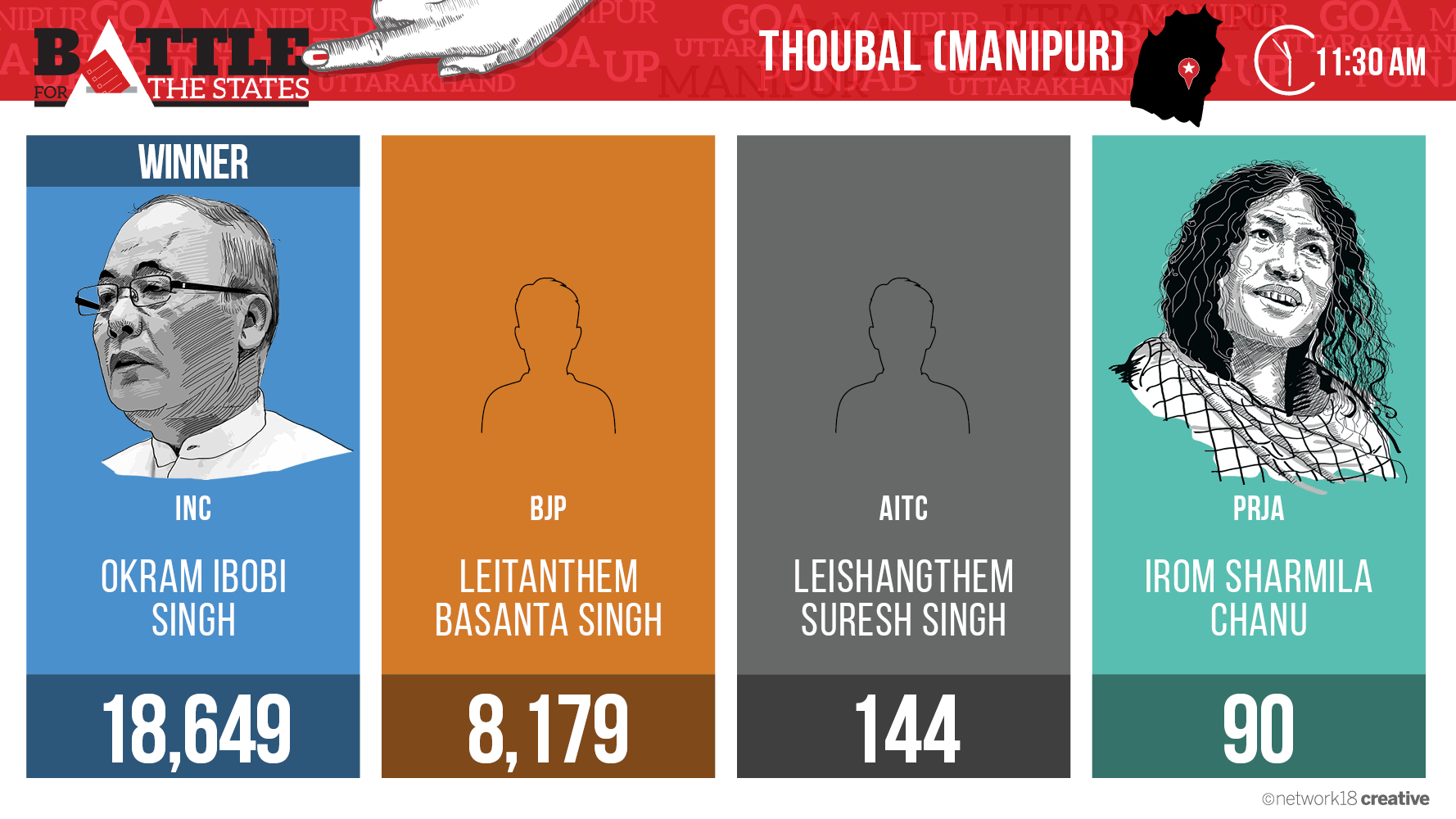 Trends from Manipur at 11:30am 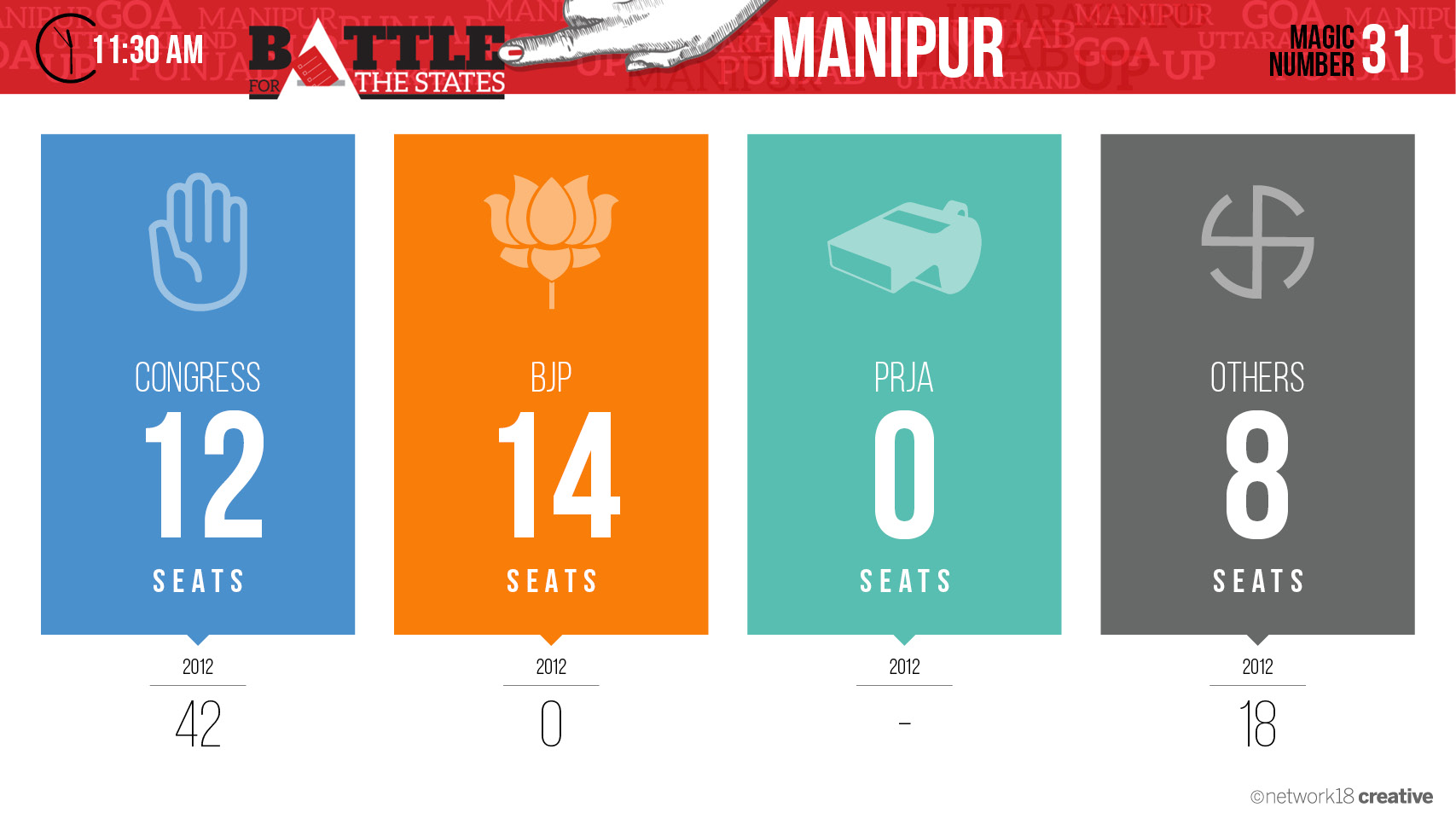 Trends from Manipur at 10am 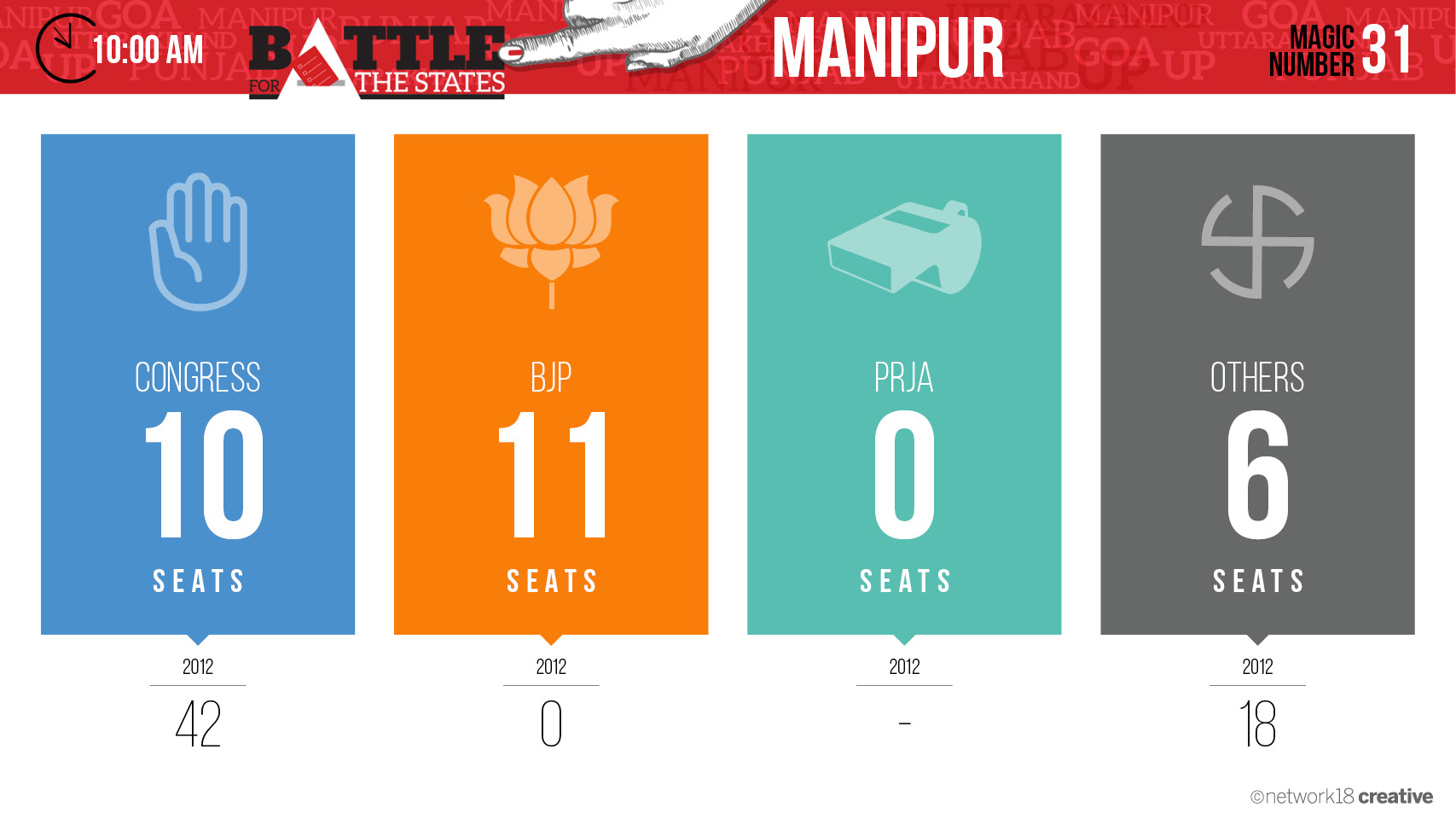 No clear trend in Manipur so far but trends suggest a neck-and-neck between the BJP and the Congress. In the last three Assembly elections, the BJP won zero seats. This is also the first time that the BJP has contested all 60 seats. In the run-up to the elections, six Congress MLAs quit had to join the BJP

Trends from Manipur at 9:30am 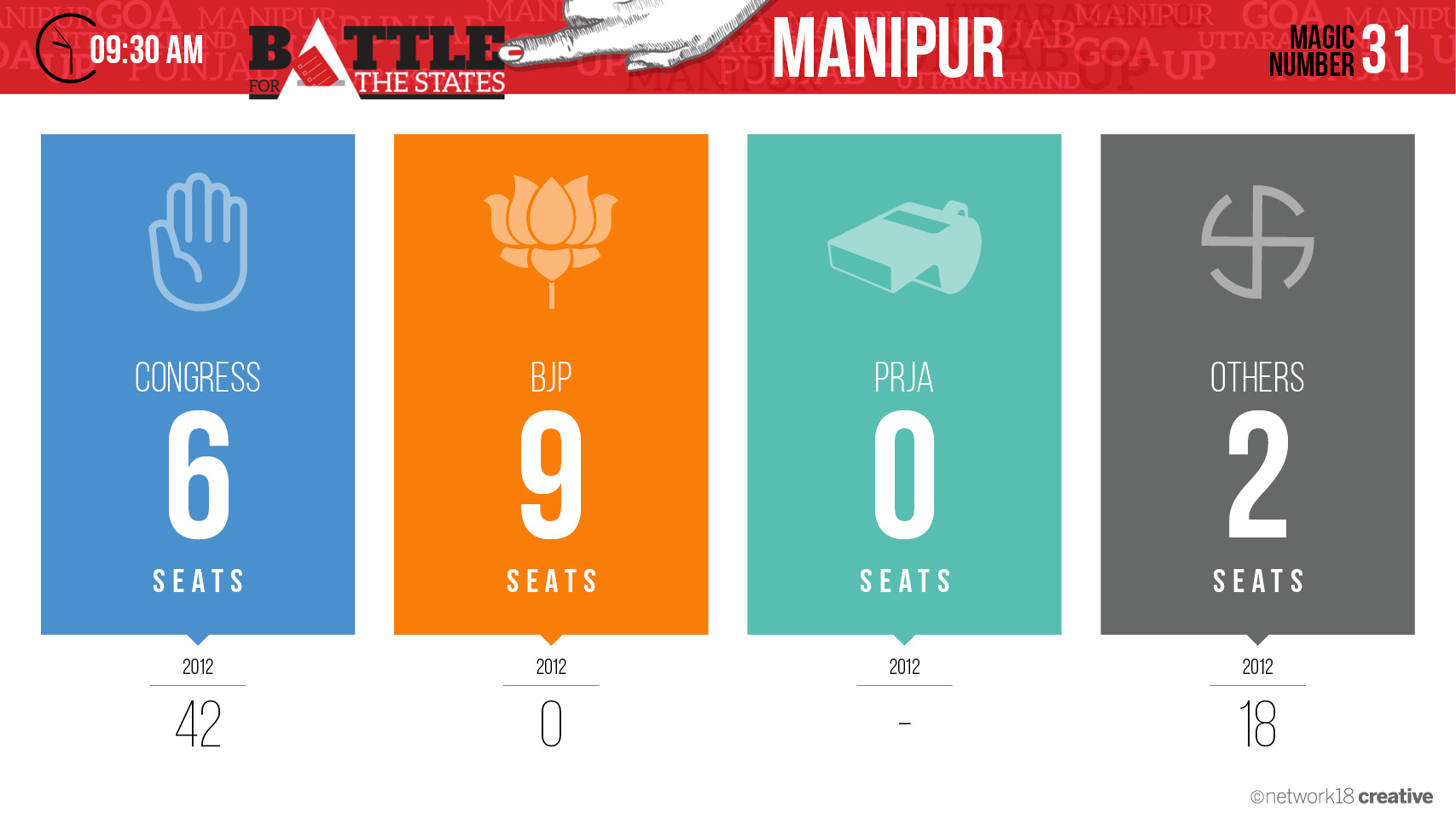 9:31 am (IST)
Manipur update | The BJP is now leading in Manipur, the first time since counting started. It is leading on nine seats and the Congress on six

9:21 am (IST)
Candidate Watch | NOTA (None of the Above) is higher than Irom Sharmila after first phase of counting in Thoubal constituency

Trends from Manipur at 9am 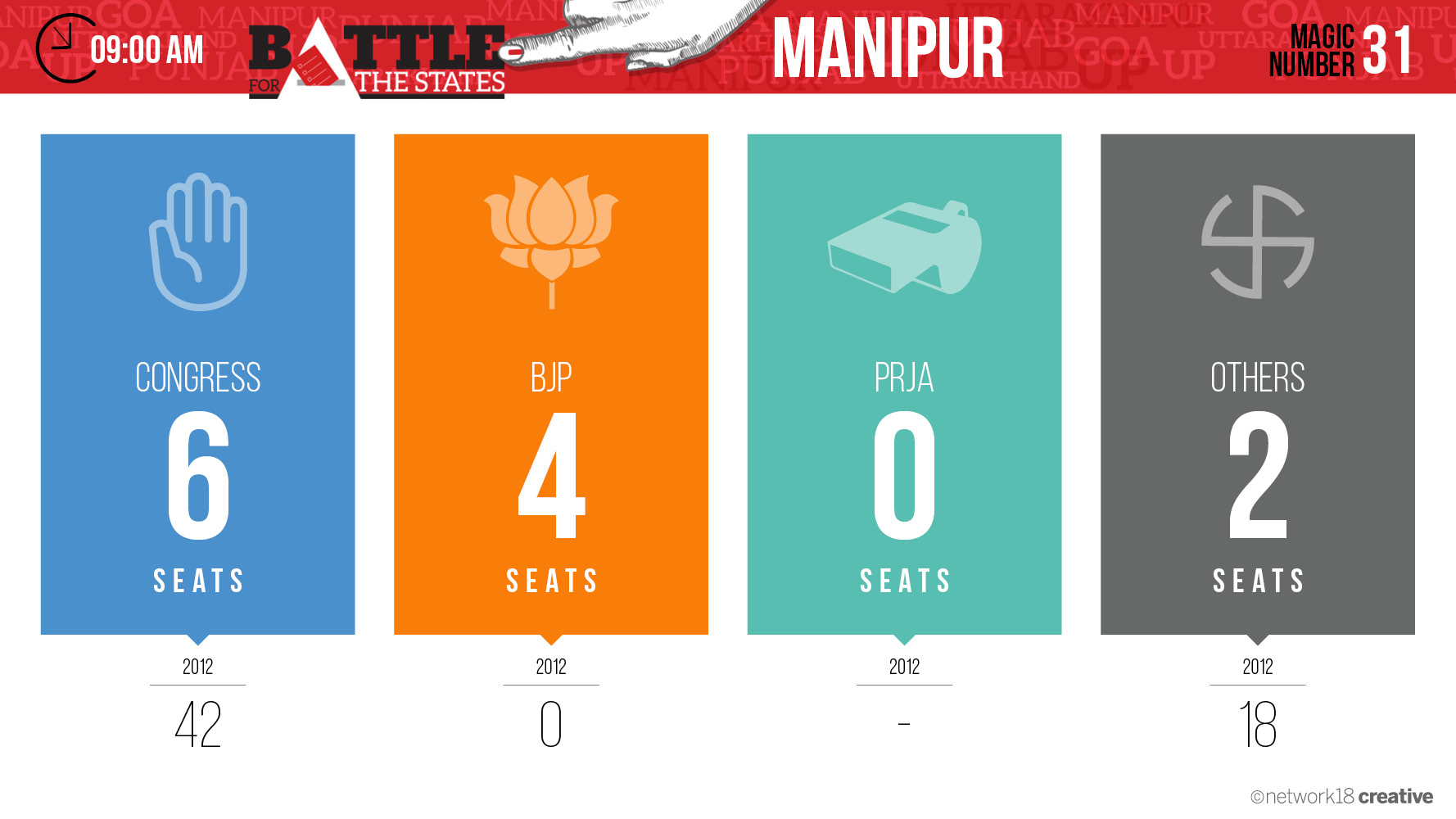 9:09 am (IST)
Candidate Watch | Manipur deputy CM Gaikhangam Gangmei of Congress leading in Nungba. Both the CM and the deputy CM are leading in the state now 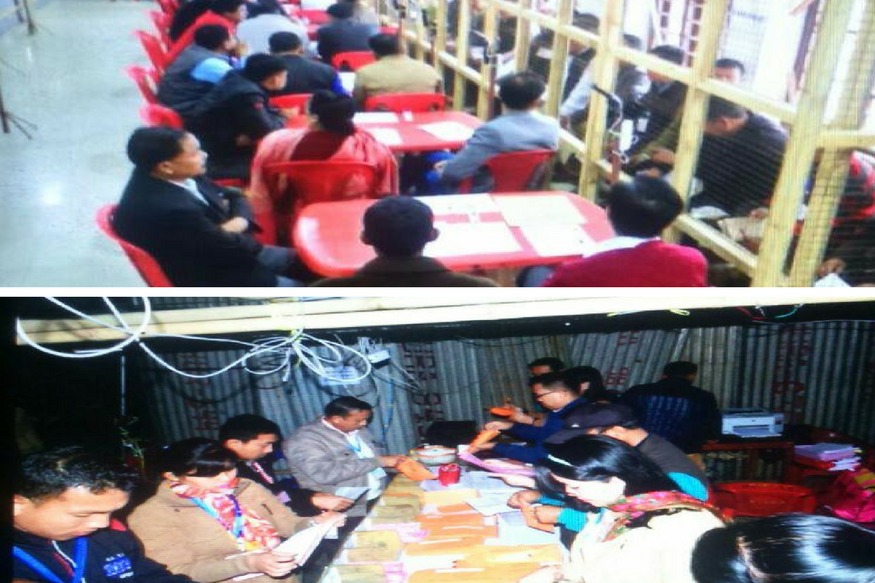 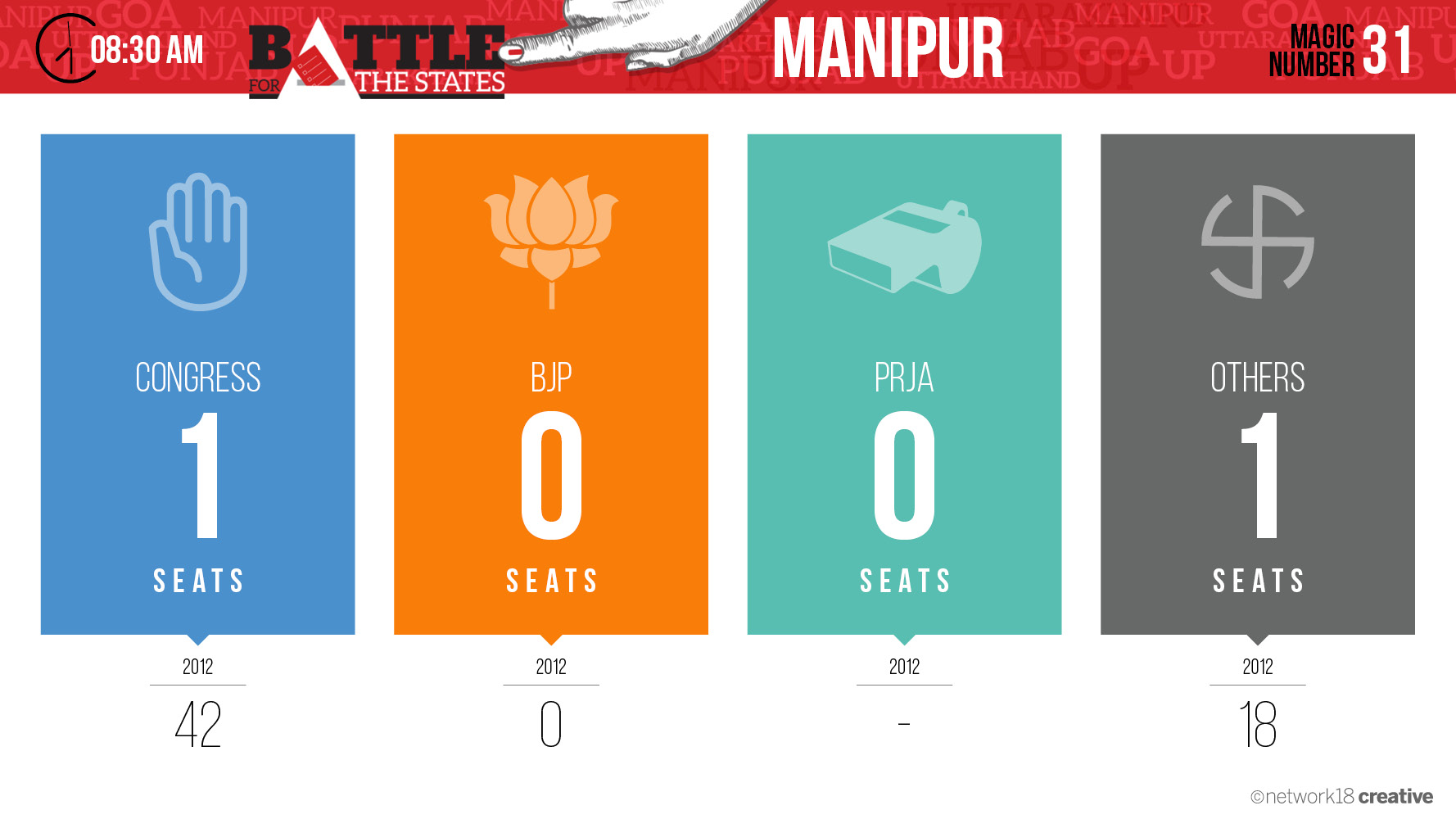 Candidate Watch | Anti-AFSPA activist Irom Sharmila trailing Chief Minister Ibobi Singh in Thoubal. The activist-turned-politician and her newly formed party PRJA has put up a fight, but mobilisation on the ground has been scanty. Sharmila’s prime cause of AFSPA repeal has also found few takers

The mood at Congress headquarters in New Delhi. (Chandan Singh/Network18) 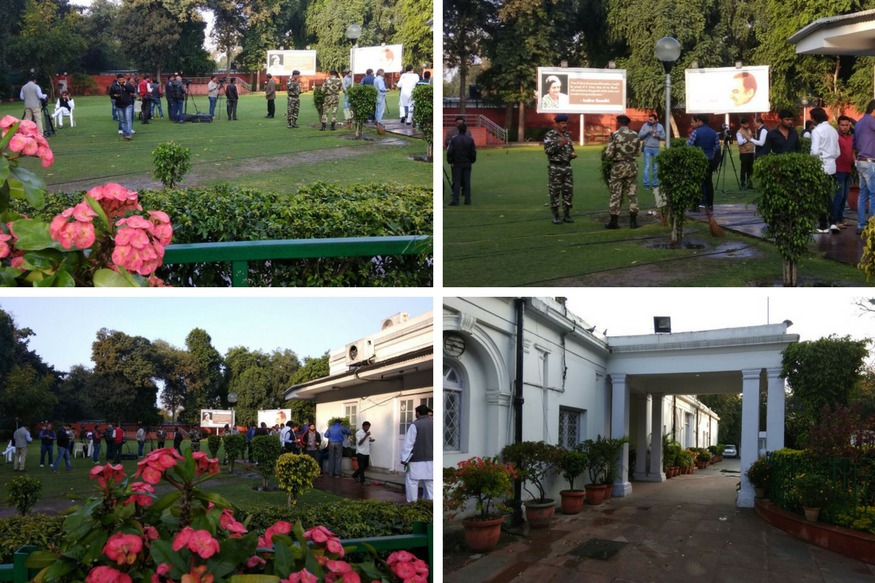 Counting for Assembly Elections 2017 will begin at 8am. Trends of the election results are likely expected by noon

It’s raining in Manipur where tight security arrangements have been made for counting day. Here’s a look at a counting centre in Thoubal, the constituency of incumbent CM Ibobi Singh. (Subhajit Sengupta/News18) 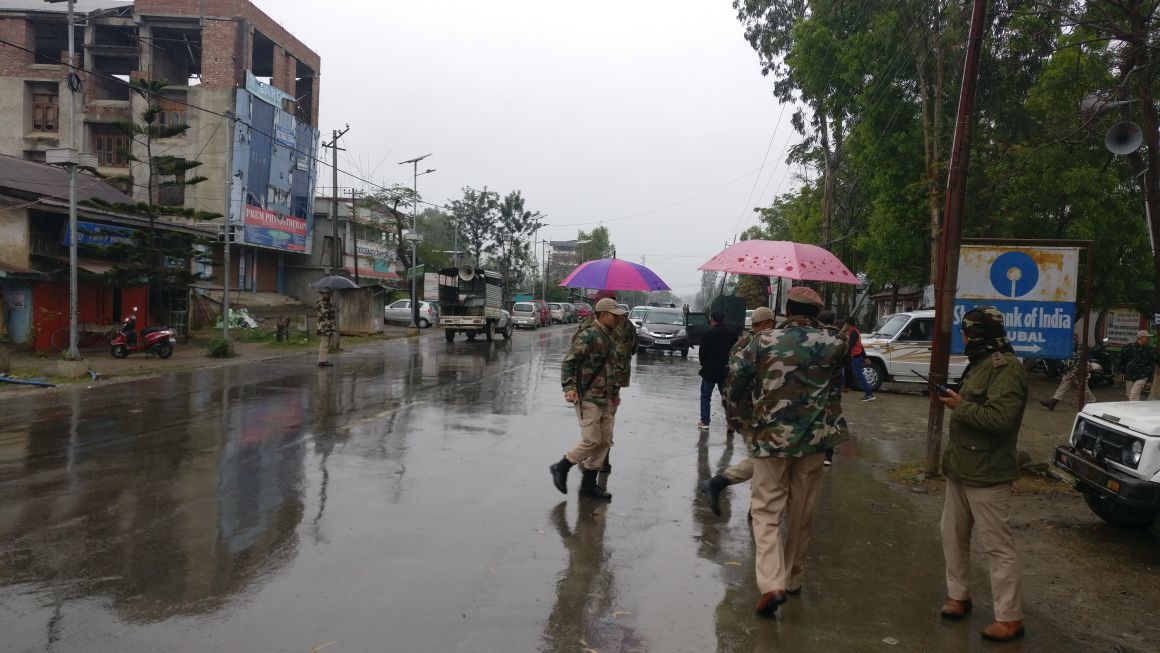 The Congress will have to sweep the Imphal Valley to hold on to power in Manipur. The BJP, meanwhile, will hope for seats from both the hill and the valley, reports CNN-News18’s Subhajit Sengupta

In Manipur, all eyes will be on the Thoubal constituency which witnessed an epic contest between three-time CM Okram Ibobi Singh and anti-AFSPA activist Irom Sharmila

Elaborate security arrangements have been made in the five states. The Election Commission has barred the use of mobile phones at counting centres

The last month-and-a-half have seen bitter campaigning and robust polling in Uttar Pradesh, Punjab, Uttarakhand, Goa and Manipur. The fates of the candidates will be known today when officials of the Election Commission unbox EVMs to count the votes. Counting is set to begin at 8am