Polling for the second and last phase of assembly elections in Manipur began at 7 am on Saturday in 22 constituencies across six districts, an official said. A total of 8.38 lakh voters are eligible to exercise their franchise in this phase in the districts of Thoubal, Chandel, Ukhrul, Senapati, Tamenglong and Jiribam, he said.

The turnout in the second and the final phase of Manipur assembly polls on Saturday was recorded at 76.04 per cent amid stray incidents of violence in some places before and after voting, election department officials said. Voting was held in 22 constituencies across six districts amid tight security and strict adherence to Covid-19 protocols. Senapati district, where polling was held in three assembly constituencies registered the highest turnout of 82.02 per cent followed by Thoubal district at 78 per cent. Thoubal has 10 constituencies, the officials said. Ukhrul and Chandel districts which have three constituencies registered 71.57 and 76.71 per cent respectively while Tamenglong with three constituencies registered the least turn out with 66.40 per cent. Jiribam, the smallest district with only one constituency recorded 75.02 per cent polling. Polling was marred by violence in some places, as security forces deployed at Ngamju polling station in Karong assembly constituency in Senapati district allegedly shot at two people, the police said. PTI

Violence erupted in some places of Manipur hours before the second phase of assembly polls began on Saturday, as a BJP supporter was gunned down allegedly by a Congress worker, while a crude bomb exploded outside the residence of an expelled saffron party leader, police said. L Amuba Singh, 25, succumbed to bullet injuries early on Saturday at a hospital here, a police officer said. Polling for the second and last phase of assembly elections in Manipur began at 7 am in 22 constituencies across six districts.

Manipur recorded 11.40 percent voters turnout till 9 am in the second phase of Manipur Elections 2022.

BJP candidate from Heirok assembly seat Thokchom Radheshyam Singh believes that he will win the election by a minimum of 5,000 votes. “Polls will decide future of Manipur. I’ll win by a margin of at least 5000 votes,” retired IPS officer added after voting. Today is the second phase of the Manipur Assembly elections. Calling upon all those whose constituencies are polling today to vote in large numbers and mark the festival of democracy.

Congress leader Okram Ibobi Singh claimed that his party’s performance in the second phase will be overwhelming and better than 2017. He claimed that Congress will get single party majority in this elections and perform better in the Hill districts.

Former Manipur CM and Congress leader Okram Ibobi Singh casts his vote after a brief delay at the polling station due to a technical error. “They said that there is some technical error,” says Singh who is contesting from Thoubal Assembly seat. 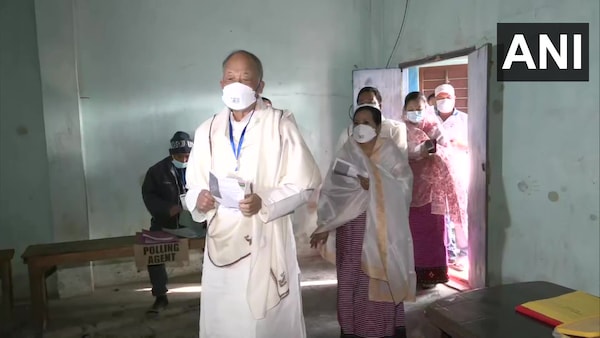 Polling for the last phase of Manipur Elections is underway. Voters stand in queues while maintaining social distancing amid Covid-19 pandemic. Picture of voting from Parlon. 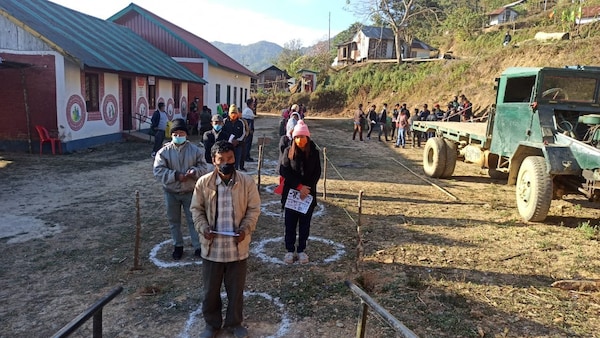 The Election Commission had ordered repolling on Saturday in 12 polling stations in five Assembly seats that went to the poll on February 28 in the first phase. The repolling will take place along with the polling in second phase in 22 constituencies. Of these polling stations, one is in the Imphal valley—Sarouthel in the Khundrakpam constituency—and the remaining are in the hill districts of Churachandpur (10) and Kangpokpi (1).

The second phase of voting in Manipur began at 7 am today. Voting has started across 22 assembly constituencies and will go on till 4pm. The last hour of voting, between 3-4 pm will be reserved for Covid-19 patients.

On this second phase of Manipur Assembly Election 2022 happening today in 22 seats, I urge all the voters in these constituencies to turn out in large number and vote to secure a peaceful & developed Manipur.

Manipur Elections: Key Contest in Thoubal, All You Need to Know

Veteran Congress leader Okram Ibobi Singh is seeking another term from this seat which he has won since the 2007 election. Singh also served as the Manipur CM from 2002 to 2017 and ensured that Congress was the single largest party in the Assembly in the previous election. In the 2017 polls, he contested against activist Irom Sharmila who was considered as a strong contender in Thoubal. This time, he is facing BJP’s Leitanthem Basanta Singh, JD(U)’s Irom Chaoba Singh and Shiv Sena’s Konsam Michael Singh.

Of the 60 assembly seats in Manipur, in 2017, the Congress got 28 and the Bharatiya Janata Party 21. The BJP managed to strike up alliances, got support from the National People’s Party (NPP) and Naga People’s Front (NPF), and formed the government under chief minister N Biren Singh, a former journalist and footballer. As the state votes on March 5 for second phase, who will the voters pick? READ MORE

Manipur registered a record voter turn out of 88.63 per cent out of a total of 12.09 lakh registered voters for the first phase of the state legislative Assembly elections for 38 assembly segments, a statement issued by the Chief Electoral Officer said, Female voter turnout at 89.96 per cent outnumbered male turnout recorded at 87.29 pc. Women “displayed more enthusiasm” the CEO said. Some 176 wheelchairs were also booked by physically disabled voters using IT applications. This and other measures saw 97 per cent of voters who are 100 years old and above exercising their franchise.

As per the chief electoral officer, a total of 8.38 lakh voters are eligible to vote in this phase in the districts of Thoubal, Chandel, Ukhrul, Senapati, Tamenglong, and Jiribam. The BJP has fielded 22 candidates, followed by Congress (18), National People’s Party (11), Janata Dal (United), and Naga People’s Front (10 each). Altogether 12 Independents and nominees of Shiv Sena, NCP, CPI, and several other parties are also contesting. Out of 92 candidates, 17 have criminal antecedents. Agarwal said that 223 polling stations will be manned completely by women polling personnel.

Second Phase of Voting Today; 92 Candidates in Fray for 22 Seats

Manipur will decide the electoral fate of 92 candidates in 22 constituencies across six districts by voting in the second and last phase of assembly elections today. Chief Electoral Officer (CEO) Rajesh Agarwal said all arrangements are in place to hold the voting in 1,247 polling stations. The voting will begin at 7 am and to continue till 4 pm.

Manipur Elections: Key Contest in Thoubal, All You Need to Know

Second Phase of Voting Today; 92 Candidates in Fray for 22 Seats

All arrangements are in place to hold voting in 1,247 polling stations adhering to COVID-19 safety protocols, Chief Electoral Officer (CEO) Rajesh Agarwal had said on Friday. The electoral fate of 92 candidates will be decided on Saturday, including 12 from the BJP, followed by Congress (18), National People’s Party (11), Janata Dal (United) and Naga People’s Front (10 each). Polling will continue till 4 pm.

Former three-time chief minister Okram Ibobi Singh and ex-deputy chief minister Gaikhangam Gangmei are among 92 candidates in the fray as Manipur votes in the second and final phase of assembly elections in 22 constituencies across six districts today. All arrangements to hold the voting in 1247 polling stations adhering to the Covid-19 safety protocols have been completed, Chief Electoral Officer (CEO) Rajesh Agarwal has said. A total of 8.38 lakh voters are eligible to exercise their franchise in this phase in the districts of Thoubal, Chandel, Ukhrul, Senapati, Tamenglong and Jiribam, the CEO said. The BJP has fielded 22 candidates, followed by Congress (18), National People’s Party (11), Janata Dal (United) and Naga People’s Front (10 each). Altogether 12 Independents and nominees of Shiv Sena, NCP, CPI and several other parties are also contesting.

Of the 92 candidates, 17 have criminal antecedents, Agarwal said. He said that 223 polling stations will be manned completely by women polling personnel. Arrangements for webcasting or videography have been made in all polling stations while adequate central forces have been deployed.

The first phase of voting held on February 28 was marred by stray incidents of violence and repoll was ordered in 12 polling stations in three districts – Churachandpur, Kangpokpi and Imphal East. Repoll in these areas where EVMs were damaged by miscreants will also take place on Saturday, the CEO said. Agarwal said that polling stations were sanitised while circles were drawn in polling stations for voters to stand in queues to avoid crowding to ensure COVID safe election.

“Besides, mask, glove, face shield, thermal scanners, PPE kit have been provided to polling parties. Voters who are COVID positive or are under quarantine will be allowed to vote at the last hour between 3 pm to 4 pm,” he said. Mobile phones are not allowed except for officials on duty within 100 meters of a polling station. Meanwhile, the High Court of Manipur has directed that all voters in the vicinity of 18 years in Heirok constituency of Thoubal district will have to produce two separate documents of proof of date of birth at the polling station. Separate verification counters shall be set up in all polling stations in that constituency so that no inconvenience is caused to other voters.

According to the Association for Democratic Reforms, Manipur Chief Minister N Biren Singh got poorer by over Rs 4 lakh since 2017, while the assets of his deputy, Yumnam Joykumar Singh, nearly doubled during the same period. The Chief Minister’s assets dropped from Rs 1.52 crore in 2017 to Rs 1.47 crore in 2022. On the other hand, the assets of his deputy increased from Rs 2.29 crore to Rs 5.05 crore during the same period, the report said.