The minor girl after being rescued by the residents of Kanishka Towers in Faridabad. (News18)

Residents of Kanishka Towers in Faridabad, who rescued the girl on Wednesday said, there were burn and injury marks all over her body and that they would often hear cries from the 11th floor flat.

New Delhi/Faridabad: A 13-year-old girl on Wednesday attempted suicide by jumping off the 11th floor of a building in Faridabad, in order to escape slavery and torture that she endured for two years.

The minor victim, who hails from Bihar, was caught in a bird net on the 10th floor balcony and was rescued after several hours of being stuck.

Police have booked a 23-year-old woman, who had allegedly kept the minor girl under captivity. SHO Balbir Singh of Sarai Thana, Faridabad said, "An FIR has been lodged against a 23-year-old. Sections of the Juvenile Justice Act has been invoked and we will start an investigation soon."

Residents of Kanishka Towers in Faridabad, who rescued the girl on Wednesday, said there were burn and injury marks all over her body and that they would often hear cries from the 11th floor flat.

The shocking incident of slavery and child labour came to light only after the minor victim went through several months of torture and abuse at the hands of a woman who had locked her up in the apartment for two years, police said.

The accused never allowed the girl to step out of the house. Locals said it looked like she has been starved for quite some time.

Cases of minors kept as domestic help should be strongly denounced. I urge all to come forth against #childlabour. https://t.co/LGCoJhE5Gf

"We would often hear cries. But the woman, who told us that she studies at a private university, would tell us to mind our own business," said a neighbour at Kanishka Towers.

"On Wednesday morning, the victim jumped off the 11th floor apartment and got stuck in a bird net of balcony on the 10th floor, which is vacant. The girl was stuck there till around 4.30 pm when the owner of the flat at ninth floor, a school teacher, heard her cries," said Roobesh, another resident of Kanishka Towers.

The residents then called the police and Shakti Vahini, a local NGO working against urban slavery.

"The victim has burn marks all over her back, she has bruises on her head and her hands have deep marks that appear old. The girl is extremely scared and is in a traumatic condition. Doctors say she has been starved for long," said Rishi Kant, spokesperson of Shakti Vahini.

The victim was presented before the chairperson of the Child Welfare Committee, Faridabad, HS Malik. He has asked the victim to be kept at a child protection centre.

However, according to the police, residents of the building were in a state of panic and gave contradictory statements. 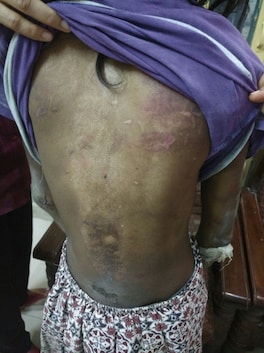 News18 also spoke to HS Malik, who said that the accused's family appears to have known the victim's family from Patna.

"The accused is a student a private university in Faridabad. She used to beat up the girl regularly. Both the girls hail from Patna and the parents of the victim work as servants at the accused girl’s home in Bihar," Malik said.

"I have given directions to invoke specific provisions of bonded labour and child labour in this case. Even provisions of the Juvenile Justice Act will be invoked. She might have made attempts earlier to run away, but was unsuccessful," Malik added.

News18 also got in touch with the National Commission For Protection of Child Rights (NCPCR), which is going to take it up with the district magistrate.

“We are looking into the incident and if we see a lacuna in the process, we will intervene. We will intimidate the district magistrate and make sure that the girl is compensated and given medical attention. We are speaking to the chairperson of the child welfare committee to understand how the case is proceeding,” said Yashwant Jain, Member Child Labour, Laws related to children at NCPCR.