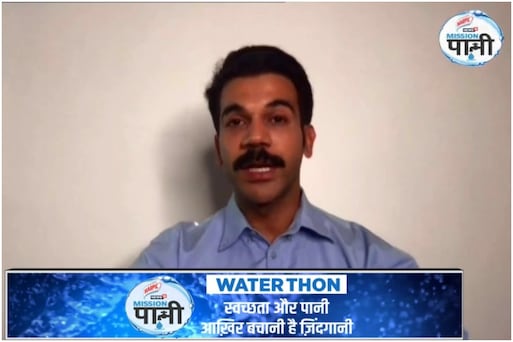 Excessive migration from the village to the city must stop. The land in villages must be made worthwhile...Do you think we have space for migration of millions to big cities?: Sadhguru Culminating a successful edition of Mission Paani Waterthon, a first-of-its-kind initiative by Network18 and Harpic India to highlight the need for water conservation in the country, union ministers…

Influencing social change. The need to conserve water is supremely important for us now. The waterthon on @CNNnews18 was so fruitful today #MissionPaani https://t.co/cX3GhMcf4Y

Meghali Malbika, India's Google girl says, "Me and my brother, we take short showers; closing the tap when we brush. Every year, my father and I plant a 100 trees."

Meghali Malbika, India's Google girl on how she conserves water: Me and my brother, we take short showers; closing the tap when we brush. Every year, my father and I plant a 100 trees. #MissionPaani @harpic_india #MeriJalPratigya https://t.co/GiIcDw3kWb

"Let's save water. Let's be very careful and cautious before it gets too late. Film is an important medium to spread this message and I will be happy to be part of this," says actor Rajkumar Rao.

I appeal to our countrymen to save water and I hope @Network18Group initiative of MissionPaani will make viewers understand the importance of conserve water : Union Home Minister Amit Shah ( @AmitShah )#MeriJalPratigya @harpic_india https://t.co/golU4nE0Bp pic.twitter.com/FINt6PkrNb

"Water will always remain essential in our lives, and I appeal to the people of UP to take the pledge to conserve water," says Yogi Adityanath.

"Water will always remain essential in our lives, and I appeal to the people of UP to take the pledge to conserve water," says Uttar Pradesh CM @myogiadityanath during @harpic_india-News18 #MissionPaani Waterthon.#MeriJalPratigya pic.twitter.com/dnFuoRVMha

Results of this endeavour were seen during the Kumbh Mela held in 2019 as devotees were able to take a dip in clean waters of the holy Ganga. For Namami Gange to be successful, the most critical point from Gangotri to Ganga Sagar is Kanpur, and we have taken steps like stopping the flow of sewage water and closing down polluting units. Now, we can even see dolphins in the Ganga River: Yogi Adityanath

The Prime Minister has through the medium of Namami Gange project taken the pledge to clean the holy Ganga River. UP also has to take responsibility in this effort as the most of the river water flows through the state, and the state government has implemented this project with full vigour: Yogi Adityanath

Mission Paani will have a positive impact on water conservation in India and is also in line with Indian government'sa vision to conserve water. I wholeheartedly congratulate the Mission Paani team for making this possible: Amit Shah

When I used to be the Coal Minister we had started processing the water to distribute it to villages. It was expensive to process it but we took this decision. We made it so pure that we even made bottled drinking water with it. There's no space for rain water harvesting in the railway stations that we have, but perhaps we will do something like that in the future in new rail stations: Piyush Goyal Mira Kapoor, Mini Mathur and Kusha Kapila joined Network18's initiative Mission Paani Waterthon to spread awareness about the looming water crisis and how the world has to be prepared to deal with it.

"We are fousing on Rain Water Harvesting in our state, this will help us in conservation," says Uttrakhand CM, Trivendra Singh Rawat

We are fousing on Rain Water Harvesting in our state, this will help us in conservation: Uttrakhand CM, Trivendra Singh Rawat (@tsrawatbjp) @harpic_india| #MeriJalPratigya

Children are the stakeholders of our future and as parents, it's our responsibility to inculcate habits of conservation nd preservation of nature, water and the earth: Mira Kapoor

Our ancestors realised the importance of water. India is blessed with its geography. Some lucky nations have 2 or 3 river systems, India has 7-- most of them major river systems. The Mahanadi river systems carries more water than the Nile. We receive most of our water supply during three months of monsoon. Our ancestors realised our entire way of live depends on how we manage this water that we receive in these three months. We have sadly lost that art: Amish Tripathi "We have such a beautiful coastline in India. We should all try to bring awareness to people to not dump waste in the water," says sand artist Sudarshan Pattnaik. Here's his artwork commemorating the Mission Paani campaign: 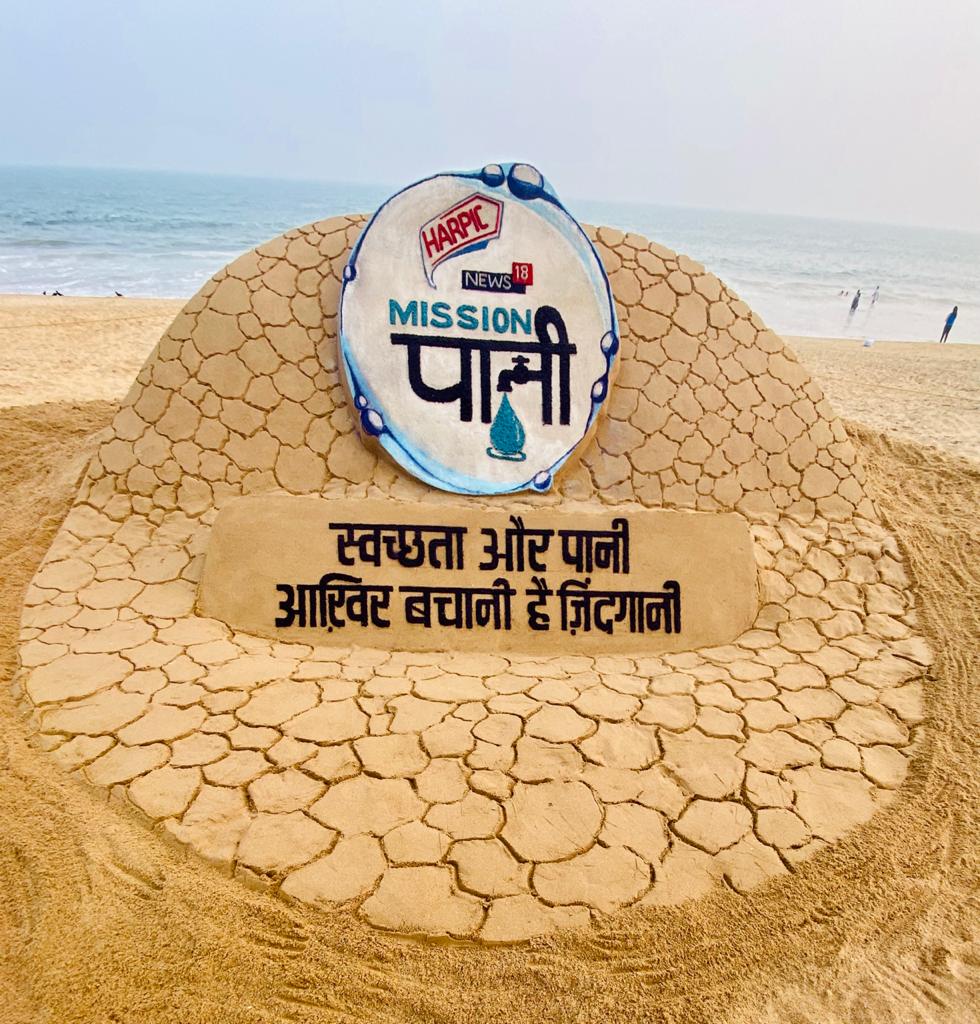 "I want the Conservation of Water should be discussed everywhere," says Union Minister Smriti Irani .

"In our village, there was a well, but no water. We'd have to walk for hours and wait to get water. That's when we decided to change it," says Nasim Ansar.

"In our village, there was a well, but no water. We'd have to walk for hours and wait to get water. That's when we decided to change it," says Nasim Ansar, a water warrior during @harpic_india-News18 #MissionPaani Waterthon.#MeriJalPratigya pic.twitter.com/2uJ4ityT1e

Akshay Completes 21 Kms | Akshay Kumar has completed the 21 kilometer challenge. He is walking on the treadmill in solidarity with people, who walk for hours every day in search of water.

We should all try to create awareness among the people to not dump waste in water: Sudarsan Pattnaik (@sudarsansand) @harpic_india| #MeriJalPratigya

Uttarakhand Chief Minister Trivendra Singh Rawat says, "Ganga and Yamuna that flow from Uttarakhand-- the two rivers contribute to about 45% of the irrigation and meet the needs of food for farmers and citizens of India. Even then, Uttarakhand faces water scarcity. One reason is that the rivers flow in deep valleys while the villages are placed at high altitudes. Sometimes the springs and rivers dry up. To give a new life to rivers in the region, we have mainly focussed on the rain water harvesting. Rain water harvesting can help us meet the water requirements. Our primary focus is to save water, bring in more lakes to meet our water needs in the future." 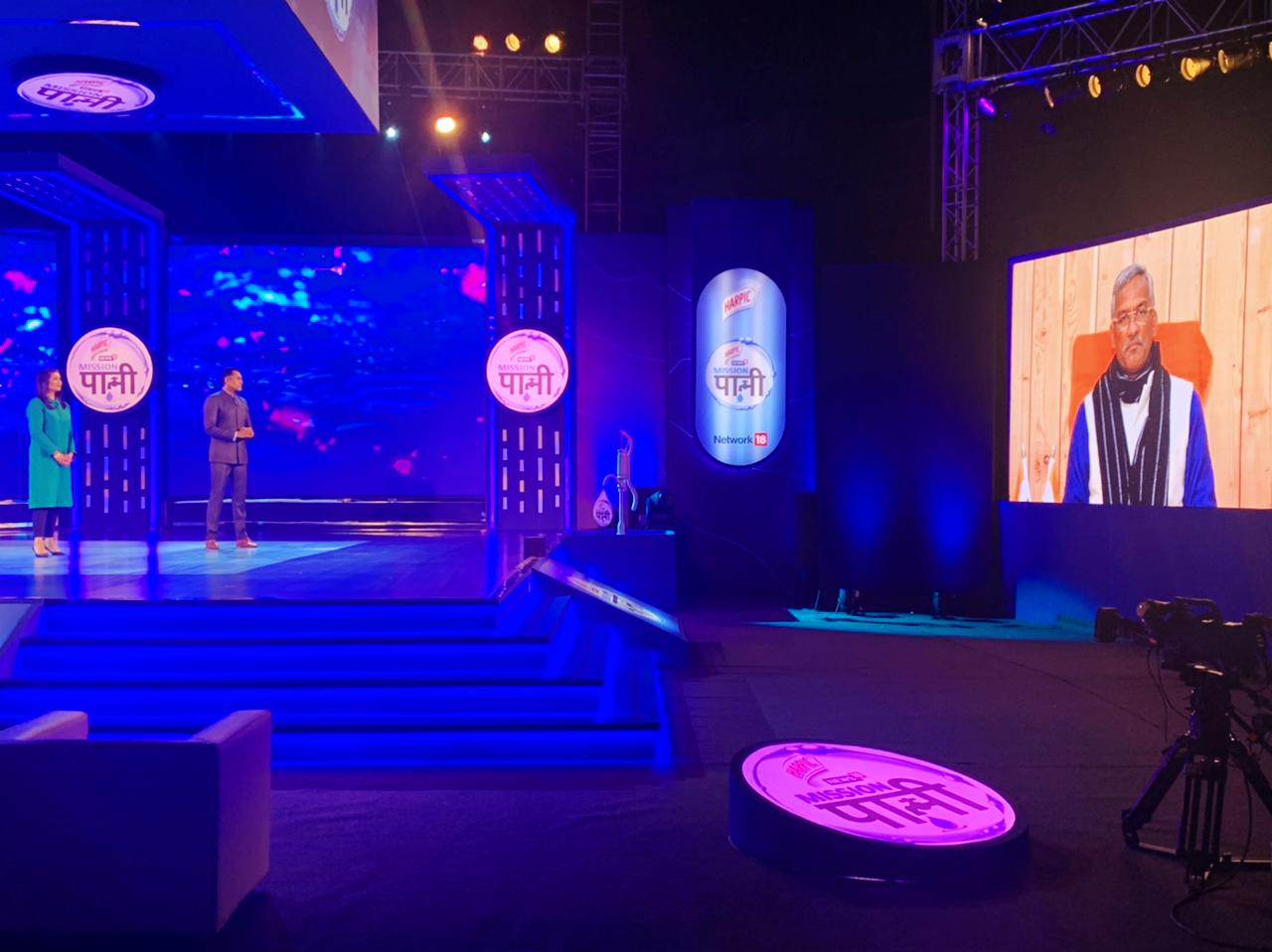 Uttarkhand Chief Minister Trivendra Singh Rawat throws light on the shortage of water in the state. He says, "Our rivers are low-lying, but our residential areas are high up in the hills. Plus our rivers dry up faster in the state."

Mandira Bedi at the event: 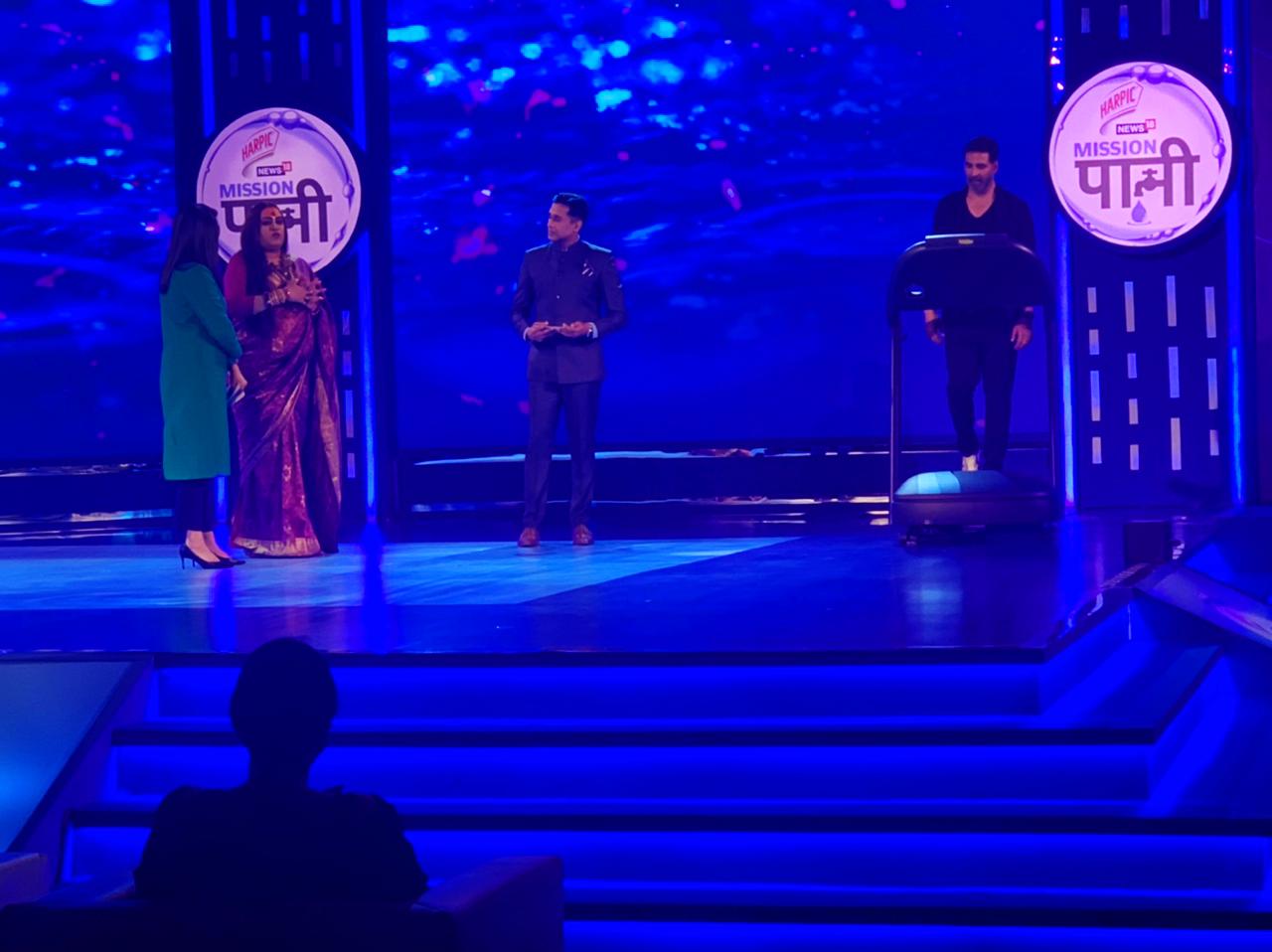 Thousands have been drafted into the Mission Paani movement, through the administering of a Jal Pratigya, which obliges them to live a life of judicious water use and hygiene. Mission Paani Waterthon is set to feature notable individual efforts to conserve water and promote hygiene, whether it’s Lt. Col. SG Dalvi, who has spearheaded a new movement to conserve rainwater, or Amla Ruia, who works to combat water shortage across India. Also in attendance would be remarkable young activists, like Licipriya Kanjugam, one of the youngest climate activists in the world, and Naina Lal Kidwai, a banking veteran who now works to alleviate India’s water crisis.

While the Mission Paani Waterthon will be a grand stage to celebrate efforts for water conservations and hygiene, it will also provide the perfect platform for policymakers and thought leaders to chart out the road ahead.