Prime Minister Narendra Modi visited the Haifa Memorial in Israel to pay homage to Indian soldiers who fought in World War 1 and stopped at a mobile desalination unit at a beach with Israeli counterpart Benjamin Netanyahu. He will later leave for Hamburg in Germany to attend the G20 summit.

As Prime Minister Narendra Modi hugged his ‘friend’ Israeli Prime Minister Benjamin Netanyahu, he seemed to have angered Palestine. In May, Modi hosted Palestinian President Mahmoud Abbas for a state dinner in New Delhi. The Indian Prime Minister had then reaffirmed the country's commitment to a two state solution and the Palestinian cause.

PM Narendra Modi pays tribute to the Indian soldiers at the Word War I Memorial. He laid a wreath at the Haifa cemetery.

On our way to Haifa to honor the fallen Indian soldiers who were killed during WW1. Israel respects these Indian heroes. pic.twitter.com/gFWh6QeL0O

PM Modi has reached Haifa with Israeli PM Benjamin Netanyahu. He will pay a homage to Indian soldiers shortly.

PM Narendra Modi leaves for Haifa along with his Israeli counterpart Benjamin Netanyahu. Prime Minister Narendra Modi will meet Moshe Holtzberg, the Israeli child who survived the 2008 Mumbai terror attacks as a two-year-old, on Wednesday.

RECAP | Prime Minister Narendra Modi also met Moshe Holtzberg on Wednesday, the Israeli child who survived the 2008 Mumbai terror attacks as a two-year-old.  Moshe was orphaned when his parents Rivka and Gavriel Holtzberg, serving as emissaries of Chabad in Mumbai, were killed along with six others by LeT terrorists at the Nariman House, also popularly known as Chabad House during the 26/11 attacks. His nanny Sandra was awarded an honourary citizenship by the Government of Israel so she could live in the country and care for Moshe, who is now 10-years-old. Moshe now lives with his maternal grandparents — Shimon and Yehudit Rosenberg. India and Israel live in complex geographies and are aware of strategic threats to regional peace and stability, Prime Minister Modi said after holding wide-ranging talks with his Israeli counterpart Benjamin Netanyahu on the second day of his landmark visit, the first by an Indian premier.

RECAP | Later, a joint statement said the two leaders recognised that terrorism poses a grave threat to global peace and stability and reiterated their strong commitment to combat it in all its forms and manifestations. Voicing their common concern over the growing menace of terrorism and radicalism, India and Israel agreed to cooperate to protect their strategic interests and called for strong measures against terror groups and their sponsors.

RECAP | India and Israel live in complex geographies and are aware of strategic threats to regional peace and stability, Prime Minister Modi said after holding wide-ranging talks with his Israeli counterpart Benjamin Netanyahu on the second day of his landmark visit, the first by an Indian premier. 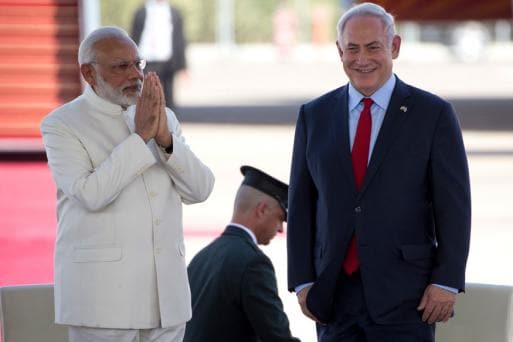 The agreements involved cooperation in key sectors like space, agriculture and water conservation.

RECAP | Seven agreements were signed between India and Israel on Wednesday after Prime Minister Narendra Modi held in-depth talks with his Israeli counterpart Benjamin Netanyahu. The agreements involved cooperation in key sectors like space, agriculture and water conservation. A Memorandum of Understanding (MoU) was signed between Department of Science and Technology and Israel’s National Technological Innovation Authority for setting up of USD 40 million worth India-Israel Industrial Research and Development (R&D) and Technical Innovation Fund.

RECAP |  While addressing the Indian diaspora, Prime Minister Narendra Modi on Wednesday said Israel is the land of martyrs and the country has proved that size and number doesn't matter for them. Praising Israel and its people, Modi added that every nation's development is in the spirit and self-determination of its citizen and not in its size.

Prime Minister Narendra Modi on Wednesday said the relationship between India and Israel is a relationship of friendship, tradition and historical significance. Addressing the Indian diaspora in Tel Aviv, Modi said that the Jewish community has enriched India with their contribution to different fields. Modi was accompanied to the event by his Israeli counterpart Benjamin Netanyahu.

Prime Minister Narendra Modi, who is on a three-day visit to Israel, on Thursday will visit Haifa to pay homage to fallen Indian soldiers in World War I, which will be followed by the lunch with CEOs. Narendra Modi will be leaving for for Germany at 5pm ( 7:30pm IST). He is scheduled to reach Hamburg from Israel later tonight.