Prime Minister Narendra Modi, who is on a three-day visit to Israel, on Wednesday said the relationship between India and Israel is a relationship of friendship, tradition and historical significance. Addressing the Indian diaspora in Tel Aviv, Modi said that the Jewish community has enriched India with their contribution to different fields. Modi was accompanied to the event by his Israeli counterpart Benjamin Netanyahu.

Prime Minster announces a Delhi-Mumbai-Tel Aviv flight. Invites everybody to come to India. Prime Minister ends his address to the "Modi-Modi" chants.

Prime Minister Narendra Modi talked about his meeting with Baby Moshe, the survivor of the 26/11 Mumbai terror attacks. “I met Moshe Holtzberg and I saw what victory over terror looks like,” he said. The PM had offered Moshe a long-term visa to India during the meeting.

"I live in Afula, but I remember our connection to Nariman House...I hope I will be able to visit Mumbai and when I get older, I live there...Dear Mr Modi, I love you and the people in India," Moshe had said.

There are around 600 Indian students in Israel. They are the bridge of technology and innovation between India and Israel. Science, innovation and research will be the foundation of the relationship between the two nations. What students are learning here, will help to better lives in India in the years to come, says PM Modi.

"Women are a key to India's prosperity," says PM Modi... "We have abrogated more than 1200 old laws and we are on course to abrogating 40 more obsolete laws in India."

The Indian farmer is very hardworking. It is due to their efforts that we have been able to achieve record output this year. My government is working on policies to double the income of farmers by 2020. We are leaving no stone unturned to provide them with the best help. Right from the quality of seeds, to upgradations of the irrigation system, we are looking at every aspect, says PM Modi.

Innovation has a big role to play in Israel’s advancement. Innovation is important everywhere, be it defence, agriculture, industry. We have opened up incubation centres in India with innovation in mind. We have initiated different programmes to help te youth innovation. The Mudra policy was started by my government to help finance micro units, says PM Modi.

Have to fulfill dream of own house,water,electricity for poor households in India by 2022: PM Modi #IndiaIsraelFriendship pic.twitter.com/3QsaGGBZGu

In defence sector, despite reforms, we were lagging behind. "We brought reforms in the defence sector, allowing foreign direct investment in the sector, so that this sector doesn't stay behind anymore."

"India has a very small Jewish community, but Jews in India have made their presence felt in every field they have been a part of. The Jewish community has enriched India with their contribution to various fields."

"I would also like to take this opportunity to remember the great Israeli leader Shimon Perez... In the past few years, Israel, with its technology, has shocked and at the same time lit up the world."

A country's progress is not decided on the basis of its size or its population. Israel has proven time and again that size doesn't matter.

"The relationship is a relationship of friendship, of the tradition of historical significance." There is a commonality in our festival. We have Diwali in India, we have Hanuka in Israel, says PM Modi.

I wish Israel all the luck for the Jewish Olympic games. Our (Indian) team will also participate in the games and they are here in this gathering, too.

This is the first time in 70 years that an Indian Prime Minister has come to Israel. It's an occasion to be happy but poses a question too, says PM Modi.

"Netanyahu and I have one more thing in common - we were both born in independent countries."

"They are the Jews of Israel. They love Israel and they love India. This is a historic meeting between two nations. we have agreed on a number of things but there is always the human bridge which is byond everything. "We have also decided to bring two nations together and there is a human bridge between the two countries that is you.

The Israeli Prime Minister is interacting with the assemblage in Hebrew and is simultaneously translating it for the Indian Prime Minister Narendra Modi.

Israeli Prime Minister Benjamin Netanyahu will address the gathering first. He starts his address with a "Namaste", to a frenetic applause.

India's national anthem is being played at the Convention Centre.

Prime Minister Narendra Modi will be addressing the Indian Diaspora in Israel as the Prime Minister had declared on the first day of his historic visit to Israel. The two leaders have already arrived at the Convention Centre in Tel Aviv, Israel. 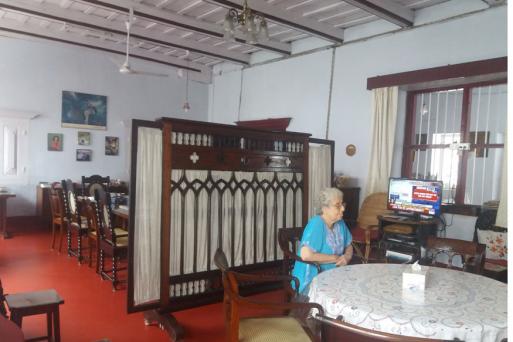 One would find it rather difficult to imagine a person residing in an ancient home that is 'squeezed' between boutiques and antique shops.

PM Modi said that he wants to double the farmer income by 2022, and this relationship and the technology it brings will help that cause.

"You and your family will get a long-term visa to India and you can visit India whenever you want," Prime Minister Modi tells Baby Moshe.

Benjamin Netanayahu tells Baby Moshe that PM Modi has invited him to visit India and Moshe will join him on the trip.

5:30 pm (IST)
Prime Minister Narendra Modi also discussed the current situation in West Asia and hoped that peace, dialogue and restraint prevail. "PM Netanyahu and I agreed to do much more together to protect our strategic interests and also cooperate to fight growing radicalization. "

"It has been a memorable 24 hours," PM Modi says, extending an invitation to PM Netanyahu and first lady to pay a visit to India.