The farmers reached Mumbai on Sunday after walking a distance of 180 km from Nashik. The rally includes men, women and children who have gathered to press the government on the agrarian distress.

Vinaya Deshpande
Radhika Ramaswamy
New Delhi: Thousands of farmers have set up camps in Mumbai's Azad Maidan and are protesting for complete loan waivers and the implementation of the MS Swaminathan Committee's recommendations. They have put a plan to march to the Assembly on hold and would take a call on it after meeting Chief Minister Devendra Fadnavis around noon.

The farmers reached Mumbai on Sunday after walking a distance of 180 km from Nashik. The rally includes men, women and children who have gathered to press the government on the agrarian distress.

Here is a look at some of their heart wrenching stories: A 48 year-old protester from Ganeshgaon in Tryambak Taluka has come with a solar panel installed on his head to charge farmers' phones free of cost.

Nathu Udar, father of two children said, "I have a wife, two children and three buffaloes. I want ownership of the four acres of forest land."

"I got this panel for my house but when we decided to come here, I thought I should install this on my head, so that I can charge the panels and use it to charge farmers' phones" he added. Farmers are now surviving on groundnuts, the supply of which is also running out. Farmers such as a 60 year-old Sundarabai Mhadu Bhoi, have carried groundnuts to the rally which they have generously shared with the reporters at the venue.

Sundarabai, a farmer from Dayana village in Chandwad has walked for seven days along with her fellow villagers to join the protest.

"We started marching on 5th March towards Nashik and reached on the 8th day. All of us protesting want rights on our forest land," said Sundarabai. 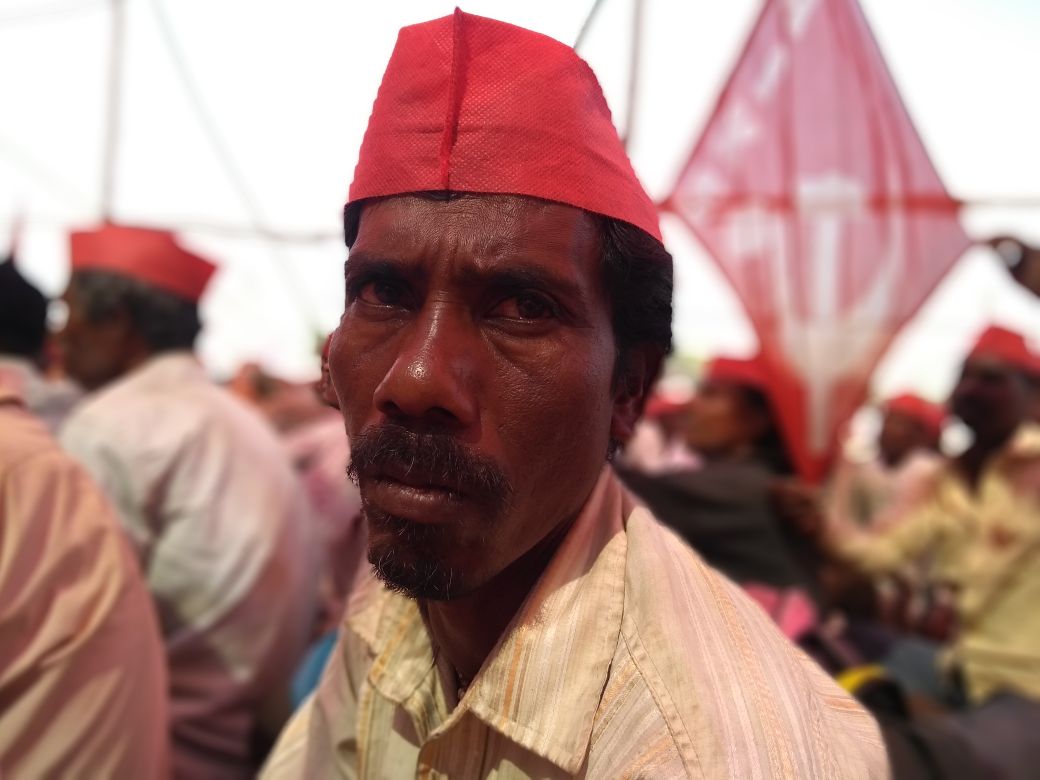 A resident of Borwan village in Dhundri, Nashik District, father of five children. A member of the tribal community from Nashik, Pushparaj wants ownership of his ancestral forest land of 4.5 acres which he has been tilling since his childhood.

"I am illiterate. I don't know in which year I was born, what is my age. I don't know from when I have been tilling my land. I can only tell you, I till it, my father tilled it and his father used to till it too, " said Pushparaj when asked about his demand.

"I have a family of seven including, with four daughters and a son. All my daughters go to school, the eldest one being in the 5th standard and my son is a toddler," he added. A 31 year-old onion farmer from Junnar, Pune who has been protesting for fair crop price for years now.

"Minimum support price is a problem. There has been no increase in pension since my grandfather's time. I have a family of 6 to support," said Mangesh.

"The MSP of our produces range from Rs 5 to Rs 7 per kg to middlemen and wholesalers whereas the market price is Rs 20 to Rs 40. Why don’t we have a say in this? I won't stop the agitation unless fair prices are fixed," he added. A 23 year-old farmer from Kalwan in Nashik.

"It is our ancestral forest plot but we never got its possession. The land is rightfully ours and we demand for its possession," said Gangadhar.

"We have ration cards but receive ration at all. My father was also a farmer and he gets a meagre pension of Rs 600. How can we survive like this?" he added.