Heavy rains also lashed parts of Porbandar, Gir Somnath, Junagadh and Amreli districts in Saurashtra region, as well as Valsad and Navsari districts in south Gujarat throughout the day.

Mumbai, Gujarat Rains LIVE Updates: After IMD issued an alert of heavy rainfall in Gujarat, seven NDRF teams have been deployed in in Valsad, Navsari, Surat, Porbandar, Dwarka, Rajkot and areas of Kutchh, said the department of Information, Government of Gujarat.

Mumbai's suburbs and neighbouring Thane district received over 100 mm rainfall in the last 24 hours, the IMD said on Monday and predicted more heavy showers in those areas and other parts of Konkan Maharashtra.

Here are the LIVE UPDATES on Mumbai, Gujarat Rains:

☁ After witnessing a spell of heavy rainfall over the past three days, Mumbai and neighbouring Thane received moderate rains on Monday, but the IMD predicted showers will continue in the night in the region.

☁ Heavy rainfall continued in several parts of Saurashtra region on Monday, causing flood-like situation in some areas a day after Khambhalia taluka in Devbhoomi Dwarka district received 487 mm downpour, officials said. A team of the National Disaster Relief Force (NDRF) was deployed at Khambhalia on Monday to meet rain-related exigencies in the area, they said.

☁ A nearly three-decade-old masonry bridge over Sabli river in Keshod taluka of Junagadh caved in after heavy rain on Monday, causing hardships to locals. Junagadh District Development Officer Praveen Chaudhary said the bridge was constructed in 1991 and was used only by locals.

☁ Waterlogging occurred in various parts of Rajkot, Gujarat, after heavy rainfall in the city.

☁ Here is the multi-hazard warning on the monsoon situation over India, issued by IMD.

☁ High tide of 4.67 meters expected at 1:03 pm today as per Brihanmumbai Municipal Corporation in Mumbai, Maharashtra.

☁ The Powai Lake in Mumbai, which supplies drinking water to the Maharashtra capital, began to overflow since Sunday morning, due to the high and incessant rainfall.

☁ Here is the total rainfall in Mumbai in the past 24 hours, courtesy an IMD graph:

06-07-2020; 1200 IST; Thunderstorm with rain would occur over and adjoining areas of Few places of Northeast, North Delhi, Ghaziabad, Palwal, Hodal, Mathura, Alwar, Modinagar, Hapur, Hindon AF during the next 2 hours.

☁ Several districts in Gujarat witnessed heavy rains on Sunday, with Khambhalia tehsil in Devbhoomi Dwarka district receiving as much as 434 mm rainfall during the day, 292 mm between 6 and 8 pm alone, which led to major water logging, officials said.

☁ Heavy rains also lashed parts of Porbandar, Gir Somnath, Junagadh and Amreli districts in Saurashtra region, as well as Valsad and Navsari districts in south Gujarat throughout the day, they said. 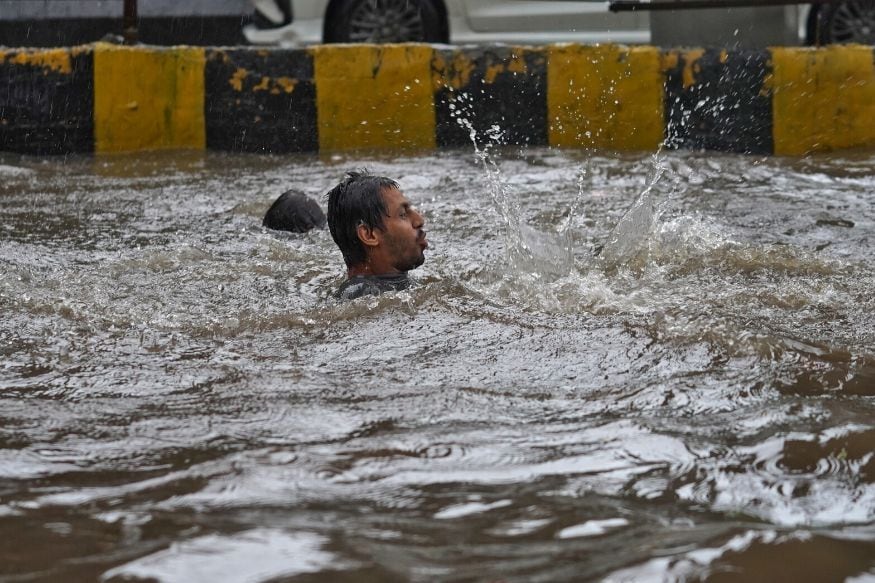 ☁ The Ahmedabad centre of the India Meteorological Department (IMD) predicted heavy to very heavy rainfall in Saurashtra, north and south Gujarat over the next three days. ☁ A farmer was killed in a lightning strike in Surendranagar district, while one person was feared drowned after a pickup van he was travelling in was swept away in a strong current of water following the downpour, police said.