At least 22 people have been killed and 30 injured in a stampede at Mumbai's Prabhadevi Railway Station, says Brihanmumbai Municipal Corporation (BMC). The station was earlier known as the Elphinstone Road railway station.

West Bengal Chief Minister Mamata Banerjee today expressed condolences over the deaths caused by a stampede in Mumbai. "Saddened at the loss of lives in Mumbai. Prayers for the injured to recover. Condolences to the families who lost loved ones," Banerjee said in a Tweet. At least 22 persons were killed and over 30 injured in a rush-hour stampede on a narrow foot over bridge (FOB) linking Elphinstone Road and Parel suburban stations during heavy rain today morning, officials said.

Saddened at the loss of lives in Mumbai. Prayers for the injured to recover. Condolences to the families who lost loved ones Kishor Thakkar, a regular commuter on the route, said there was a loud noise, which may have led the people to believe that a part of the bridge had fallen, leading to the stampede.

As his party Shiv Sena mounted a stinging attack on the government over the Mumbai railway foot overbridge tragedy today, Uddhav Thackeray visited the KEM hospital where bodies of the 22 deceased have been kept. "Whatever happened is very bad...I will look into it," he said when a man persistently wanted him to do something following the tragedy. At least 22 people were killed and over 30 injured in a rush hour stampede on a narrow foot overbridge (FOB) linking Elphinstone Road and Parel suburban stations during heavy rain this morning. Some of the injured are also admitted to the hospital.

Thackeray was responding to persistent demand by Vikrant Kadam, a former government servant, who followed the Sena president since the time he entered the premises of the hospital, run by Shiv Sena-controlled Brihanmumbai Municipal Corporation (BMC), to do something to ensure such disasters do not happen again.

Minister of Commerce and Industry, Suresh Prabhu expresses grief: " Deeply saddened by the loss of innocent lives in the unfortunate incident at Elphinstone Road foot over bridge in Mumbai."

Outside, Manish Mishra saw "thousands cramped" in the six-to-eight- feet foot overbridge-- people scrambling to get down the stairs, some climbing up to avoid being drenched and still, others just remaining under the bridge canopy to escape rains. "It was around 10 am. There was a loud noise at the time of the stampede. There were thousands of people cramped in the six-to-eight-feet gap on the bridge," Mishra said.

Several people waiting on the platform also got dragged into the chaos, Mishra said.

"We took cold water from our home, rushed to the spot and sprinkled it on some of those who were caught in the stampede so that they gain consciousness," he added.

​
Leader of Opposition in the Legislative Assembly Radhakrishna Vikhe-Patil of the Congress said he had written to the railway ministry last year seeking a meeting of public representatives with the railway minister to solve the issue of overcrowding at stations in Mumbai.

"This incident should be treated as a case of murder. An FIR under IPC section 302 (murder) should be lodged against railway officials," the senior Congress leader said. "Had the administration worked towards providing basic facilities to commuters, instead of renaming the railway station (Elphinstone) as Prabhadevi, so many lives would not have been lost," Vikhe-Patil added. 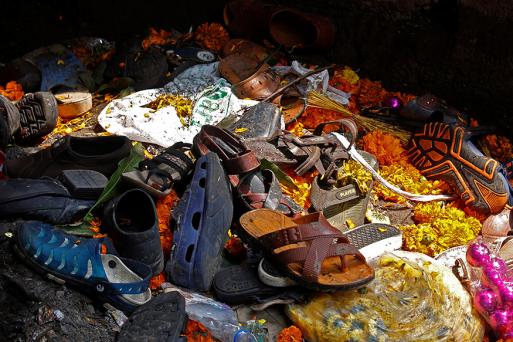 The ruling BJP's ally Shiv Sena on Friday dubbed the stampede on a foot overbridge at Elphinstone railway station a "massacre", while opposition parties also hit out at the Central and Maharashtra governments over the tragedy. The non-BJP parties said instead of pursuing Prime Minister Narendra Modi's pet bullet train project, the Centre should focus on improving the safety of passengers and amenities at stations.

"This incident is a public massacre for which the government and railways are responsible. We have time and again demanded that the old and dilapidated foot overbridges be redeveloped but no action has been taken yet," Sena MP Sanjay Raut told PTI.

"The bridge was really narrow and Shiv Sena has been asking the BJP to settle since the beginning but the government cares about the bullet train. BJP's priorities are wrong. At first, the trains should be settled and then the bridges should be reconstructed but all the government wants is to start a bullet train which only a few will be able to use," Shiv Sena spokesperson Manisha Kayande said.

9:30 AM
Heavy rain, Broken roof leaking water on the stairs

10:00 AM
Crowd gathers on the narrow bridge due to rain outside

One person slips,  pushing others, leading to stampede

10:45 AM
Chaos on foot overbridge leads to many deaths within minutes

"From the day I have come till today, I have been demanding and fighting with the authorities and ministers. I kept demanding but unfortunately, the right investigation never happened. They don't want to work on time. They gove technical excuses and escape. What's more urgent bullet train or our local,"  Arvind Sawant said.

Shiv Sena MP Arvind Sawant wrote to former Railways Minister Suresh Prabhu more than two years back seeking a new foot overbridge at the Elphinstone Railway station in Mumbai. 22 people lost their lives and over 30 were injured at the same location in a stampede Friday morning. The tragedy struck the business district when daily commuters were stuck up at the railway station and the footbridge as heavy rains lashed Mumbai.

#LatestVisuals from KEM hospital where the injured persons are being treated. 22 dead, 39 injured in #MumbaiStampede so far. pic.twitter.com/0g0VNjlndL 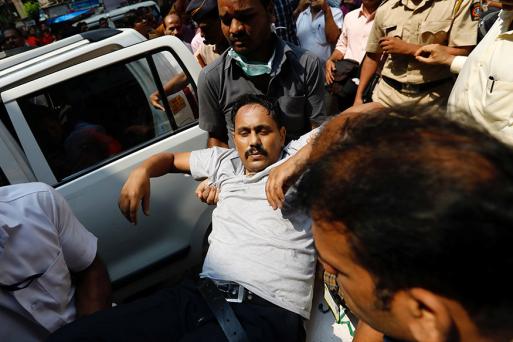 The Mumbai Suburban Rail disaster forced Union Railway Minister Piyush Goyal, who was in Mumbai on a scheduled visit, to cancel his program and order a high-level inquiry.

Former Maharashtra chief minister Ashok Chavan says that incidents such as the Elphinstone stampede have disturbed people and this government has lost face.

Minister for Railways Piyush Goyal, who is currently in Mumbai, took stock of the situation at the footover bridge where 22 people lost their lives in a stampede this morning. "Wherever there is a need for footover bridges to be widened, we will do it immediately on high priority," he told ANI, adding that he had issued directions for safety and capacity audit of footover bridges in Mumbai.

The total number of people who sustained injuries in the stampede this morning stands at 39, reports ANI.

Minister of State Manoj Sinha has said that nobody should do politics over such an unfortunate incident. There are people who always look for opportunity. We are above politics on this issue, he said.

I don't think any question has been raised on structural strength of bridge; the incident happened due to stampede: MoS Railways Manoj Sinha pic.twitter.com/dcVbUZ6Atn

"My thoughts & prayers are with families who lost their dear ones in the Mumbai’s Elphinstone rly. station stampede. I pray for the injured," Arun Jaitley wrote on Twitter.

A high-level probe has been ordered, says Minister for Railways Piyush Goyal. The Union Minister expressed condolences to the families of those who died in the stampede. "We will take all necessary steps to avoid such incidents in future," he said.

Inquiry will be conducted by Government of Maharashtra and Ministry of Railways and necessary, strict action will be taken, says Maharashtra chief minister Devendra Fadnavis.

Maharashtra chief minister Devendra Fadnavis has expressed shock over the stampede that led to the death of 22 people this morning at Mumbai's Elphinstone railway station. "Spoke to Chief Secretary and @CPMumbaiPolice ; asked them to reach hospital to monitor and ensure that everyone gets all the help."

Compensation of 5 Lakhs each will be given to kin of those dead.State Govt will bear medical expenses of injured: Vinod Tawde,MH minister pic.twitter.com/vxMGF820m4

One of the oldest city bridges, the Elphinstone Bridge, has been a topic of debate for some time now. This is the same stretch where renowned cardiologist Dr Deepak Amrapurkar had drowned in an open manhole late last month.

A relative of a stampede victim grieves at a hospital in Mumbai on Friday. (REUTERS/Danish Siddiqui)