Municipal workers try to clean a manhole in a waterlogged street in Mumbai. (AP Photo/Rafiq Maqbool)

Mumbai Rains LIVE Updates: Maharashtra State Disaster Management Authority has warned of rain and thundershower with strong winds at many places over Mumbai, Mumbai suburban, Palghar, Pune, Raigad and Thane during the next 2-4 hours.

◕ A vacant building in Thane city collapsed shortly before midnight amid continuous rains, an

official said on Sunday. Thane Regional Disaster Management Cell chief Santosh Kadam said there were no injuries as the single-level structure was vacated over a month ago after it was declared

◕ King's Circle has witnessed waterlogging amid the heavy shows. ◕ IMD says: "Mumbai and its sub-urban areas have received extreme rainfall during last 24 hours. Rainfall till 8.30 am today: Thane-28cm, Santacruz-20.1cm, Colaba-13cm. Forecast- Intense to very intense spell of rainfall is very likely during next 3-hours."

◕ The yellow warning by the IMD means 'be updated' while orange warning means 'authorities should be prepared' and the red warning indicates 'take action.' 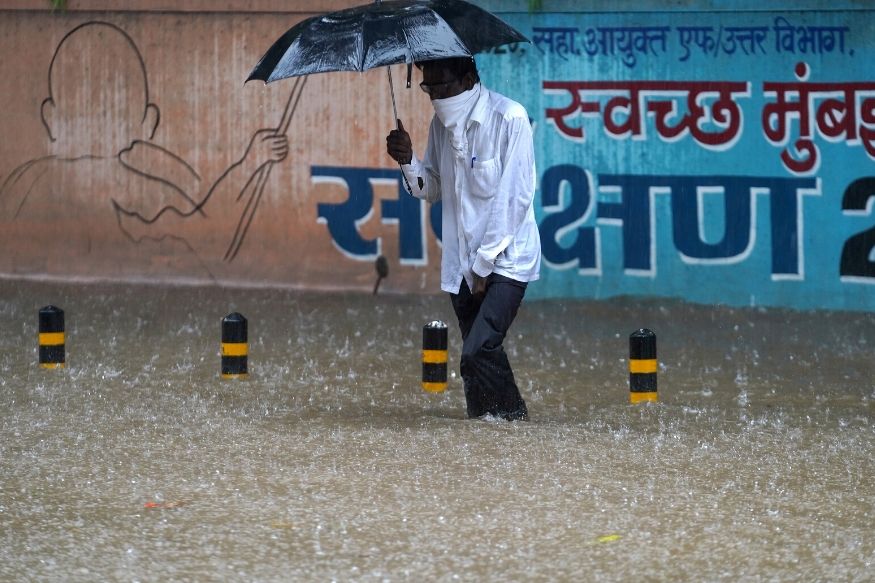 ◕ Earlier, in a statement at 3 pm, the IMD said the monsoon remained widespread and active over the entire Konkan belt including Mumbai with heavy to very heavy rainfall in many places.

◕ The disaster management cell of the Brihanmumbai Municipal Corporation (BMC) said water-logging was reported in low-lying areas of the city such as Sion, Dadar and Milan Subway.There were 19 complaints of tree/branch falling, but nobody was injured in the incidents, it said.

◕ The Thane-Belapur Industry Association area reported 116 mm rain from 8.30 am to 5.30 pm on Saturday, the IMD said. The Alibaug observatory in neighbouring Raigad district recorded 87.4 mm rainfall from 8.30 am to 5.30 pm on Saturday. Harnai in coastal Ratnagiri district, south of Raigad, reported 52.6 mm rainfall during the period, while the Ratnagiri city weather station recorded 54.1 mm rains. The Satara district in the Western Maharashtra region reported 9.6 mm rainfall, while Kolhapur witnessed 3 mm rain.

◕ Shanties in Bandra near the sea hit by huge high tides.

◕ IMD has predicted intermittent moderate to heavy rain expected in Mumbai and suburbs in the next 24 hours and asked fisherman on the Maharashtra-Goa coast not to venture into the sea. Possibility of very heavy rainfall at isolated places.It has forecast heavy to very heavy rainfall in Mumbai, Thane, Palghar, Raigad as well as Ratnagiri and Sindhudurg in Konkan Maharashtra in next two days. Besides, Pune, Nashik, Dhule, Jalgaon, Nandurbar, Satara, Kolhapur, Parbhani, Nanded, Hingoli are also likely to receive heavy rains, it said.

◕ The Powai lake here started overflowing in the morning after the heavy downpour, the Brihanmumbai Municipal Corporation (BMC) said. Mumbai Police urged citizens to stay away from the sea shore and waterlogged areas.The water from the lake, having a storage capacity of 545 crore litres, is used for industrial purposes and it flows into the Mithi river.

◕ Maharashtra State Disaster Management Authority has warned of rain and thundershower with strong winds at many places over Mumbai, Mumbai suburban, Palghar, Pune, Raigad and Thane during the next 2-4 hours.