‘Murderers of Aarey’: Axing of Trees, Arrest of Green Activists Divides BJP and Shiv Sena Ahead of Election

More than a thousand trees in Aarey colony of Mumbai have been cut as 29 activists were arrested and denied bail for protesting.

Mumbai: Shiv Sena chief Uddhav Thackeray on Saturday backed the activists protesting against felling of trees in Aarey colony in north Mumbai and promised to take action against those responsible if voted to power in the upcoming assembly election.

“The upcoming government will be our government, and once we come to power once again, we will deal with the murderers of Aarey forest in the best possible manner," Thackeray tweeted, terming it as an "important issue" that he won't hesitate to address.

The issue became the latest flashpoint between allies Sena and the BJP, as the latter defended the axing of trees. The chopping of trees started under the cover of darkness on Friday after the Bombay High Court ruled that Aarey is not a forest.

More than a thousand trees of the over 2,600 to be cut have already been chopped in the city’s ‘green lung’ to create space for the construction of a Mumbai Metro train shed.

Environmentalists and residents of Aarey colony have strongly opposed the move, and 29 activists were arrested on Saturday for protesting after prohibitory orders were imposed. Their bail plea was denied by a court and they have been remanded to judicial custody till Monday. 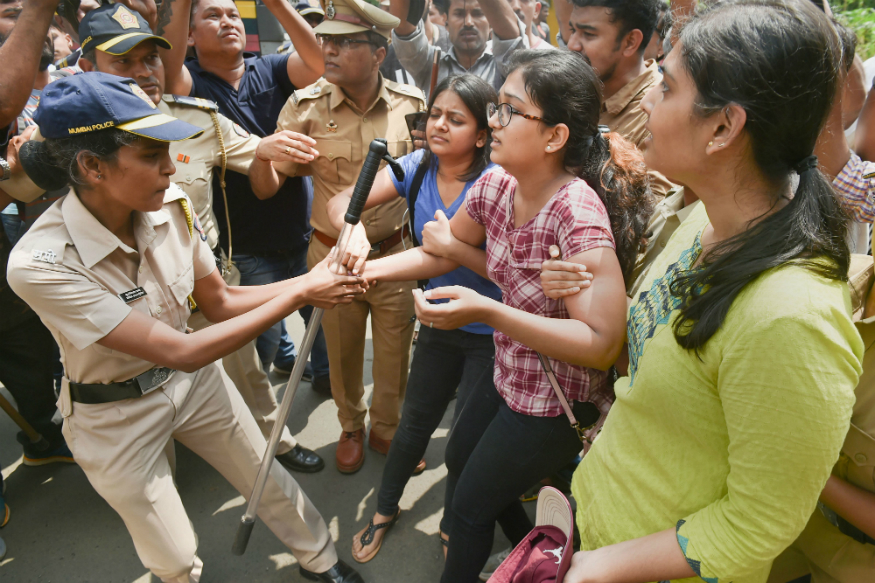 The police arrested 29 activists for protesting against the felling of trees.

Uddhav’ son Aaditya Thackeray also opposed the felling of trees and took potshots at Prime Minister Modi over the arrest of protesters at the site. "Detaining citizens and arresting youth for standing with environment. So much for speaking about environment at the global level while we destroy ecosystems here in the middle of the night," he tweeted, hinting towards the PM’s speech at the United Nations.

Expressing concern about students and others getting booked under non-bailable sections of IPC, he said, “I call out and request the Chief Minister to look into this and ask the police to not put any cases for people with love for the environment. We would be hypocritical then at the United Nations if we do this," he said.

However, the BJP - Shiv Sena's coalition partner in Maharashtra - justified the move by saying that such sacrifices are essential for development.

Chief Minister Devendra Fadnavis said the government did not wish to cut a single tree, but development is also important. “We will plant more trees to replace those cut down," he said, adding that he will speak to Aaditya Thackeray in this regard.

"There was a need to fell 20 to 25 trees for setting up the first metro station in Delhi and then also people had similarly opposed it. But for each tree that was cut five saplings were planted," he said.

Javadekar said the forest cover in the national capital has increased since then and public transport system has also improved. "This is the mantra of 'vikas bhi, paryavaran ki suraksha bhi' (development with environment protection)," the BJP leader said.

While the Shiv Sena extended support to the protesters, the Congress slammed the party, reminding that it is their own government in Maharashtra.

Congress leader and former MP Sanjay Nirupam, who has been vocal against the cutting down of trees, said that the Shiv Sena was adopting "double standard", as it condemned tree felling but continues to support the BJP-led government. "Such double standard would not do," he said.