The concept of ‘Hindu courts’, announced on August 15 by the Akhil Bharat Hindu Mahasabha on the lines of Sharia courts for Muslims, aims to deliver ‘justice’ based on the ‘Narada Shastra’.

Naurangabad (Aligarh): Adorned with marble interiors, bronze statues and pictures of Hindu Mahasabha leaders, the first ‘Hindu court’ is set to be inaugurated in Uttar Pradesh’s Hathras district soon. Christened as Sri Ram Bhavan, the ‘court’ will deliver justice on the lines of ‘Narada Shastra’.

The ‘chief justice’ of the ‘Hindu court’, who resides just 50 km from here in Aligarh, will have the first seat. She would get a wooden chair with some extra cushions. There will be a luxurious sofa for the petitioners on one side of the ‘judge’ and another one, at a distance, for the respondent party. Ceremony underway to appoint Puja Shakun Pandey as the ‘chief justice’ of the ‘court’. (Debayan Roy/News18.com)

A wooden stool will take centre-stage and act as a place for the paper exchanges and other documentation work. 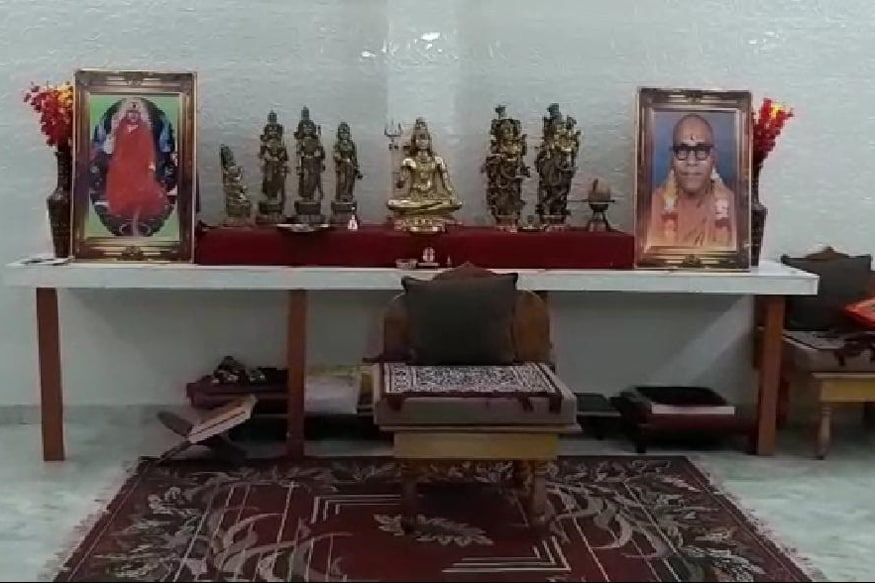 Bronze statues of deities and pictures of Hindu Mahasabha leaders at the 'Hindu Court'. (Debayan Roy/News18.com)

On August 15, amid loud chants of ‘Jai Hindu Raj’ and ‘Jai Hindu Rashtra’, the announcement to set up ‘Hindu courts’ in India was made from Akhil Bharat Hindu Mahasabha’s main office in Meerut. Its national president, Ashok Sharma, appointed Puja Shakun Pandey, the national secretary of the group, as the first ‘chief justice of the court’. The residence of Puja Shakun Pandey, the first 'chief justice' of the 'court'. (Debayan Roy/News18.com)

The ‘court’, which is being established on the lines of Sharia courts operated by mosques, All India Muslim Personal Law Board or the Jamaat Ulema-I-Hind, will have its ‘supreme court’ chamber at Naurangabad in Aligarh, where Pandey stays, followed by several other ‘district courts’ all over the country. 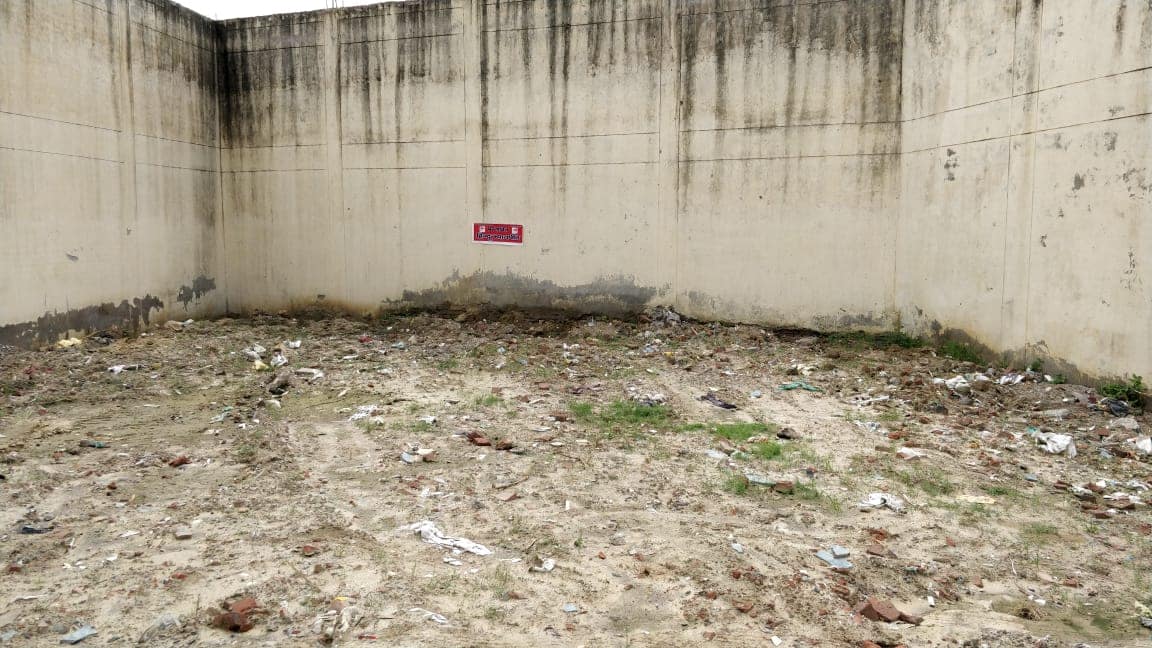 The plot of land where the ‘Hindu supreme court’ is set to come up. (Debayan Roy/News18.com)

In her two-storey saffron-painted house in Naurangabad, Pandey, often clad in the same colour attire, hosts guests in her richly decorated hall, while the other subtle one, where a portrait of Nathuram Godse takes the focus, is the ‘chief justice’ chamber.

A Hindu Court. Why?

Pandey does not mince words when she says that the main idea behind this ‘court’ originated in July 2018 when the All India Muslim Personal Law Board announced that it would set up Sharia courts across the country.

Speaking to News18, Pandey explains how the idea of a ‘Hindu court’ took shape.

“A month ago, Muslims demanded Sharia courts from the government and said that if such courts are not allowed, they should be given a new nation. In response to that, our vice-president, Ashok Sharma, wrote a letter to the Prime Minister to cancel such a request. Our PM did not do anything. Hence, we decided to establish the 'Hindu Nyaypeeth’ (courts),” says Pandey.

But as most would assume, the idea of ‘Hindu courts’ when the Hindu Marriage Act and inheritance laws exist, might paint the entire move as a reposte to demands of Sharia courts. But the ‘chief justice’ of ‘Hindu courts’ was quick to dismiss that.

“No one needs to get panicked about our courts. Just like Sharia courts are working, we will work among the Hindus. It’s not a revenge move. It’s a matter of justice. When we say India is for secular people, why do we have two laws for the same people divided on the basis of Dharma?” says Pandey who is of the firm belief that the SC/ST Amendment Act was the last nail in the coffin to establish this ‘court’.

How Would the Courts Function? Just like Ram’s Durbar

Pandey and other members of the Akhil Bharat Hindu Mahasabha (ABHM) believe that the ‘court’ would be nothing short of ‘Ram’s Durbar’.

Though the body has started earmarking lands on which the designated ‘Hindu courts’ would be established, the primary task before the body is to develop the bylaws and ‘constitution’ of the ‘Hindu Nyaypeeth’. 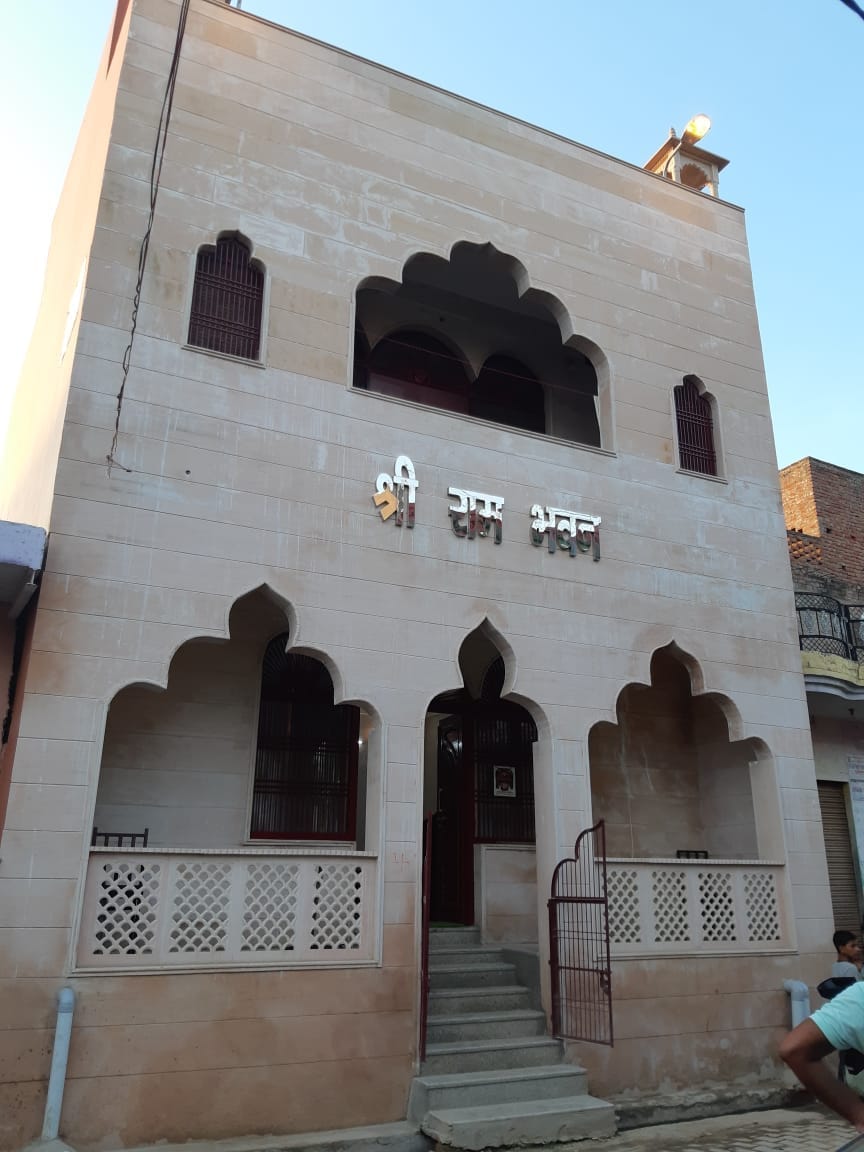 Exterior of the ‘Hindu court’ at Hathras. (Debayan Roy/News18.com)

Pandey’s husband and ABHM convener Ashok Pandey believes the real law on which the ‘Hindu courts’ would deliver justice would be the ‘ordinance of pandits’, written by a group of 11 ‘pandits’ in the 17th century at the behest of the British.

“The British had appointed a group of 11 people to develop laws which could help them in governing India. After the laws were put in place, the British realised that the laws were only for unity and hence they started their plot of divide and rule. We are reviving that Sanskrit book and much more,” says Ashok Pandey.

The ‘chief justice of the Hindu court’ also stated that Narada Sahita will play an integral part in the functioning of the ‘courts’.

“The courts will work in accordance with the Sanatan system. The courts will be like a Ram Durbar. All our judges would be self-sacrificing in nature and extremely strict. Our judges will give decisions after bearing witness to air, water, fire and earth. The judges would be dressed in plain clothes as prescribed in the Narada Sahita. The style of his chair and court has also been prescribed in the Narada Sahita,” says Pandey.

Pandey has maintained that at no point will the court challenge the established judicial norms or the Indian Penal Code, but says that punishment in a ‘Hindu court’ would aim for “reformation”.

“We will not have any punishment because we are not challenging the Indian Penal Code. If at all someone wants to adhere to our punishment, they can do so. Our punishments, if at all, will be in accordance with the Vedic system. Like serving the cows for three months. We will work towards reformation of the wrongdoer and ensure that his heart is changed,” says Pandey.

But the sole motive behind such a ‘court’ is to “help the Hindus”. Pandey says that ABHM had to take this step of establishing such ‘courts’ as Sharia courts were making the Hindus “helpless”.

“My Hindu Samaj is mostly literate and busy earning their bread and butter. He can’t see his children crying out of hunger while he voices his opinion. In this situation, who will take care of them? I am only serving my Dharma and if there is any policy which will destroy my Dharma or Hindus, then I am going to agitate. I do not need a mob,” says Pandey.

The Allahabad High Court on August 22 took cognizance of a public interest litigation (PIL) seeking its intervention against the constitution of ‘Hindu courts’ on the pattern of Sharia courts in several districts of western Uttar Pradesh. The court asked the counsel for the state government to apprise it of the matter on the next date of hearing.

The bench, comprising Chief Justice DB Bhosale and Justice Yashwant Varma, asked petitioner Ankit Singh to implead the district magistrate of Meerut and Pandey, first judge of the ‘Hindu court’. It also issued a notice seeking their response. The court has fixed September 11 as the next date of hearing.

Pandey has now hired a lawyer to argue the case, but believes there can be no backlash from the Court. “We need to first do something for it to be declared as illegal. Let our constitution and bylaws be drafted. Only then can the Court court take a call,” said Pandey.

“There is no basis to oppose the Hindu courts. What is Tehsil Divas? The Sub-Divisional Magistrate and District Magistrate are not judges, but they have been given the magisterial powers and they too handle cases. We will similarly handle the cases,” says Pandey.

Cases and Approach of ‘Hindu Courts’

As News18 sat in the ‘court’, Pandey discussed the latest ‘case’ she dealt with and how it was solved in her ‘chamber’.

A doctor of reasonably good reputation had indulged in polygamy and it was the second wife who wanted to approach the ‘court’. But Pandey convinced her that it’s of no use since she would not be given her due.

“There was a case where a man was married to a woman after keeping his first marriage a secret. Now since the second wife has no legal sanction in Hinduism, I ensured that they reach a settlement in our office and we gave the second wife maintenance. This way a court was not approached and the matter was solved,” says Pandey, beaming with pride.

Laying down her strategy, Pandey says she generally work with ‘spies’.

“When someone approaches me with a case, I hear the problem. Then I have my own spies, who give me details on who is guilty and who is not. On the basis of those inputs, I usually give my decision.”

Though Pandey is now busy appointing ‘judges’ for several districts, the first ‘judge’ of a ‘Hindu court’ agrees that two sets of laws cannot be employed to rule the citizens of one country.

If there is one thing that Akhil Bharat Hindu Mahasabha members or ‘Mahasabhis’ are proud of besides Dharma, it is Nathuram Godse.

Whether it be the life-size Godse statue in Meerut or the huge portrait of the ‘martyr’ in Pandey’s room in Aligarh, Mahatma Gandhi’s assassin has been accorded a special place in the life of the Mahasabhis. 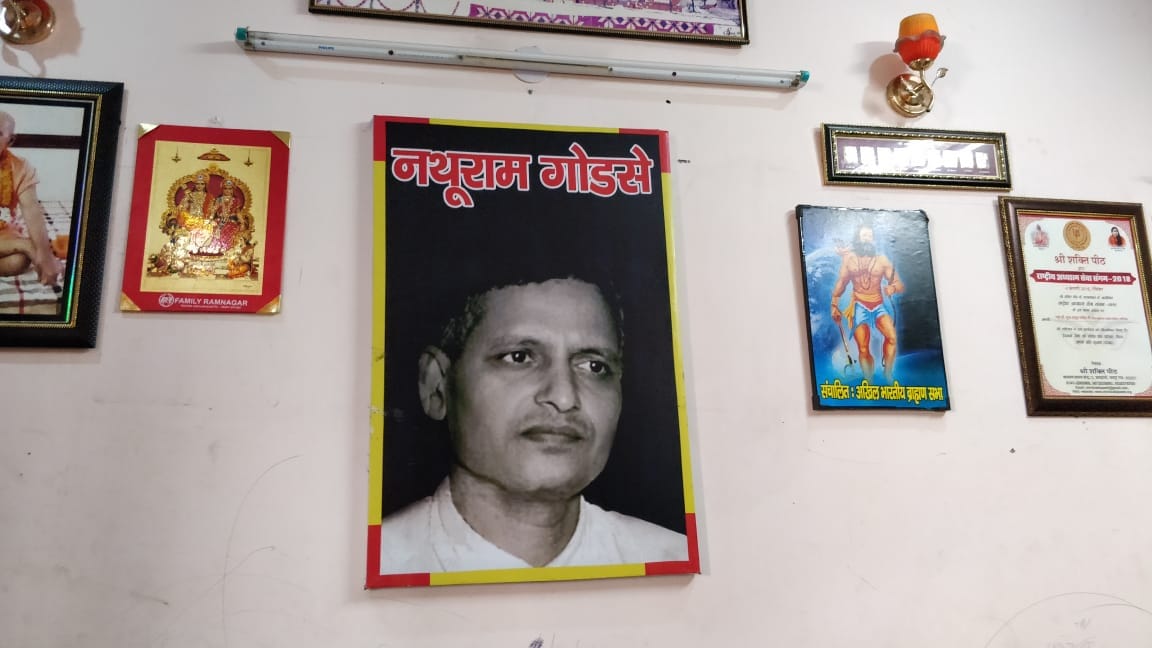 “Nathuram Godse is worshipped by us. We don’t think there is anyone else who has sacrificed more than him. He is also the biggest giver. People can sacrifice their health and wealth, but an individual sacrificing his dignity and respect for his motherland is rare,” Pandey tells News18.

“In fact, if I was born before Nathuram Godse, I would have killed Mahatma Gandhi. If a person can divide the nation for his selfish political motives, such a person should be killed. Godse knew that if Gandhi continued to live, this country would be further split into several parts,” says Pandey.

It was Meerut where India’s first statue of Godse was unveiled in 2016. The Akhilesh Yadav-led government subsequently placed restrictions on Mahasabhis, but allowed the installation of the statue under strict curfew.

In 1989, Gopal Godse, Nathuram’s brother, contested the Lok Sabha election from the city on a Hindu Mahasabha ticket and secured over 14,000 votes. Statues have since been installed at the Mahasabha’s central office in Delhi and the one in Gwalior.
Tags: