Narendra Modi UNGA Speech LIVE Updates: Prime Minister Narendra Modi in his address at the 74th session of the UN General Assembly (UNGA) on Friday in New York urged all the world's nations to unite in the fight against terrorism, saying that it was the greatest threat to humanity and the biggest global challenge.

In the 20-minute address, the Prime Minister did not mention Pakistan but focused firmly on terror, saying lack of unanimity on the issue dents those very principles that are the basis for the creation of UN. Noting that India is a country, that has given the world, not war, but Buddha's message of peace, Modi said, "And that is the reason why, our voice against terrorism, to alert the world about this evil, rings with seriousness and the outrage."

PM Modi invokes Tamil philosopher Pungundranar, Vivekananda in UNGA address | Seeking collective efforts to address serious global challenges, PM Modi in his UNGA speech invoked famous Tamil philosopher Kaniyan Pungundranar's quotes as well as those of Swami Vivekananda to emphasise that a fragmented world is in the interest of no one. Modi said in the last five years, India has worked towards strengthening its centuries old great tradition of "fraternity among nations" and welfare of the world, which is indeed, in line with the key objectives of the United Nations.

Highlighting the 'Ayushman Bharat' scheme, PM Modi said, "When a developing country, successfully runs the world's biggest health insurance scheme, giving 500 million people the facility of an annual health cover of Rs 500,000 for free treatment, the achievements and responsive systems that result from this scheme show the world a new path." Launched in September last year, Ayushman Bharat aimed at providing medicare to over 10 crore vulnerable families or an estimated 50 crore people. Under the scheme, a health cover of Rs five lakh is given to each beneficiary family per year.

Fragmented World is In Interest of None: PM Modi Tells UNGA | Modern technology is bringing about sweeping changes in every sphere of life and a fragmented world is in the interest of none, PM Modi said, pressing the international community to give a new direction to multilateralism. Modi said as the world is going through a new era, the countries do not have the option to confine themselves within their boundaries. Modi's remarks came at a time when tech billionaires like Elon Musk and Jack Ma have put artificial intelligence (AI) in the spotlight, cautioning that the modern technology will inevitably change the way people live and work in an unprecedented manner.

Global Warming is Increasing Number & Severity of Natural Disasters, Says PM Modi | PM Narendra Modi said India was one of the leading nations in the fight against climate change, though its contribution to greenhouse gas emissions was "very low". In his address, Modi elaborated on the steps taken by his government to fight climate change. "On one hand, we are working towards achieving the target of 450 Giga Watts of renewable energy, and on the other hand, we have also taken the initiative to create the International Solar Alliance," he said.

PM Modi Warns The World Against Threat of Terrorism | "It is absolutely essential for the world to unite against terrorism as it remains the biggest threat to the world. India has contributed vehemently to the UN Peace keeping forces. We have the authority and the will to warn the world against terrorism," Says PM Modi.

"While I was coming here, I read on the walls of the United Nations "No more single use plastic". I am delighted to inform you that we are running a big campaign in India to free the country of single use plastic," says PM Modi. 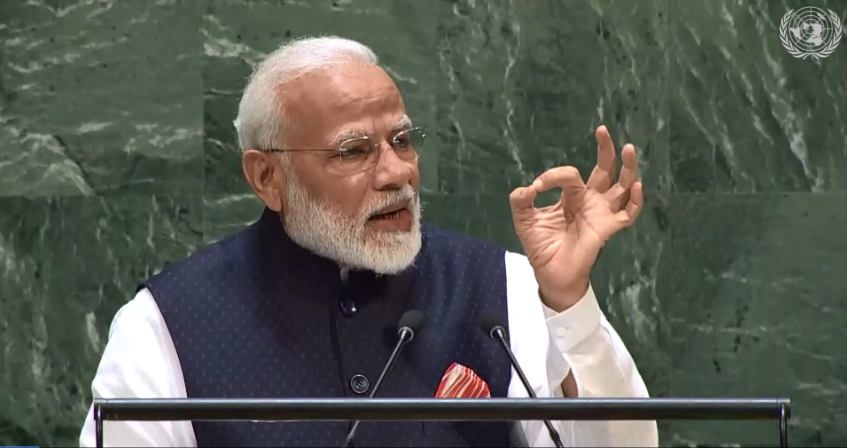 Invoking 'Sabka Sath Sabka Vikas' slogan at UN General Assembly, Prime Minister Narendra Modi says this has been the inspiration of his government, adding that India's development story can inspire other nations too.

"In the coming 5 years, we will connect 15 crore people with running water supply. 1.15 lakh km of additional roads will be constructed. In 2022, India will complete 75 years of independence and we will build 2 crore more houses for poor people by then. By 2025, We also intend to rid india of tuberculosis," PM Modi says while addressing the UN General Assembly.

Speaking at the UNGA, PM Modi says India completed the world's biggest cleanliness programme within 5 months and built 11 crore toilets in the country.

PM Modi has begun his address at the UN General Assembly.

Thomas Motsoahae Thabane, Prime Minister of Kingdom of Lesotho stresses upon the importance of Paris climate agreement. "I urge leaders to refrain from boycotting the Paris climate agreement. At this defining moment, we do not want to spoil the collective efforts we have taken so far towards climate change. The involvement of youth in fighting against climate change is a step in the right direction," he said.

Thomas Motsoahae Thabane, Prime Minister of Kingdom of Lesotho is now addressing the UN General Assembly. He emphasizes the importance of the theme of this years UNGA. 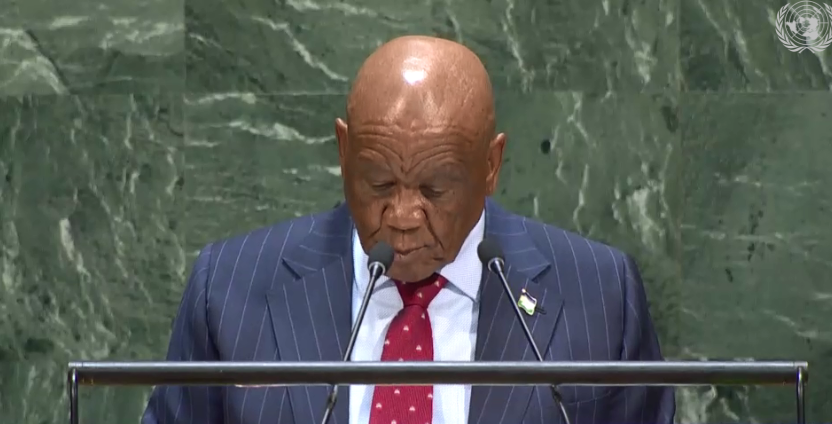 World leaders have started arriving to attend the 74th session of the UN General Assembly. 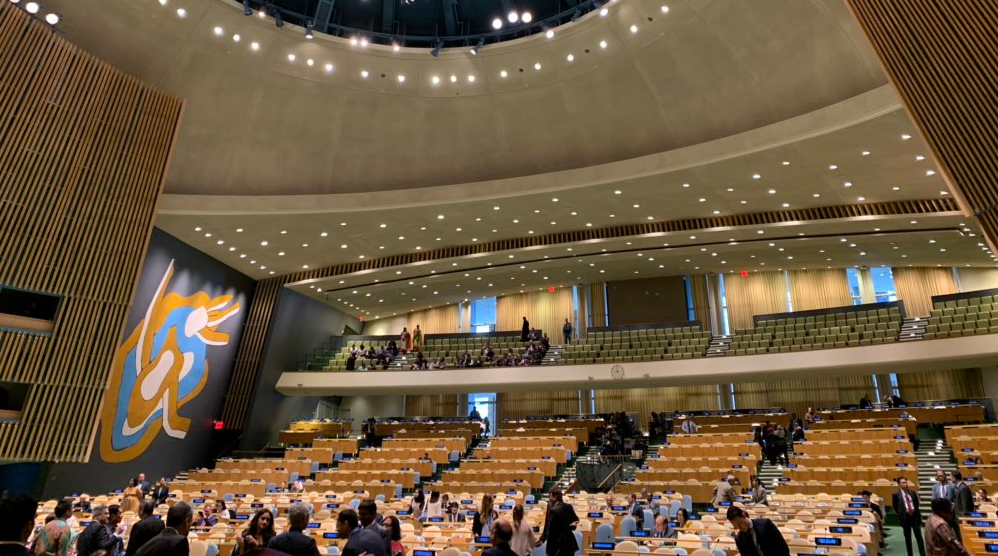 PM Modi's speech at the UN General Assembly is set to begin shortly.

All set for the @UN General Assembly session!

The speech of PM @narendramodi begins shortly. Do watch it LIVE. pic.twitter.com/63fWbgG0b7

Tensions Flaring up Between India and Pakistan in New York | On Thursday, tensions between India and Pakistan flared-up once again after Pakistan Foreign Minister Shah Mahmood Qureshi boycotted External Affairs Minister S Jaishankar's opening statement at the meeting of the SAARC Council of Foreign Ministers, saying his country will not engage with India "until and unless" it lifts the "siege" in Kashmir. Read the full copy.

When Will PM Modi Address the UN General Assembly? | PM Modi has been listed as the fourth speaker, who will address the UNGA today. The proceedings are slated to begin at 9 am local time in New York (6.30 pm IST) and Modi's turn to speak is likely to come between 7.30pm and 8.30pm. Pakistan PM Imran Khan is expected to speak after Modi.

What is The Theme of This Year's UN General Assembly? | "Galvanising multilateral efforts for poverty eradication, quality education, climate action and inclusion" is this year's theme at the 74th session of the UN General Assembly in New York.

What Will PM Modi Discuss During His Address to The UN General Assembly? | Foreign Secretary Vijay Gokhale said the Prime Minister "will focus on what the high-level segment of the UNGA is meant to focus on which is - as an important economy, as an important country, as a responsible member of the UN - PM will flag what we are doing for development, for security, for peace and our expectations and aspirations of other countries".

Pakistan PM Imran Khan to Address UN General Assembly after PM Modi | Pakistan Prime Minister Imran Khan will address the UN General Assembly today. Khan has said that he will "forcefully present the Kashmir issue like never before" in his address at the UNGA session. Pakistan has been trying to internationalise the Kashmir issue after India withdrew the special status of Jammu and Kashmir on August 5, but New Delhi has asserted the abrogation of Article 370 was its "internal matter".

PM Modi Set to Speak at UN General Assembly | Prime Minister Narendra Modi will address the 74th session of the UN General Assembly on Friday during which his focus is likely to be on the issues such as development, security, counter terrorism and climate change. Modi is expected to refrain from bringing up the Kashmir contention during his speech, while Pakistan PM, Imran Khan, who is scheduled to speak after Modi, has vowed to “forcefully present” it before the Assembly.

The speech also highlighted the reform agenda of his government, as the PM spoke at length about actions taken to tackle climate change, as well as health and cleanliness initiatives.

His address was just a short while before his Pakistani counterpart Imran Khan, who is expected to speak around 9pm IST. The speech came amid heightened tensions between India and Pakistan on the Kashmir issue. It capped an eventful week for Prime Minister Modi in the United States, during which he held a number of bilateral meetings with top world leaders like US President Donald Trump and German Chancellor Angela Merkel.

The Prime Minister addressed the General Assembly in Hindi. "Galvanising multilateral efforts for poverty eradication, quality education, climate action and inclusion" is this year's theme at the 74th session of the UN General Assembly.

Since its participation as a founding member of the UN in 1945, India has shown unwavering commitment to multilateralism to advance peace and security and promote broad-based inclusive economic growth and development in the world, the prime minister said last week in his departure statement.

"There are many pressing challenges for the international community -- a still fragile global economy, turbulence and tension in many parts of the world, growth and spread of terrorism, climate change and the endemic global challenge of poverty.

"They require stronger global commitment and concerted multilateral action. I will reiterate our commitment to reformed multilateralism, which is responsive, effective and inclusive, and in which India plays her due role," Modi had said in his departure statement last week.

Pakistan Prime Minister Imran Khan will also address the UN General Assembly on Friday. While Modi is the fourth speaker for the day, Khan is the seventh. Khan has said that he will "forcefully present the Kashmir issue like never before" in his address at the UNGA session.

Pakistan has been trying to internationalise the Kashmir issue after India withdrew the special status of Jammu and Kashmir on August 5, but New Delhi has asserted the abrogation of Article 370 was its "internal matter".

"If they (Pakistan) wish to dwell on this issue in the speech by their Prime Minister, they are welcome to do so," Gokhale had said. "Article 370 is an internal issue, there will be no discussion on it in the UN, we will have no discussion on it," he said last week in response to a question.