The two leaders agreed that China and India should respect and learn from each other so as to jointly achieve common development and prosperity.

Mamallapuram: A new era of cooperation will start between India and China on Saturday with the "Chennai connect", Prime Minister Narendra Modi said after around five-and-half hours of one-on-one talks with Chinese President Xi Jinping spread over two days in this ancient coastal town as part of the second informal summit.

Xi said their "candid", "heart-to-heart" discussions on bilateral relations were "in-depth" and "good", noting that maintaining and expanding the Sino-India relations is a firm policy of his government.

The opening remarks by the two leaders at the delegation-level talks are seen as a clear reflection of attempts to recalibrate ties that were strained following India's decision to withdraw special status of Jammu and Kashmir.

"The Wuhan spirit gave a new momentum and trust to our relations. Today, our Chennai Connect will lead to the start of a new era of cooperation between the two countries," Modi said, referring to the outcome of the first informal summit between the two leaders at Chinese city of Wuhan in April last year. Modi said the Wuhan summit led to increased stability and fresh momentum in Sino-India relations as strategic communication increased between the two sides. “We had decided that we will prudently manage our differences, and not allow them to become disputes, we will remain sensitive about each other's concerns and that our relations will lead to peace and stability across the world.

"These are our big achievements and these will inspire us to do more in future, Modi said.

"What has happened has proved that we made the right decision to have this kind of informal summit and we can well continue with this form of meeting,” the Chinese leader said. 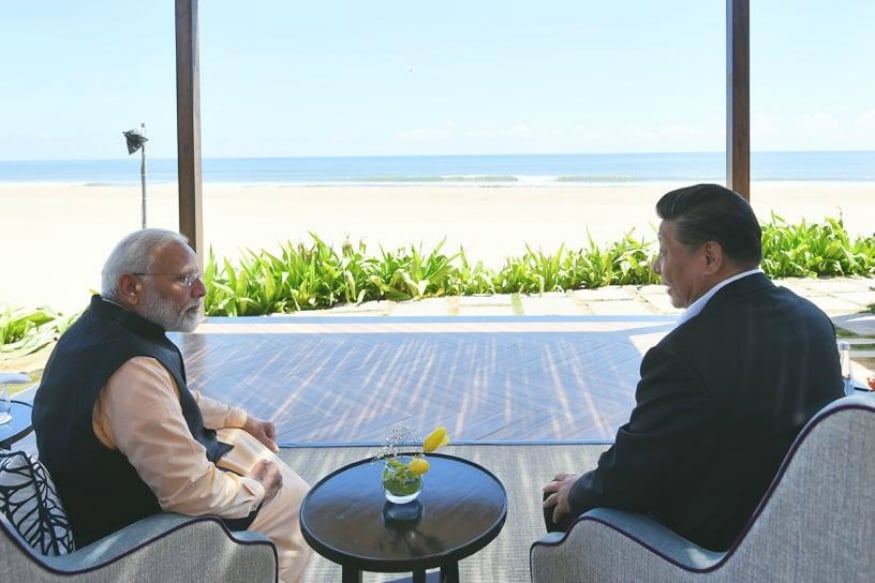 Xi said: “Yesterday and early today, Mr Prime Minister, as you said, you and I have engaged in candid discussions as friends. In this heart-to-heart discussions on bilateral relations, we've had really in-depth engagements and good discussions.”

After the talks, Modi tweeted that he had productive deliberations on further improving India-China relations.

Before the delegation level talks, Xi and Modi held a one-on-one discussion lasting about an hour at the Fisherman's Cove resort, sending a clear signal of an intent to refashion ties for greater bilateral cooperation.

The two leaders also took a stroll along the beach front and were seen having an engaging discussion. Earlier, Modi and Xi came together to the venue in a golf cart. Xi left Mamallapuram at around 12:45 pm for Chennai airport, wrapping up the nearly 24-hour trip.

The Chinese President arrived here in this bustling port city on Friday amid strain in bilateral ties between the two countries after India withdrew Jammu and Kashmir's special status and bifurcated the state into two union territories.

On Friday, Modi and Xi held a two-and-half-hour open and cordial one-on-one discussion over dinner, vowing to jointly combat terrorism and radicalisation, and expand bilateral trade and investment.

The meeting at the magnificent Shore temple complex under a sea-facing colourful tent went beyond the scheduled time as both leader touched upon a range of issues over sumptuous local delicacies. 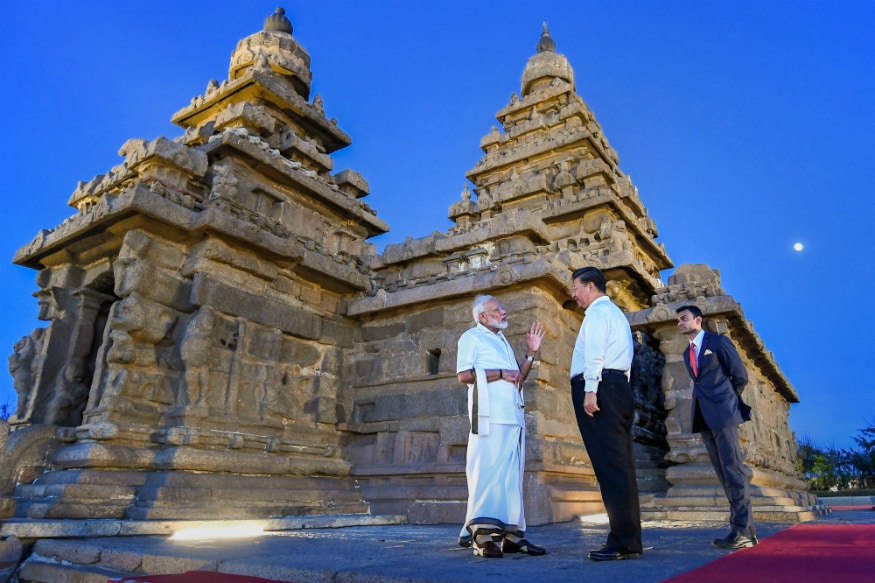 "This was quality time that the two leaders spent together one-on-one,” Foreign Secretary Vijay Gokhale had said after the meeting, adding the leaders agreed to work together so that radicalisation and terrorism do not affect the multi-cultural, multi-ethnic and multi-religious societies of the two nations.

He said the two leaders also deliberated on trade and economic issues with a focus on identifying new areas for investment and enhancing trade volume and value of two-way trade. The issue of trade deficit and trade imbalance was also discussed, the foreign secretary said.

Addressing a press meet, Gokhale said President Xi has said that China is ready to take concrete measures to reduce trade deficit. Building on the 'Wuhan spirit', the prime minister spoke of "Chennai connect" for a new era of cooperation between India and China, he said.

Gokhale said a new mechanism will be set up for issues relating to trade and investment. President Xi has assured that India's concerns over Regional Comprehensive Economic Partnership (RCEP) will be discussed, he said.

Both Modi and Xi emphasised on importance of having rules-based global trading system, he said, both leaders felt that the two countries should cooperate on important regional and global issues. Xi also talked about the need for enhancing defence cooperation, Gokhale said.

Both Xi and Modi said the two countries need to look to the future. The two leaders agreed that both countries should work together to deal with the challenge of terrorism, Gokhale said. Replying to a query, he said Kashmir issue was not raised and discussed at the informal summit.

Earlier on Friday afternoon, Modi, dressed in a Tamil attire of Veshti (Dhoti), white shirt and an angavastram', took Xi for a guided tour of the famous world heritage sites of Arjuna's Penance, Krishna's Butterball, the Pancha Ratha and Shore temple in this ancient temple town, kicking off the second informal summit between the two leaders.

The free flowing nature of the informal summit at the UNESCO world heritage site will continue and deepen contacts at the highest level and guide the future trajectory of India-China relationship, MEA Spokesperson Raveesh Kumar said.

"It is anticipated that this unilateral liberalisation of e-TV for Chinese nationals will further enhance people-to-people exchanges between the two countries and encourage more Chinese tourists to choose India as a destination for tourism purposes," the Indian embassy in Beijing said in a press release.

China's state run Xinhua news agency reported that Xi and Modi agreed to promote exchanges and mutual learning among civilizations to achieve joint development and prosperity during their meeting on Friday. 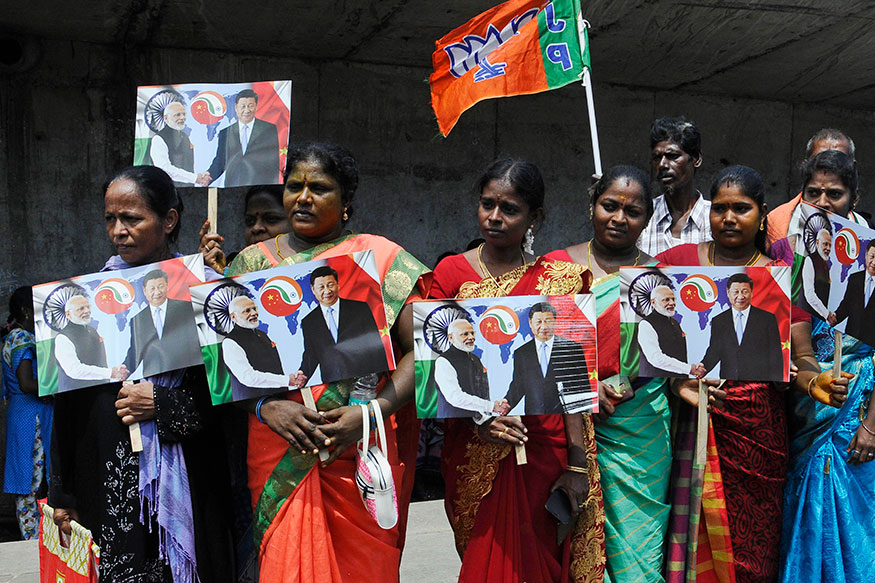 As he toured the monuments at Mamallapuram with Modi, Xi said Tamil Nadu, a maritime transit hub for cargoes in the ancient Silk Road, has a long history of exchanges with China and close connections with China on maritime trade since ancient times.

Both as ancient civilizations with several thousand years of history, China and India have carried on their exchanges and mutual learning till this day, Xinhua quoted Xi as saying.

The two countries' ancestors have overcome various obstacles to carry out extensive exchanges and promote the development of literature, art, philosophy and religion, which have greatly benefited both sides, Xi said.

Modi told Xi that the Group of Monuments at Mamallapuram is an outstanding example of India's cultural heritage and architecture, and witnessed India and China's civilization exchanges and historical connections for more than a dozen centuries.

After their development for several thousand years, India and China have both become important emerging economies, Modi said, stressing that enhancing exchanges and cooperation bears great significance to the two countries and will promote global progress and prosperity.

The wisdom from the two countries' ancient and profound civilizations can provide inspiration for solving various challenges facing the world today, Xinhua quoted him as saying.

In the Shore Temple on the coast of the Indian Ocean, Xi and Modi talked about the domestic development of China and India and exchanged experience in state governance, it said.

The two leaders agreed that China and India should respect and learn from each other so as to jointly achieve common development and prosperity, as well as the great rejuvenation of the two civilizations, it said. Xi's visit to India came two days after he held talks with Pakistan Prime Minister Imran Khan in Beijing. After the talks, a joint statement said China is paying close attention" to the situation in Kashmir and that the issue should be properly and peacefully resolved based on the UN Charter. The comments evoked sharp reaction from New Delhi.

Officials on both sides said the focus of the Modi-Xi summit has been to move forward and chart a new pathway of development notwithstanding sharp differences between the two countries over several contentious issues.