The launch of the revamped service, along with new uniforms for the crew and cuisine, came in an eventful week when the government decided to put the brakes, for now, on the disinvestment plans for the loss-making state-run carrier.

New Delhi: Air India on Friday unveiled the revamped first class and business class in its fleet of Boeing aircraft flying to international destinations to woo high-end travellers and increase the occupancy from 60 per cent to over 80 per cent.

The launch of the revamped service, along with new uniforms for the crew and cuisine, came in an eventful week when the government decided to put the brakes, for now, on the disinvestment plans for the loss-making state-run carrier.

The revamped premium class has been christened as "MaharajahDirect" and the airline is expecting to boost its revenue to Rs 6.5 crore per day from the existing Rs 4 crore it nets from these premium classes. Air India, known for its Maharaja mascot, is saddled with about $7 billion of debt.

At present, the airline has a 17-per cent market share on international routes. It has over 2,500 international prime-time slots per week, spread across 43 overseas destinations. "Passengers will get a much better experience for the same money they were paying earlier. They are not going to be charged anything extra," Civil Aviation Secretary RN Choubey said at the unveiling of "MaharajahDirect".

He added that following the upgradation, the revenue of Air India was expected to go up by about 20 per cent.

On the occasion, Civil Aviation Minister Suresh Prabhu said, "The government is committed to making Air India a far better company than what it is today."

He added that while the airline and its staff had little control over its financial and legacy issues, they could certainly improve the delivery of services and do wonders for the airline.

Minister of State for Civil Aviation Jayant Sinha also spoke on the occasion. 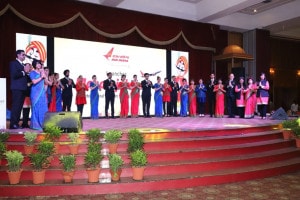 Air India Chairman and Managing Director (CMD) Pradeep Singh Kharola said the existing first-class and business-class seats in its fleet of Boeing 777 aircraft flying to destinations such as the US would be upgraded by July-end, while the upgradation of the Boeing 787 aircraft, which mostly fly to European destinations, will take another month.

Passengers travelling in the upgraded premium class will get a feel of the new ambience and provided with better upholstery, better nightwear, woollen blankets and travel kits, a statement from the airline said, adding that ipads will also be made available for personal viewing.

The cabin crew will sport a new uniform — a mix of traditional and western attire.

The passengers will also be treated to delicious gourmet food and region-specific beverages — both alcoholic and non-alcoholic.

These changes, expected to be introduced over the next two months, could earn the airline an additional 10 billion rupees ($147 million) a year in revenue, Air India's chairman and managing director Pradeep Singh Kharola told reporters.

Air India currently fills only 60 percent of the business and first class seats on its international flights to North America and Europe and the changes are expected to increase the so-called load factor to 80 percent, Kharola said at the event.