It's a sad day. Veteran Bollywood actor Shashi Kapoor, the romantic screen icon of the 70s and early 80s who immortalised the line "Mere paas Maa hain", has passed away. Here are some of the rare and unseen images of the legendary actor. Kapoor was the face of songs that are still evergreen favourites on FM stations. Here are some of the best songs he featured in. 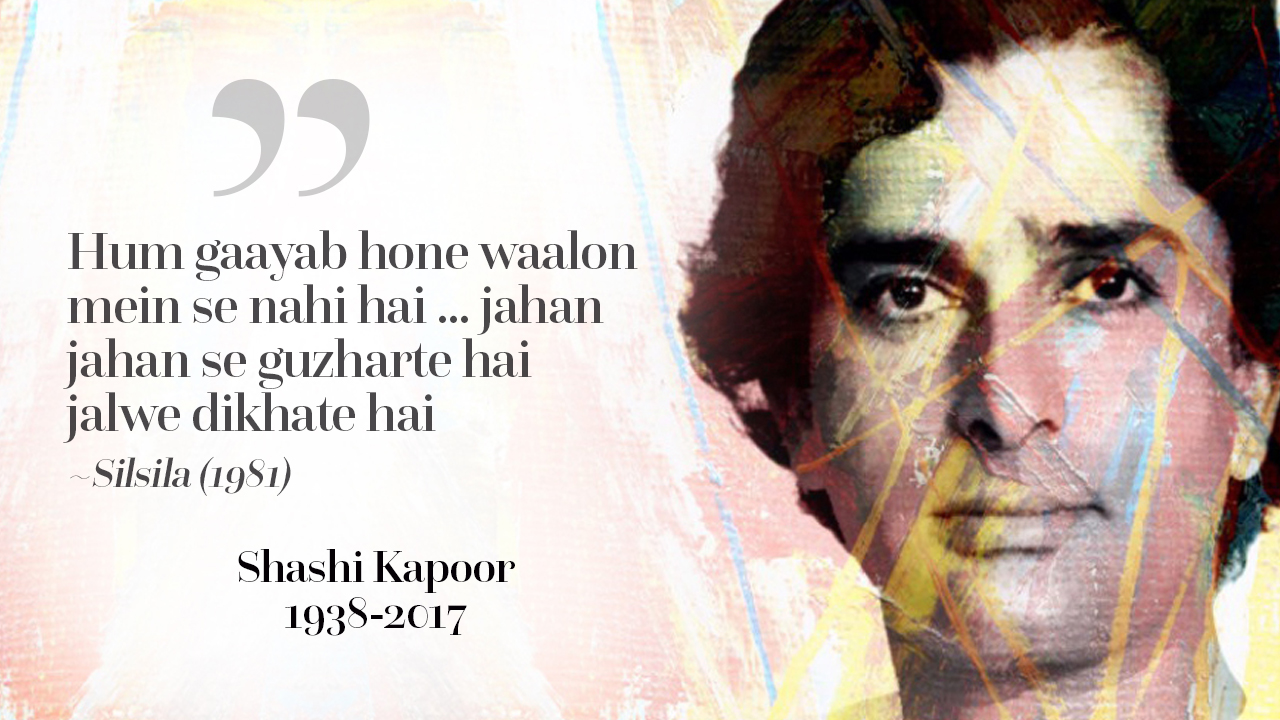 Senior Congress leader Mani Shankar Aiyar invoked rulers of the Mughal dynasty to defend Rahul Gandhi's elevation as party chief. "When Shah Jahan came in the place of Jahangir did any election happen? And when Aurangzeb came in place of Shah Jahan did any election happen? It was known to everyone that the throne of the king will automatically go to the heir." Uh oh, Mr Aiyar. Obviously, PM Modi used Aiyar's remarks to attack Rahul Gandhi at an election rally in Gujarat.

Schools and colleges in Mumbai adjoining districts will remain closed today as a precaution after the Met department predicted heavy rain and thunderstorms as Cyclone Ockhi heads to the country's west coast.

The Poonawallas are no strangers to national politics. Or to the national politics on social media. What started off as a young Congress leader denouncing his party's ways of electing its leader ended up with two brothers washing their dirty linen in public, something that Prime Minister Narendra Modi took note of. For the PM to mention the Congress leader in his election rally was a shot in the arm for Shehzad who further went on to accuse the party of allotting a dummy candidate against Gandhi and also spoke about a secret audio tape. Shehzad has been at it since being praised by Modi. But who exactly are the Poonwalla brothers, who seem to have broken the internet and the current political scene in the country with their personal differences? Here's a quick check. The report, "Minority Appeasement – A Myth or a Reality? A Ground Report on Minority Welfare in 7 States", has stated that Gujarat has allocated the least funds to minorities — Rs 51.44 crore in 2017-18. In contrast, the highest allocation was at Rs 3,470.78 crore by West Bengal, where its Chief Minister Mamata Banerjee is often criticised for her "minority appeasement politics" by the opposition members.

What is it like to be on India's largest warship — INS Vikramaditya? Commanding Officer of INS Vikramaditya Captain Ajay Kochhar and fighter pilot of MiG 29 Abhijit Bhute talk about the thrills of being on-board the 45,400-tonne warship.

The first death anniversary of former chief minister J Jayalalithaa is set to turn into a battleground for the warring factions in the AIADMK. Rebel leader TTV Dhinakaran, O Panneerselam and Edappadi K Palaniswami-led ruling group is planning to take out a silent procession in the morning.

Can a temple for Lord Ram be built in Ayodhya at the site where Babri Masjid was razed? This will be taken up by the Supreme Court today.

Tiger Woods made a comeback in The Hero World Challenge after 10 months. Among the elated crowd was Rafael Nadal. Check this out.