News18.com Daybreak | Gujarat, Himachal Election Results and Other Stories You May Have Missed

BJP President Amit Shah flashes victory sign as he is accorded warm welcome on his arrival at the party headquarters in New Delhi on Monday, after the party's victory in the Assembly elections in Gujarat and Himachal Pradesh (PTI Photo)

The BJP has won both in Gujarat and Himachal Pradesh, but there were too many lessons to learn from this election.

With Bharatiya Janata Party (BJP) back in power for the sixth straight term in Gujarat and taking Himachal away from the Congress, the party now controls 19 of the 29 states. Never before has any political party controlled as many states in India. Congress, 24 years ago, was the last time a political party was in control of 18 states. Addressing BJP workers at the party headquarters in Delhi, PM Modi said that the verdict in the two states is a backing for the Good and Service Tax (GST). “In the history of BJP it’s an unprecedented election. Political parties nowadays find it difficult to win after 5 years. But Gujarat is an exception. Gujarat wins every election since past 22 years,” he said. He ended the speech with the slogan of “jeetega bhai jeetega, vikas hi jeetega”. In a 30-minute speech, Modi used the word ‘Vikas’ 25 times.

With 99 seats in the 182-member assembly, the BJP will now form its sixth straight government in Gujarat. Chief Minister Vijay Rupani won with a margin of more than 54,000 votes in Rajkot West, while deputy CM Nitin Patel emerged victorious in Mehsana. Dalit leader Jignesh Mevani has won his maiden election from Vadgam constituency. 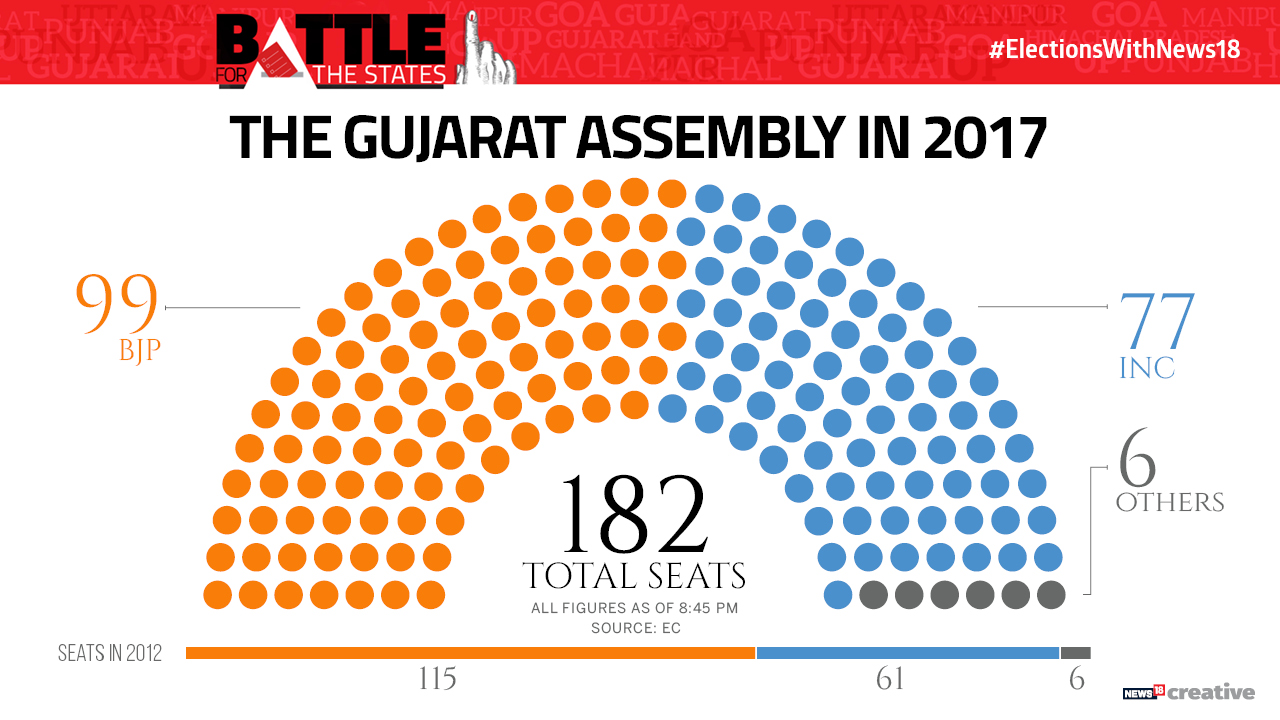 In Himachal Pradesh, the BJP coasted to a comfortable win, getting 44 out of the 68 assembly seats. Here’s a look at all the election coverage of News18.com

Narendra Modi still rules polling booths, but Rahul Gandhi’s challenge is now for real. Next year, the party will face elections in some big states like Karnataka, Madhya Pradesh, Rajasthan and Chattisgarh. Just like Gujarat, Congress is pitted against the BJP in all these provinces. 2018 promises to be an interesting year for politics.

The small margin of victory was a big wake-up call for Narendrabhai-Amitbhai, in that it was so very hard won. For the very first time, the Congress has shown signs of revival and party workers have reason to regard Rahul Gandhi as a credible leader rather than an abject failure, which bodes well for the future. Over to Karnataka. For Modi, the signal is even clearer. Proceed, but with extreme caution.

As the Congress led by Rahul Gandhi inched towards 80 seats, Karnataka Chief Minister Siddaramaiah had a smile on his face. He told the party leaders and workers around him that they must win Karnataka once again as the ‘Modi Magic’ is on the wane in his home state. After the Gujarat results, the action is shifting to Karnataka.

It was an impressive fight by Rahul Gandhi, but his party fell short of a victory. So close, yet so far is not the way Indian political narratives are written. So what did Rahul miss in his Gujarat campaign? A strong regional satrap.

One area where the BJP’s magic did not work was the Prime Minister’s own hometown of Vadnagar. Here’s why.

Did BJP President's management tips help win Gujarat election? BJP President Amit Shah, the architect of the party's 6th victory in the Gujarat Assembly Elections, talks about his mantras in this News18.com exclusive.

The Gujarat election result reminded us of the latest instalment of Star Wars: ‘The Last Jedi’. Why, you ask? Find out here.