News18.com Daybreak | Who Will Form Govt in Karnataka and Other Stories You May Have Missed

The results for 224 seats that went to the polls in a single phase for the Karnataka Assembly Elections 2018 was announced on Tuesday. The Bharatiya Janata Party emerged as the party with the highest votes and a 104 seats but failed to form a government as it fell seven seats short of the halfway mark of 111 seats required to win by simple majority. Congress and Janata Dal (Secular) have sought to form a coalition government in the state with 78 and 38 seats each. Congress chose to support the JD(s)’s claim to form a government.

But it isn't over till it's over.

What can happen in Karnataka now? Read all the possible outcomes here.

Read the full, blow-by-blow coverage of the #KarnatakaElectionResults2018 here.

All eyes are now trained on Karnataka Governor Vajuvai Vala, who came to power in 2014 after BJP won the General Assembly elections. In case of a hung election, the responsibility of picking the government falls on the Governor.

Both the BJP, which is seven short of the halfway mark of 111 out of the 222 contested seats, and the Congress-JDS combine, which has a combined tally of 118, have staked to form the government in the state. And both have argued that the Governor should invite them to prove the majority first as the law is on their side.  While the BJP cited Supreme Court verdicts that say the party with the largest number of MLAs should be invited to form the government in the event of a fractured election result first, the Congress relied upon the recent examples of Meghalaya, Goa and Manipur, all three states where it had emerged as the single largest party but was not invited first because the BJP cobbled up the required numbers with a coalition first. Vala, who has met leaders from both parties, said he will wait for the Election Commission to decide on the matter. The ball now lies in the court of the Election Commission. Will it side with Constitutional convention? Or pick the recent Goa-Meghalaya model? Here's what experts think.

The Karnataka results were largely in tune with the exit polls, with most expected candidates winning from their respective constituencies. The incumbent Chief Minister Siddaramaiah resigned after losing Chamundeshwar to JD(S) chief Deve Gowda, though he won in Bellary, albeit with a narrow margin. 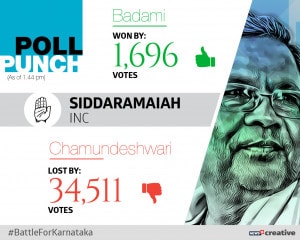 BJP’s CM candidate BS Yeddyurappa and JD(S) state Chief HD Kumaraswamy have won from Shikaripura and Ramanagaram, respectively. Election Commission website shows that more than 20 seats have a vote margin of less than 2,000 votes. Read the full list of all the winning candidates across the three parties.

The constituency-wise coverage, is here.

Run Up to 2019: While the BJP may have fallen short of the majority mark in Karnataka, its emergence as the single largest party leaving the Congress far behind has reaffirmed its dominant position on the country's political map in the run up to the 2019 elections.

Vote Share: The Congress got lesser seats than the BJP though its vote share was nearly two percentage points higher than that garnered by the saffron party in the bitterly fought Karnataka Assembly polls.

Congress Strategy: Learning from past mistakes, the Congress today moved swiftly to remain in the game as it extended support to JD(S) to form a government in Karnataka after the BJP failed to get a simple majority. The move is seen as an attempt by the beleaguered party to save yet another state from slipping out of its kitty. The Congress currently rules Punjab, Mizoram and Puducherry. It has said that if the Governor does not invite its alliance with JD(S) to form a government, the party will move to court.

The Lingayat factor: BJP leaders were allegedly in touch with ‘unhappy’ Lingayat MLAs in the Congress. If given a choice between Kumaraswamy and Yeddyurappa, Lingayat MLAs are more likely to go with Yeddyurappa who is a prominent face of the Lingayat community. The BJP has decided to not put pressure on the EC or the Governor but rather to wait and watch.

In other news, The West Bengal State Election Commission (SEC) on Tuesday ordered repolling in 568 booths following complaints of violence during the pancahayat polls held on Monday. The response comes after statewide violence on the day of polling for the gram panchayat elections in West Bengal.

A portion of an under-construction flyover collapsed in Varanasi cantonment area on Tuesday. Rescue teams have pulled out 18 bodies so far while as many as fifty others are still feared trapped under the collapsed structure.

The sweetness of the BJP's triumph in Karnataka has been diluted by a small shortfall in numbers, thereby affording the Congress-backed Janata Dal(S) an opportunity to stake its claim. Regardless, the party's seventh consecutive electoral success (not counting the presidential election) will doubtless underscore the storied invincibility of the Modi-Shah duo and give them added traction in the general elections. Having put Siddaramaiah out to pasture, former prime minister H D Deve Gowda's next step would be to checkmate the man he once publicly dubbed as a “b___” - BS Yeddyurappa - the BJP chief ministerial candidate, who is near and yet so far from a simple majority.

With the BJP falling short of the halfway mark by eight seats, the Congress has offered to support a Janata Dal (Secular)-led government in Karnataka to keep the saffron party out of power. But can the Congress-JD(S) combine actually keep the single largest party away? What would be the role of the Governor now?