News18 Daybreak | SC Hearing on Section 377, Thai Cave Boys Rescued and Other Stories You May Have Missed

Unsure notes: After rejecting the centre’s efforts to defer the proceedings, the Supreme Court on Tuesday started hearing a clutch of petitions in favour of decriminalizing Section 377 of the IPC. However, Attorney General KK Venugopal refused to appear for the central government in the high-profile challenge to the constitutional validity of section 377 citing that he had earlier argued in a curative petition against the Supreme Court’s previous verdict upholding the legality of the same. Ripple effect: The murder of gangster Munna Bajrangi inside Baghpat district jail in Uttar Pradesh on Monday raised serious questions on the law and order situation of the state and the jail administration. But at the same time it also seems to have revived the gang war which was probably lying low for almost a ecade now.

Chief displeased: Bengal chief minister Mamata Banerjee expressed her displeasure over the functioning of the Murshidabad district administration for their failure to get leads about five Chinese drug smugglers who managed to set up a ‘drug factory’ over a large chunk of land with the help of a local panchayat leader. During the administrative meeting at Cooch Behar on Tuesday, Banerjee expressed shock over the way the factory was running in the district unnoticed.

Fantastic rescue: Twelve boys and their football coach who were trapped in a cave in northern Thailand for more than a fortnight were all rescued in an unprecedented three-day mission that had all the features of a blockbuster film. The complex effort to get the "Wild Boars" out of the Tham Luang cave ended on Tuesday in success after meticulous planning, cooperation and no small amount of luck. 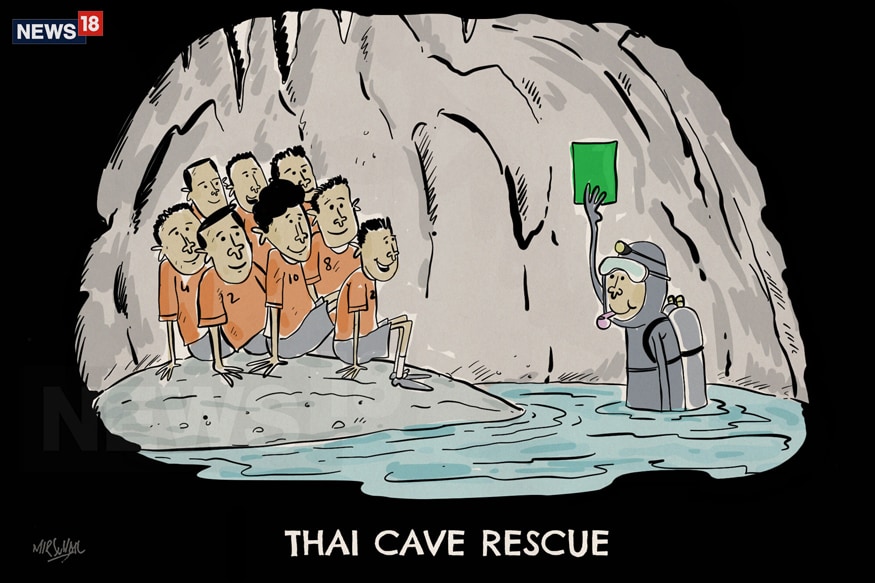 Payment woes: Superstar Rajinikanth's wife Latha Rajinikanth will have to face a trial in a cheating case, the Supreme Court ruled on Tuesday. A bench headed by Justice Ranjan Gogoi set aside the Karnataka High Court order, which had quashed a private complaint against Latha over non-repayment of a loan.

Exercising control: The Jammu and Kashmir administration initiated a departmental inquiry against 2010 batch IAS officer Shah Faesal, at the behest of the Union government over a “sarcastic tweet” he had written against the apparent “rape culture” prevailing in the country.

Babies for sale: Jharkhand Chief Minister Raghubar Das on Tuesday ordered a probe into the alleged baby selling racket in the state after one of the shelter homes of Saint Teresa’s charitable trust was found at the centre of the alleged racket of selling babies that are born to unmarried women. The CM called a high-level meeting to discuss the matter and directed the Social Welfare Department and Commission for Protection of Child Rights to start a detailed investigation into the case and submit reports within fifteen days.

Disaster averted: Around 2,000 passengers of two Mumbai-bound trains that got stuck between Nallasopara and Vasai stations of the Western Railway due to water-logging on Tuesday morning were rescued by the NDRF and the police. In a joint operation, the National Disaster Response Force (NDRF), the police and fire brigade personnel rescued all the passengers of Shatabdi Express and Vadodara Express. Surprise switch: Superstar forward Cristiano Ronaldo is all set to join Italian champions Juventus after the club agreed to the transfer terms with Real Madrid. The European champions will be richer by €100m from this transfer. The Portuguese captain, who spent nine years at Real Madrid is ready for a new challenge after his agent Jorge Mendes, met the Juventus chairman Andrea Agnelli in Greece on Tuesday to discuss the details of the deal.

Unusual bust: The Kolkata unit of the Narcotics Control Bureau (NCB) arrested a Nigerian woman on Monday on charges of carrying drugs. The woman was allegedly concealing LSD blots and cocaine in her private parts.

Yama on roads: Bengaluru city police are known to have been wooing millennials with their memes and references to popular series on their social media space. But this time, the city's traffic police travelled backwards in time - they brought in Yama, the Hindu god of death to spread road safety awareness in the city.

Ghost college: Multi-acre, sprawling campuses with lush green fields, intimidating buildings and state-of-the-art equipment. This would have been a perfect fit for a marketing brochure, but this ideal modern-day colleges have the most essential parameter missing — students. Once bustling with activity, the Institute of Information Technology and Management (IITM), spread across 12 acres, now stands lonely in Silani village of Sohna, Haryana. Read News18’s exclusive report the ghost colleges of India.

Ostracized from home: The family which hosted the most known Kashmir militant on his last night was subjected to the wrath of the mob which has framed betrayal charges against the family. Watch the video to find out more about how the family was ostracized, their house burned down and more.

"Imploding roads, shriveled plastic clogging the drainage network, leaking trains, crumbling buildings and the smell of catastrophe brewing in the sea characterize the city's rains as people momentarily amass amid and away from swathes of flooded water. Every monsoon, half of the cityscape is inundated, people stranded and trains and taxis come to a halt, much like the city's administration." - Read Zoya Mateen’s take on Mumbai’s ‘indomitable spirit’ and how it may just be a bane and not a boon.

An abhorrent test conducted at the Psychiatry Department of All India Institute of Medical Sciences (AIIMS) claimed to have successfully 'converted' homosexual persons to heterosexual persons with shock therapy. The results were published in the Indian Journal of Psychiatry in 1983. India has no laws preventing 'gay conversion', or the medical attempt to change a homosexual person's sexual orientation. Watch the video to find out more.