The Supreme Court on Monday is likely to hear a clutch of petitions challenging the validity of Article 35-A, concerned with the special rights and privileges accorded to the “permanent residents” of Jammu and Kashmir. The provision also empowers the state’s legislature to define the “permanent resident” of the state, which in turn allows them to own property, apply for government jobs and settle down in the state.

The J&K government is however still seeking for an adjournment on the hearing saying that their “stand remains the same” on the February 11 request.

Boiling over: Tensions remain heightened in the Valley in the past few days, following the Pulwama terror attack which left 40 CRPF personnel dead. The Centre on Saturday rushed in 100 additional companies of paramilitary forces on an ‘urgent’ basis and launched a massive crackdown on separatist leaders. The Ministry of Home affairs has ordered for the additional deployment of 100 companies (nearly 10,000 troops) of paramilitary forces, which includes 5 companies of CRPF, 35 from BSF and 10 each from SSB and ITBP.

As the panic spread from the crackdowns, people were seen thronging petrol stations and provision shops and buying essential supplies. The Department of Food, Civil Supplies and Consumer Affairs, which provides ration to people through its outlets, also directed its staff members in south Srinagar to ensure completing sale of food grains in their respective areas by Saturday evening.

Search continues: Meanwhile, three Jaish-e-Mohammed militants were killed in an encounter on Sunday, which also claimed the lives of a police officer and an army jawan. The shootout occurred in Kulgam district's Turigam village. It was a suicide bomber of the Pakistan-based terror outfit who was responsible for the February 14 attack on the CRPF convoy. The joint team of Army, CRPF and Special Operation Group (SOG) had launched a cordon-and-search operation in Turigam village of Kulgam after receiving inputs of the presence of militants in the area.

Safety first: Fear has not only gripped those living inside the valley, but Kashmiri residents living outside have also been in a state of panic over the spate of targeted attacks. The Centre late on Friday night asked all states to ensure the security of people belonging to Jammu and Kashmir amid reports that some of them were attacked in different parts of the country in the wake of the Pulwama terror attack. Breaking his long silence on the harassment and attacks against Kashmiris in the country, PM Modi said, “Our fight is against terror, not Kashmir or Kashmiris”.

As violent protests grip Arunachal Pradesh, Union minister Kiren Rijiju said on Sunday the state government has decided to not accept the recommendations of a high-level committee to grant a permanent resident certificate (PRC)s to six communities and blamed the Congress for "instigating" a section of people. Widespread violence has been reported in the state capital Itanagar and other places, leading to the death of at least two persons, injury to several and destruction of properties and vehicles. The central government has dispatched 1,000 paramilitary personnel to the state to help the administration in maintaining law and order. "Everyone must come together without blaming each other for the sake of peace. It's very unfortunate that innocent lives were lost in the violence," Rijiju, who hails from Arunachal Pradesh, said. Oscar 2019 begins; Roma, The Favourite in list of big contenders

The 91st edition of the Oscars, cinema’s biggest awards ceremony, is underway at the iconic Dolby theatre in Los Angeles. The road to this year’s Oscars has been ridden with controversies starting from August of last year, when the academy announced plans to introduce a ‘popular’ film category but had to scrap it following a hue and cry. Then they elected to forgo a host after American comedian Kevin Hart opted out of the show within hours of being selected when he refused to apologise for his past homophobic remarks that had resurfaced on Twitter. The controversies didn’t end there, as the Academy then faced severe backlash for their decision to drop four categories from the live telecast of the show to cut down the running time, and was forced to withdraw their decision.

These are the biggest contenders for this year’s award:-

2. Yorgos Lanthimos’ The Favourite with nominations in 10 categories as well; Olivia Colman is

competing in the Best Actress in a Leading Role category, co-actresses Rachel Weisz and Emma Stone

have each received a supporting actress nomination.

3. Other heavyweights this year are Bradley Cooper’s musical-tragedy A Star Is Born and Adam McKay’s

competing for the Best Picture and the Best Director awards.

Here is a list of the nominees in all the 24 categories.

More than 140 tea garden workers in Assam died and over 300 others were hospitalized after consuming spurious liquor on Thursday. The incident, which took place at Salmara tea garden, comes less than two weeks after more than 100 people died from drinking adulterated alcohol in Uttarakhand and Uttar Pradesh. Police have so far arrested 12 people, including the owners of the illegal country-made liquor factory, in Jugibaari area near the garden. 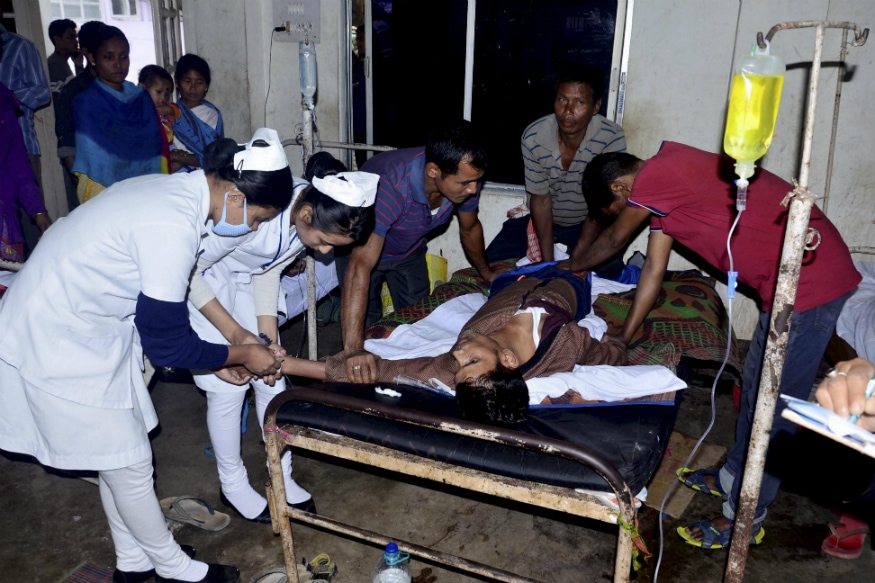 News18 Elections Lab: Why AIADMK and DMK are wooing smaller parties to rise to the top in Tamil Nadu

Last week, the DMK and Congress sealed a pre-poll alliance for the 2019 general elections. According to the seat-sharing arrangement that was decided, the Congress will contest on nine seats in Tamil Nadu and the one seat in Puducherry, while the DMK will share 30 seats with other potential allies like the MDMK and VCK.

The announcement came close on the heels of the BJP and the ruling AIADMK sealing a “ mega-alliance” in both Tamil Nadu and Puducherry, which will also include the Pattali Makkal Katchi (PMK). Rishika Pardikar explains why the state’s two biggest parties are wooing smaller parties ahead of the Lok Sabha polls.

PM Narendra Modi on Sunday launched the implementation of the Rs 75,000-crore Pradhan Mantri Kisan Samman Nidhi (PM-KISAN) scheme, included in this year’s Budget. Charting details of the Scheme, Modi said that the first instalment of Rs 2000 will be directly deposited to the bank accounts of farmers in the next few weeks. The PM on his visit to Gorakhpur and Prayagraj also took digs at the opposition parties, describing the Congress, SP and the BSP as “maha milawat” (highly adulterated). “Previous governments used to make farmers cry out for small benefits...they could never work for farmer's benefit,” he said.

The Prime Minister also made headlines yesterday for performing the Ganga Arti and washing the feet of sanitation workers during his visit to the Kumbh mela in Prayagraj.

GST on under-construction houses slashed to 5%, taxes on affordable housing lowered to 1%

GST Council on Sunday moved to slash the rates on under-construction residential houses from the current 12% to 5%. Similarly, the GST on affordable houses has been brought down to 1% against the current 8%. The announcement was made by the Finance Minister Arun Jaitley following the 33rd GST council meeting. According to the Jaitley the decision “will give a boost to housing for all and fulfil aspirations of neo/middle classes". The new tax rates will be effective from April 1.

Bangladesh commandos on Sunday killed an armed man, who made a foiled a bid to hijack a Dubai-bound flight of the state-run Biman Airlines carrying 148 passengers. All passengers on board a Dubai-bound Bangladesh Biman plane were evacuated after the plane was made to land at Chittagong airport and security forces stormed it to arrest the 25-year-old man. The “hijacker”, who had claimed that he had a pistol, was taken into custody and is being questioned. The country's civil aviation chief Nayeem Hasan said that the suspect had claimed to have a bomb, and cited the hijacker’s “psychological derangement” as the reason behind the “attack”.

Hanoi is all ready to host the second summit between Donald Trump and Kim Jong-Un. The streets have been adorned with North Korean and US flags, each pair mounted with a sign featuring a handshake. Watch News18's video to know what else is keeping the people in Hanoi busy.