Around 82% of the respondents said that their perception towards China changed after Indo-China border tensions.

News18-Piplsay Public Sentimeter on China conducted from August 3 to August 10 with a sample size of 10,000 respondents from across India across all age groups has revealed that most Indians believe the country should reduce its trade dependency on China. Around 77% of the respondents voted in favour of the same.

Also, 68% of the respondents supported the ban on Chinese apps and that "it sends out a strong message." This poll is similar to the recent Pew Research Centre survey which found that unfavourable views of China reached new historic high in the US.

Around 82% of the respondents said that their perception towards China changed after Indo-China border tensions. As many as 79% of the respondents agreed that their perception about China changed in general after the spread of the pandemic. In fact, 42% said China has created this pandemic intentionally while 37% said that they could have stopped or contained the spread of coronavirus. 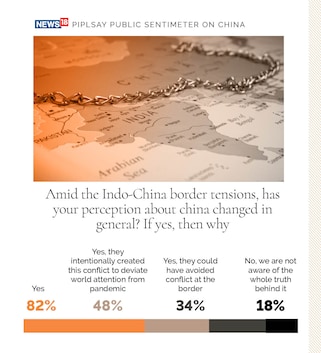 Around 51% of the respondents voted saying they have stopped buying 'made in China' products. Around 34 per cent said that China will emerge more powerful after the pandemic and will be a threat to other major economies. Also, a large majority of Indians - 84% - showed confidence in the country's leadership in combatting the twin issues of Covid-19 and Chinese aggression. The survey also revealed that Indians still consider Pakistan as the least favourable country for India in the current geopolitical situation. The respondents also voted in favour of Pakistan being the worst in handling the pandemic among India's neighbour.