News18 Wrap: India Mourns 40 CRPF Jawans Martyred in Pulwama, Curfew in Jammu & Other Stories You Might Have Missed

Forty CRPF personnel were killed and five injured on Thursday in one of the deadliest terror attacks in Jammu and Kashmir when a Jaish-e-Mohammad suicide bomber rammed a vehicle carrying over 100 kg of explosives into their bus in Pulwama district. Home Minister Rajnath Singh, along with J&K DGP Dilbagh Singh, on Friday helped carry the coffin of a slain CRPF jawan after he laid a wreath on the mortal remains of the troops who were killed. Read more.

Curfew was imposed in Jammu city following massive violence in which at least 12 persons were injured and dozens of vehicles damaged and torched by the mobs during a bandh call on Friday in the wake of the terror attack in Pulwama in which 40 CRPF personnel were killed. Read more.

In a first, Prime Minister Narendra Modi has called for an all-party meeting to discuss Thursday’s terror attack in Pulwama. This meeting, scheduled for Saturday, will be the first of its kind called by the ruling NDA in the wake of a terror attack. The agenda of the meeting, it is understood, is to seek a unanimous view of India’s future course of action. Read more.

According to data compiled by the South Asia Terrorism Portal (SATP), a Delhi-based open data source, the number of fatalities in the valley have increased in the last six years after recording a low in the year 2012. It is to be noted, SATP only records killings in cross-border firings and militant encounters and doesn't compile data for killings during clashes. Read more. 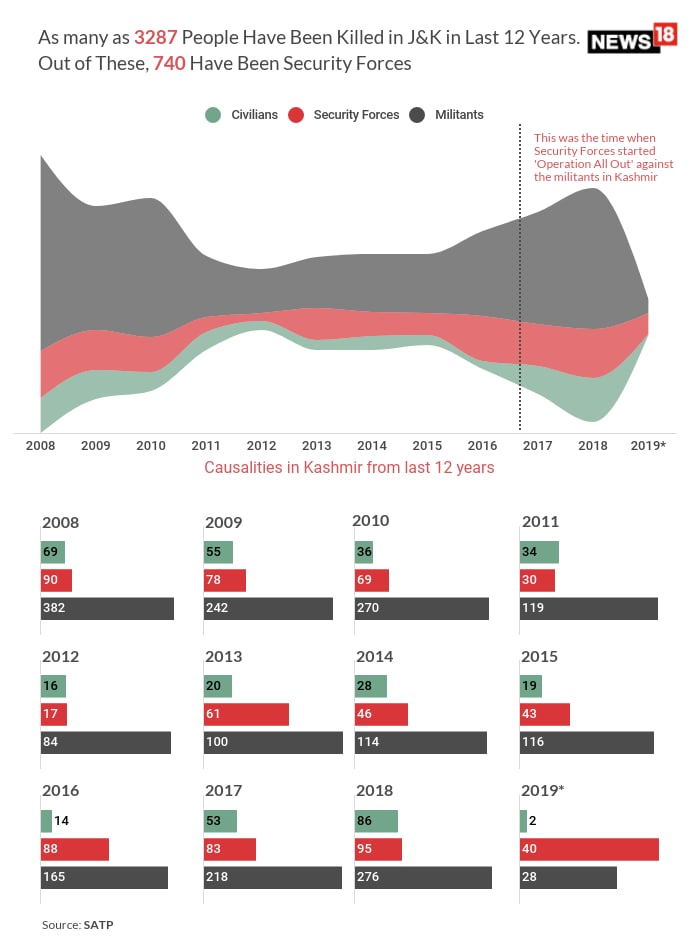 Thursday's attack proves once again that the Jammu and Kashmir national highway is a death trap for the security forces.Since 2013, almost 11 major attacks have been mounted on the security forces by the militants in which as many as 58 jawans lost their lives. Most of these attacks have been witnessed on the Srinagar-South Kashmir highway stretch, claiming 56 of the 58 security personnel lives. Read more.

Why is the attack on CRPF convoy in Pulwama being called unprecedented? Security experts say that the attack changes the dynamic of insurgency in the J&K. But what makes this attack unique and how should India react to it? Watch News18 Explains to find out.

Hours after the Pulwama terror attack, the governments of several countries came out in outright condemnation of Jaish-e-Mohammed, the terror group which has claimed responsibility for the strike. But, it took the China government over a day to join in the condemnation, even as the world waited for their response. However, despite calling for global cooperation in anti-terrorism efforts, the Xi Jinping government yet again declined to change their stand on Jaish founder Masood Azhar’s designation as a global terrorist under United Nations Sanctions. Read more.

Follow all the latest developments on the Pulwama attack with News18.com's live blog.

It is impossible to be sure if an armoured convoy would have reduced the death toll in Thursday’s suicide attack. What remains a fact is that the demand for an armoured convoy and “better support” from the Centre has persisted for years, but to little avail. Aniruddha Ghosh finds out if increase support from Centre could have hlped CRPF avoid Thursday's tragedy. Read more. It is impossible to be sure if an armoured convoy would have reduced the death toll in Thursday’s suicide attack. What remains a fact is that the demand for an armoured convoy and “better support” from the Centre has persisted for years, but to little avail. Read more.