‘Next Few Weeks Crucial’: India Will Either Contain COVID-19 Like China or go the Italy Way, Say Scientists

In the worst-case scenario, if India fails to control the progression of the disease and goes the Italian way, one can expect more than 3,500 cases by April 15, scientists said.

Chennai: Scientists studying the coronavirus outbreak have said that India has entered a crucial phase in curbing the spread of disease as numbers climb steadily, and they offer two scenarios: a China-like success in containing the disease because of social distancing and self-quarantining or an outbreak straining the health infrastructure.

CNN News18 interviewed two such scientists and one of them, who is touch with the government on predictions and key parameters, put the number of active cases in India over the next two to three weeks between 415 and 1,000 — the wild variance attributable to effect, or the lack of, social distancing and quarantining.

Mathematicians across universities have built probabilistic models using data from WHO and Johns Hopkins University in the US, to map the spread of the disease in various countries. Sourish Das, associate professor at the Chennai Mathematical Institute, utilised a method called “transfer learning”: calibrating the learnings of how the disease progressed in Italy, China and other outbreak-impacted countries, and parlaying it for the Indian scenario.

“If we assume the disease will progress like China and if we can implement a strong self-quarantine with social distancing successfully, just like the Chinese did — which means we will be able to yield the Chinese success in India — then we can assume about 415 cases by April 15,” Das told CNN News18 in an e-mailed response. The figure on the left indicates a bent curve, a success in emulating China, and on the right is a complicated statistical model incorporating disease progression in other countries and interaction between countries.

For its part, India has told private and public employers to let people work from home and cut unnecessary travel, and has imposed a curfew on Sunday. India’s Covid-19 positive cases touched 258, 23 of whom have recovered. “In the worst-case scenario, if we fail to control the progression of the disease, and go on the Italian way, we can expect more than 3,500 cases by April 15,” Das warned, adding that it is unlikely to touch so many cases considering India’s younger demographic: “I strongly believe an Italian scenario is very unlikely. Because the average age in Italy is 45 — one of the highest in the EU. On the other hand, the average age in India is 28, one of the lowest in the world.”

However, the dependence on data collated across countries needs to be looked at critically as it may overlook uniquely Indian parameters such as community behaviour, weather and so on. Another scientist, professor Sitabhra Sinha from the Institute of Mathematical Sciences in Chennai, had said there not enough clue as to why R0 (a parameter to indicate spread of the disease from one person to another) for India is low. 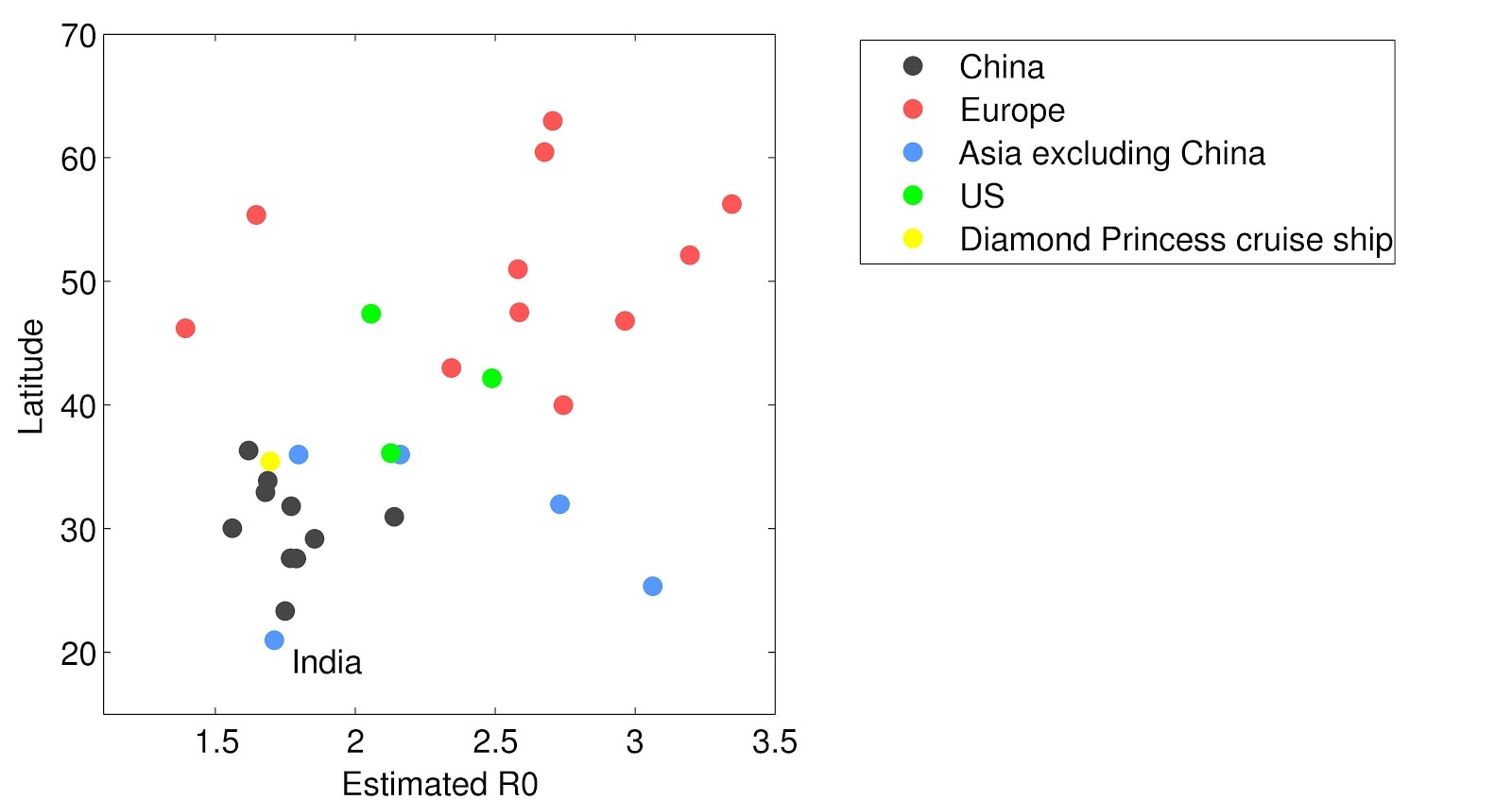 “As you can see from the figure (above) there is indeed quite a bit of variability in R0 calculated from the 30 places which have the highest number of cases reported. India's R0 of around 1.7 is at the lower end of these reported numbers. We don't have a clear idea as to why this is so.”

The National Disaster Task Force has been in touch with Professor Sinha, who has shared India Ro and predictions for the next few days.